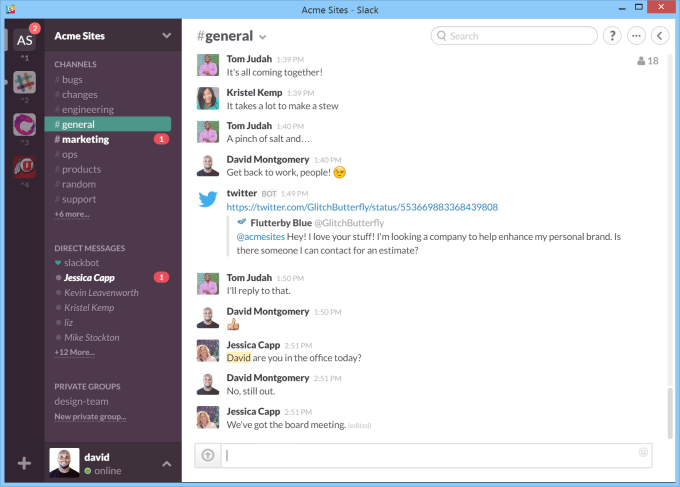 If you use Slack on Windows, you’ve probably found yourself feeling a bit… unloved. Despite making up over a quarter of Slack’s user base, using Slack on Windows has always meant running it in a browser tab — unlike with OS X, Android or iOS, there was no dedicated Windows app.

Well, today’s your day. Slack has, at long last, released a Windows app.

In case you’re unfamiliar, Slack is perhaps best described in an overly simple way: It’s a private chatroom for teams. Think Hipchat, but prettier and with the ability to integrate anything from Dropbox to Giphy with just a click.

So why is a dedicated app better?

First and foremost, it just makes jumping in and out of Slack easier. It lets you run Slack in its own window, give it a home in your start menu, and gives you something to alt-tab to that isn’t one of the many browser tabs you might have open.

It also means you get chat notifications that are more tightly integrated into the OS, the ability to jump between multiple Slack teams in one window (as opposed to a separate tab for each team), and neat tricks like the ability to tuck Slack into the task tray until you actually need it. Plus, it just feels a whole lot nicer.

You can find Slack for Windows right here