At the end of last year, Twitter began to focus in earnest on upgrading its suite of tools designed to help users dealing with abuse, threats, and other forms of harassment that took place on its service. Today, the company is making yet another change along these same lines – it’s adding a new feature that will make it easier for affected users to report abuse to law enforcement.

The new feature isn’t exactly a one-click process, nor does it immediately put the report in front of law enforcement agents directly. Instead, the added option appears after a user files a report with Twitter about a threatening tweet they received. On the last screen, they’re then presented with an option to receive a copy of their report via email.

By selecting this option, the Twitter user will receive an email package that includes the threatening tweet and URL, the Twitter username of the account making the threat, a timestamp of the threat and the report itself, as well as the victim’s own account information, explains the company via a blog post announcing the addition.

This email concludes with a link to Twitter’s Law Enforcement Guidelines, which provides more information for authorities, including how they can go about making requests for non-public user account information from Twitter itself.

“While we take threats of violence seriously and will suspend responsible accounts when appropriate, we strongly recommend contacting your local law enforcement if you’re concerned about your physical safety,” says Twitter on its post this afternoon. “We hope that providing you with a summary of your report will make that process easier for you.” 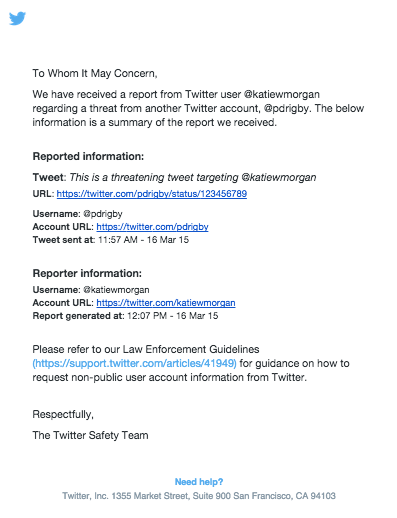 The change follows a series of upgrades to Twitter’s service which are aimed at cutting down on the abuse and threats that take place as Twitter users hide behind anonymous accounts in order to harass their victims. In December, the company rolled out a suite of new tools which allowed Twitter users to more specifically detail their abuse, and it made further changes to how Blocked Accounts operated. At the same time, Twitter said it would increase its response times for handling abuse, too.

Then last month, the company said it would crack down on serial offenders by tracking their phone number. That solution was not perfect, of course, because a troll could abandon their account and just start a new one that’s not associated with the phone number being tracked. Plus, it hasn’t been a requirement that users provide Twitter with a phone number when setting up a new account. But that changed to some extent earlier this month, when it appeared that, in many cases, those using the anonymous web browser Tor had to provide a phone number in order to create a new account. (Twitter said this was not a requirement, but was “occasionally” the case. It said that it would sometimes ask for phone numbers when user behavior resembled that of spammers.)

Twitter has faced a problem with trolling and abuse for some time, which CEO Dick Costolo said was impacting its ability to grow. In an internal memo leaked earlier this year, the company acknowledged the issue directly. “We suck at dealing with abuse and trolls on the platform and we’ve sucked at it for years,” wrote Costolo. “It’s no secret and the rest of the world talks about it every day. We lose core user after core user by not addressing simple trolling issues that they face every day.”

Until more recently, Twitter has been fairly reactive instead of proactive when it came to dealing with abuse on its service, but several high-profile cases of harassment have brought the problem into the limelight, including the #gamergate saga as a whole, as well as things like the harassment of Robin Williams’ daughter after her father’s death, to name just a couple of examples. And on the same day that Twitter announced this feature, news broke that Ashley Judd, another celeb victim of Twitter abuse, would be pressing charges against Twitter trolls.

Twitter says the new email reporting feature is beginning to roll out today.