Photobucket is today announcing the acquisition Lasso, a private photo-sharing and chat app that was designed to simplify the challenges around requesting photos from family and friends. The deal will see Photobucket bringing one of its original founders back into the fold, as Alex Welch, Lasso’s co-founder, will now rejoin the team and serve as an advisor to Photobucket going forward.

Lasso’s other co-founder Chad Podoski is also joining Photobucket, where he too will hold the role of “thought leader” like Welch, as well as the day-to-day duties involved with mobile development. Podoski has built a number of apps besides Lasso, including Flickpad, Smackback and Teletweet. (Smackback, a stickering app for Snapchat, was also published under the Lasso Media name.)

The deal was a combination of cash and stock, but specific terms are not being disclosed.

“Alex and Chad bring many years of mobile expertise to Photobucket and I’m thrilled to have them join the team,” said Tom Munro, CEO of Photobucket, in a statement regarding the deal.

You may remember Lasso’s launch back in summer 2013, as one of what was then a growing number of mobile apps focused on more private sharing. The problem the startup was trying to solve was the fact that there was no easy way to quickly share a series of photos with your friends outside of posting to social media sites, like Facebook.

Typically, users who want to share photos more privately would have to send them out via SMS or email, but that only solved one aspect to the problem with sharing – the process of sending the photos. 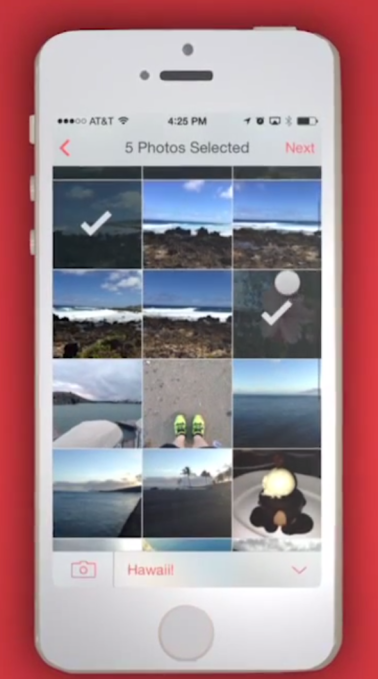 What made Lasso different was that it also built a tool that allowed users to request photos from their friends, too. That is, you could ask your friends on the app to share their photos with you just by swiping across their name. In more recent months, the company pivoted a bit to focus more on chat, with options that let you quickly share a location, ask a friend where they are, or photo-share via the chat interface.

However, as with many apps in the mobile chat or private social networking space, Lasso was challenged to grow its user base to the point of becoming a sustainable business.

Though a well-designed app, it tanked in the App Store rankings after its debut and never recovered. It barely broke into the top 250 in the competitive “Photo & Video” category in the summer of 2013, then fell out of the rankings entirely by the beginning of last year, according to data from App Annie (which doesn’t track ranks below #1,500.) Lasso never raised additional funding beyond its 2012 $1.3 million seed round from Greylock Partners, Trinity Ventures and others.

The company says it had a small but active user base, but the deal will mean the app will now be put in front of millions of Photobucket users.

With the acquisition, Lasso will now become a product in the Photobucket portfolio of mobile apps – something Photobucket hinted it was planning on growing following its most recent funding round. That round, which is still ongoing, saw the company pull in an additional $3.6 million in order to expand its printing solutions and its mobile footprint. At the time, Kate Hare, Photobucket’s chief product and marketing officer, noted that a mobile app acquisition was on the near horizon.

In the near term, Lasso will remain a separate app. However, with Photobucket’s resources, the company is planning to invest more into the Lasso app and into mobile overall. For starters, Photobucket will add a photo-printing option to the Lasso app later in the year, it says.