Behind every product is a product, almost invariably a computer-aided design (CAD) software package known as Solidworks. If you are a designer and want to draft a belt buckle for a new handbag, you have to use this software to carefully extrude the metal contours so that it is ready for manufacturing. Nearly every physical object we use – from our iPhones and headphones to our paper towel holders and toilet seat covers – started off as bits inside a computer.

Solidworks is now twenty years old though, and the package is starting to show its age. Collaboration is immensely tough, since it continues to use a file model not dissimilar from Microsoft Word. When you have product development teams with dozens if not hundreds of members, separating out parts of a product and tracking changes across sub-teams becomes an almost impossible problem to tackle.

That’s why a number of veterans of Solidworks, including its original founder Jon Hirschtick, have come together to completely reimagine how product design can happen in the age of the cloud. In the process, they have built an online software product that is nothing short of a technological marvel. 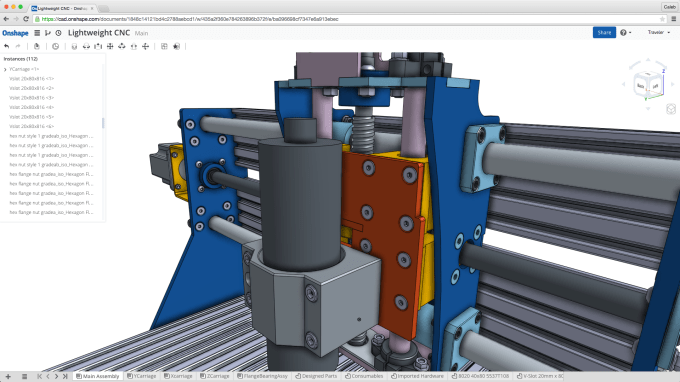 Onshape, which launched in public beta today, is an eye-popping product. Product designers can now edit and share their CAD designs across computers, and even more amazingly, across devices. All in the browser. All in real-time.

The team’s secret is to take a hybrid approach to calculating the surfaces and motion of a product. In addition to using the processor of the user’s device, Onshape also connects to a cloud infrastructure to immediately render complex products, regardless of the technical capabilities of the device. When a user changes a part of a product like increasing the bevel of a corner, the device immediately synchronizes with the cloud to compute the new geometry. From the user’s perspective, there is almost no lag in the rendering at all.

What particularly caught my eye though during a demo last week was the touch interface available on smartphones. While moving around the viewport and zooming into various parts of a design were quite fluid, the real surprise was the ability to actually edit components of a product right from the device. As one founder told me during our discussion, “You can be at the airport and say someone wants another hole in a product. Now you can actually do that as you are boarding the plane.”

Building a CAD system from scratch does not come cheap. Hirschtick said that “building a new CAD company is like starting a new car company.” The team has already raised $64 million across three rounds from North Bridge, NEA, and Commonwealth Capital Partners before launching its public beta today. Already, the team has grown beyond fifty individuals at the company’s headquarters in Northwest Cambridge. 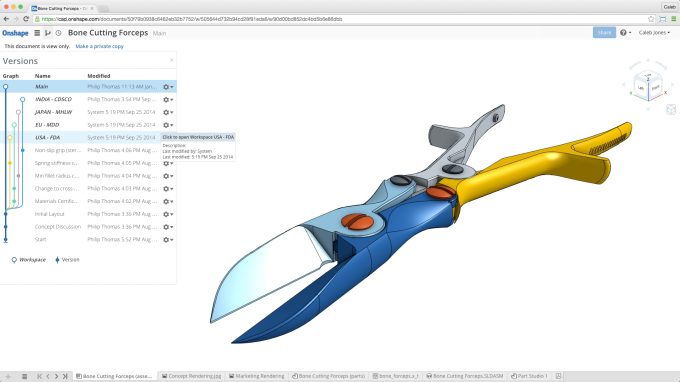 But of course, building all of this in the browser is just table stakes in a mature business like product design. The real value of all of this cloud infrastructure is how it can change the way that teams operate.

A lot has changed since Solidworks was launched two decades ago. Engineering teams are now more globalized than ever, with little expectation of being in the same time zone let alone the same continent. Product complexity has also increased, necessitating larger engineering teams with more sophisticated product design strategies. And of course, the kinds of devices we use every day have changed.

Onshape provides what is essentially a GitHub for CAD interface to its users. Users can now easily branch a product in different directions, and later merge their edits back together. John McEleney, another founder of the startup and a former head of Solidworks, said that in the past, “If they work on the wrong files, people only realize it much later when then manufacture them.” Such mistakes could have real financial and timeline consequences for companies racing to get products to market.

In addition to the ability to safely work on models, the team has also created a real-time collaboration system for engineers working together. One feature of Onshape allows a user to track another user’s viewport and follow it around. So if you are on a conference call, you can now easily follow a discussion about a product simply by watching your projector or iPad.

All of that cloud software also means the elimination of software licenses and actual installed software. With today’s product launch, individual users may sign up for a Free Subscription Plan, and others may buy the Professional Subscription Plan.

While some companies may be concerned about leaving all of their data in the cloud, Hirschtick believes this approach is the future of the industry. “People say they are worried about my data in the cloud,” he explained, “The response is that you should worry about your data not being in the cloud.”

So far, the approach of Onshape has caught on among a number of early users. The company has had about 1000 users testing the platform so far, building the next generation of products across a range of industries. While the product already sports a full suite of features, the company will also be launching others including a drafts mode in the next few months.

The internet may be maturing, but there remain whole industries that still look like they have never left the era of Windows 95. Onshape has an opportunity to provide a quantum leap to an industry that is the mother of all of our products.