With the shift to mobile devices, businesses today have a need to reach their customers wherever they are – and that includes marketing to their customers outside of email alone. A Y Combinator-backed startup called Outbound wants to help today’s marketers run campaigns that go beyond just tracking “opens and clicks,” and can also reach customers using mobile-friendly channels like push notifications, SMS and even in-app messages.

The problem is something with which Outbound’s co-founders, Dhruvkaran Mehta and Josh Weissburg, are personally familiar. The two previously worked together at the car-sharing company Getaround, where Weissburg was focused on activation and Mehta was the engineer who worked on growth alongside him.

At Getaround, one of the challenges Weissburg faced was getting car owners who were listing their vehicles on the service to finish the process of creating their profile, he explains. People would get stuck on different steps and would just drop off. He then needed to be able to reach these particular customers wherever they were at the time – on the web or on mobile, for example – and encourage them to take the next action needed to complete the process.

Setting up these targeted campaigns to reach the customers in question across the various channels was a huge pain on the engineering side, says Weissburg. But the experience gave them the idea to build a product that would make it easier for non-technical people – like marketers – to more easily send out these sorts messages, and figure out what works and what doesn’t.

In summer 2013, the two began building what has now become Outbound, a service that not only lets marketers automate campaigns and send out messages to users based on specific triggers, but also test multiple campaigns against each other and a control group, among other things.

“As businesses realize that populations are moving mobile and most of their revenue is coming from there, they need to start engaging those audiences and keep people coming back to their mobile properties,” Mehta explains. “But what happens is that a lot of the techniques that apply to email are not really applicable to push notifications…We believe, fundamentally, that companies can make more money by sending fewer, but better messages,” he adds.

That is, the businesses need a solution that not only treats mobile as a first-class citizen when it comes to marketing automation, but also helps the business figure out what’s the best means of reaching those customers and then measuring if their goals were met.

Instead of just getting customers to open an email and click a link, for example, a business using Outbound may be trying to get users to complete a profile, add payment information, finish a sign-up process, fill in missing information, upgrade an account, and so on.

With Outbound’s service, marketers don’t have to sit down and have lengthy conversations with their company’s engineering team to build out their messaging platform, or turn to sometimes expensive marketing automation software that can fail to address their need for a multi-channel strategy. Instead, marketers can go online to Outbound’s website to start immediately creating their desired campaign, including information like what user actions will kick it off, what they want users to do in return, and how (e.g. push, email, SMS) they want to reach those users. 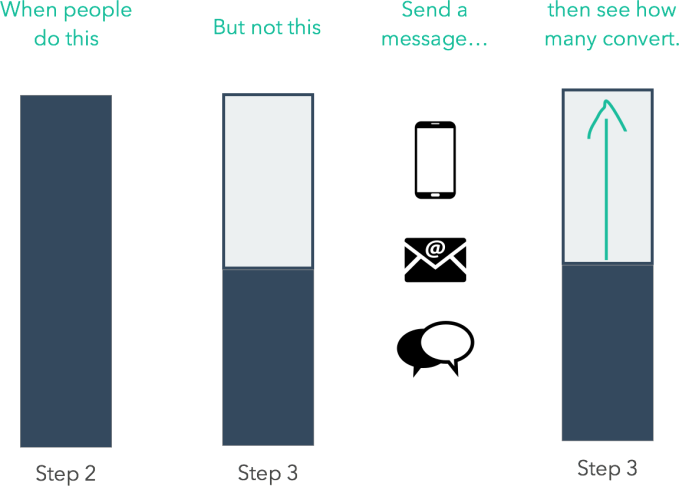 The service then returns a “to do” list customers can bring to their developers that tells them the exact API calls to make. Or, in the case of those who are already sending their data to the online hub at Segment.com, using Outbound is only a matter of toggling a switch to turn it on.

After the campaigns are running, marketers can watch the results in real-time on Outbound’s online dashboard, as well as track historical data and trends.

The company first launched its service publicly in summer 2014, at which time it was focused more on funnel messages. Earlier this year, however, it expanded to include support for more sophisticated logic and A/B testing. Pricing for the service ranges from $149/month (2,000 active users) to $899/month (30,000 users) depending on company size. (The pricing is based on the number of active users being messaged, but not how many messages are sent out.)

Today, Outbound is working with 16 companies including those in the educational space, financial services, and healthcare in particular. Some of its customers include HealthLoop, uBiome, eTherapi, GetSmarter, and Omada Health, to name a few.