Dish’s newly launched streaming video subscription service Sling TV announced this morning the addition of two more channels, AMC and IFC, which will now become available as part of its $20 core package aimed at cord cutters. In addition, Sling TV customers will also be able to optionally subscribe to a new movie-focused add-on pack called “Hollywood Extra” for $5 per month, which includes content from EPIX and Sundance TV.

Specifically, the “Hollywood Extra” pack brings in content from EPIX, EPIX2, EPIX3, and EPIX Drive-In, the company says. The pack also introduces a replay feature which will allow viewers the ability to watch programming that’s up to a week old on demand, as an alternative to using a DVR.

That’s a larger “catch up” window than Sling TV offers for some of its other channels, like HGTV and Food Network, for example, which have a three-day catch-up option available. Meanwhile, other channels like those from Disney-ESPN and Turner offer no catch-up window at all, which points to one of the challenges that Sling TV is having in negotiating these deals with content providers – everyone wants to set their own terms. But in doing so, it can lead to consumer confusion about what’s actually available and for how long. It also doesn’t help to make the case for switching away from a cable company’s DVR to on-demand streaming, as content availability is still so varied at present. 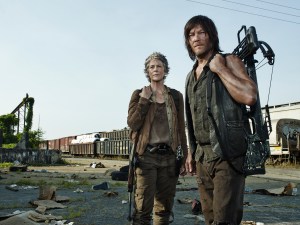 With the arrival of the newly added channels AMC and IFC, customers will have access to some of cable TV’s top-rated shows, including popular AMC series like The Walking Dead, Better Call Saul and, in the near future, Mad Men, as well as the IFC series Portlandia. These channels will now be a part of the base package Sling TV sells, which also includes ESPN, ESPN2, TNT, TBS, Food Network, HGTV, Travel Channel, IFC, El Rey, Adult Swim, Cartoon Network, ABC Family, Disney Channel, CNN and Galavision.

The two new channels will also offer the three-day catch-up window for some of their content at launch.

Video-on-demand content from AMC, IFC and Sundance TV will be made available “soon,” the company notes in its announcement, as will 2,000 movie and other entertainment titles from EPIX.

Sling TV had previously announced an agreement with AMC Networks, which also included the rights to stream programming from BBC America, BBC World News and WE tv. However, the company isn’t currently offering details as to when these channels will become available, it notes, only saying that customers will hear about those channels’ availability in the “coming weeks.”