Imgur has returned to mobile apps after it launched a new iOS app for its library of addictive photos and GIFs. The company released native apps for iOS and Android in the past, but they were shuttered due to limited success.

This time around, Imgur has taken a very different approach — the app doesn’t resemble the website at all, it’s very much a mobile app in its own right. And that’s a good thing.

The app uses swipe-based interactions to cycle through Imgur’s vast treasure trove of still images and GIFs, allowing users to comment and favorite just as they do on the desktop web version. Interestingly, the app uses horizontal scroll rather than vertical. You can discovery images via two settings on the main screen — ‘popular’ and ‘newest’ — while there is a ‘random’ and a ‘user sub’ that also surface content. 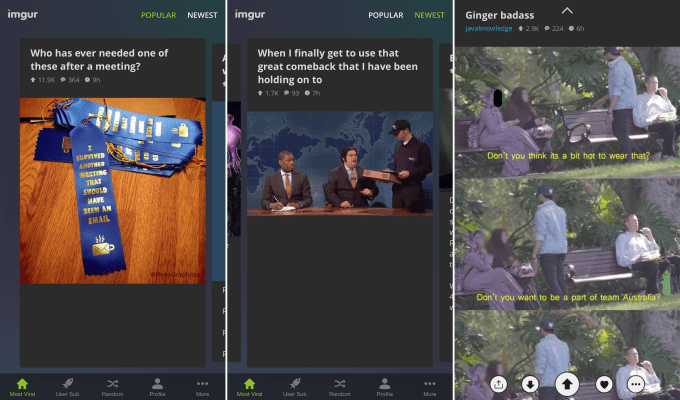 The app is initially available for iOS, but an Android version is already in development and should be released in the coming few months. The plethora of third-party apps that have sprouted up to take Imgur mobile will continue to be supported via the company’s API, Imgur CEO and founder Alan Schaaf told TechCrunch in an interview.

Schaaf said the six-year-old company adopted a mobile-first mindset with this release, with a focus on a clean user experience. There are plans to add topics — the new discovery feature that launched on the web last month — while an option to upload images from your phone — a fairly criminal omission at this point, in my opinion — will also arrive soon. 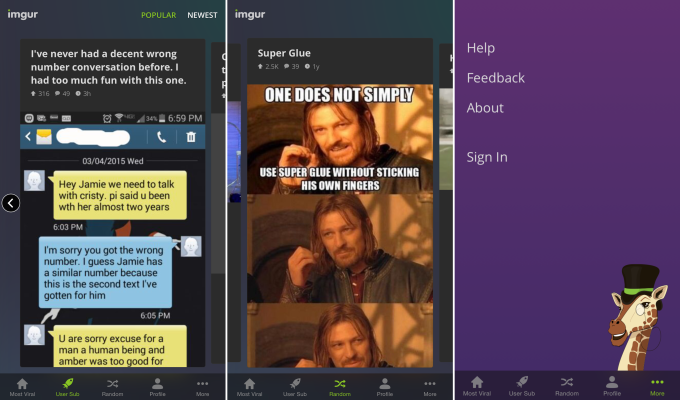 Schaaf said that the app has been in development since the company raised funding last year — a $40 million round from Andreessen Horowitz and close partner Reddit. Rather than going out and acquiring a third-party, the company build it from scratch in order to cater to the experience that they believe their users are expecting.

Imgur is seeing “millions” of images added each day, and a colossal 60 billion images are viewed each month. The core demographic is aged 18-34 and, as you might expect, the younger section of that userbase tends to spend more time surfing the web via mobile, rather than desktop. That makes a solid mobile app a very important part of what Imgur offers.

The company said it went with iOS first because it believes that Apple device owners are more engaged, and also it said that they had been more vocal with providing feedback about its mobile app plans.

The app is now live and you can get it here.