First, a backstory: I’m fat. It happened as I got older. I’m 31 now and feel horrible. Like many others I turned to activity trackers and quickly discovered they don’t make you not fat. And then I stop wearing it.

This is common and one of the chief concerns Garmin is addressing with the Fenix 3. It looks and works like a normal watch. Just don’t call it a smartwatch. It sports some basic smartwatch functionality, but it’s mainly a glorified activity tracker. And I like it. After two weeks, I’m still wearing it, which is one of the biggest endorsements I can give a product.

After two weeks, I’m still wearing it, which is one of the biggest endorsements I can give a product. 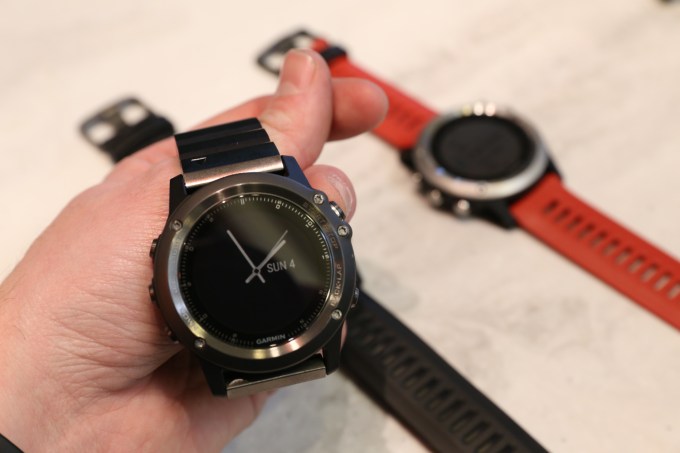 The Fenix 3 is a looker. That’s part of its appeal. It’s gorgeous and feels like it can take a beating. This variant has a stainless steel band and sapphire crystal. It feels like a proper watch — but this is a proper watch that can also track your steps and tell you tomorrow’s weather.

Garmin is quickly embracing wearables as smartphones continue to gobble up the personal navigator market it was once known for. The Fenix 3 is the firm’s third generation flagship model. Like its predecessors, it’s an activity tracker loaded with the ability to quantify nearly every type of activity. From walking to hiking to swimming to participating in a triathlon, the Fenix 3 can provide data for all of them. The watch can even identify swimming strokes.

But perhaps the Fenix 3’s biggest selling point isn’t functionality, but design. It doesn’t look or feel like an activity tacker. It feels like a high quality sports watch. The Fenix 3 starts at $500 with a model that comes with a rubber strap and a standard crystal. Spend $600 and get a model that sports a tougher sapphire crystal and a both a metal and rubber strap. They both offer the same features. The more expensive model is used for this review. 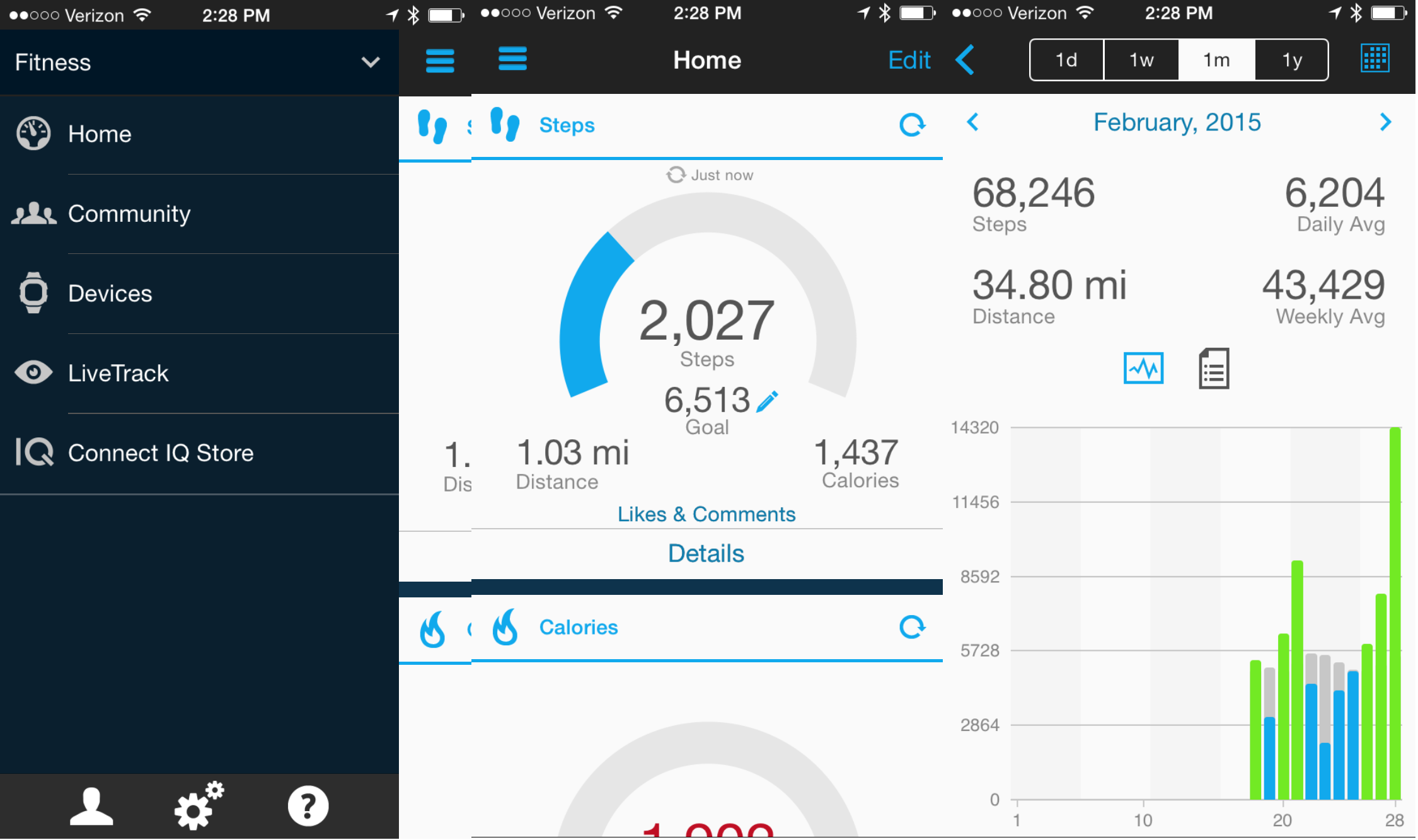 The Fenix 3 is foremost an activity tracker. Want to just track your steps? The Fenix 3 can do that. And it does it well. I found the Fenix 3 to be a capable pedometer.

But don’t buy the Fenix 3 just to track your steps. It can do so much more.

But don’t buy the Fenix 3 just to track your steps. It can do so much more.

The Fenix 3 can pair with a multitude of accessories including heart sensor and bike cadence trackers. It’s designed to perform as a fitness command center.

Out of the box the Fenix 3 can provide data for running, skiing, climbing swimming, hiking and biking. Pair it with one of the aforementioned accessories and the data will be more accurate. This is where buying into the Garmin ecosystem pays off.

This is a standard affair for Garmin now. The company offers several less expensive (read: made out of plastic) watches that offer the same pairing ability. Everything from Garmin’s basic fitness trackers can pair with the heart trackers and other accessories. The Fenix 3 is about recording this data with style.

The Fenix 3 uses a color e-ink display. It’s not perfect and can be a bit hard to read in the dark. The backlight helps a lot in low light. The screen is lovely when in direct sunlight or a well-lit area.

The screen is responsive and quick. E-ink’s traditional wiping effect is missing. For instance when using the stopwatch, the numbers briskly appears and can be clearly read.

The screen is always on but the battery isn’t effected. That’s one of the advantages of e-ink over LCD displays. They use much less battery. I easily got a week of battery life from the watch. Garmin says you can expect a longer life if features such as Bluetooth connectivity and GPS are not used.

This watch is gorgeous. It simply is. It can sit proudly next watches from other manufactures and not feel out of place.

Garmin explained to TechCrunch that the design was done in-house. At 51mm the watch is large but not huge. The casing is steel and the crystal on this more expensive model is sapphire. Standard glass is used on the cheaper model.

The watch charges through a proprietary charging cable. It snaps onto the back and works well. But if it’s lost, the cable is not interchangeable with other Garmin charging cables.

Being more than just an activity tracker is the Fenix 3’s value proposition. It works with a connected smartphone. The Fenix 3 displays notifications, the weather and your calendar. But that’s where the fun stops. There is an app store for the Fenix 3, but it’s barren and worthless. The few apps it offers do not add any value to the feature set already found on the Fenix 3.

Still, the included features work well. Notifications that pop up on the display are easy to read. But all you can do is read them, not respond. The weather and calendar screens are just a few clicks away. But again, items here cannot be edited, only viewed.

Sadly the watch also randomly drops the Bluetooth connection. It’s not as stable as it needs to be.

Garmin could drastically improve the Fenix 3’s value with worthwhile apps. As the product sits now, it offers little additional functionality beyond the company’s less expensive offering. And the Fenix 3 has a lot going for it.

The Apple In The Room

Right now, as of early March 2015 when this review was published, the Fenix 3 is on my short list of wearables worth buying. It offers class-leading features in a handsome design. It hits all the right buttons for me. But at $599 it’s expensive — and potentially $250 more than the Apple Watch.

Garmin is going to have a hard time selling the Fenix 3 once the Apple Watch hits the scene. The Apple Watch is set to be a smartwatch with activity tracking features — effectively opposite of what the Fenix 3 offers. There will likely be more smartwatch features and comparable activity tracking potentially minus some of the more hardcore activities like swimming or hiking.

Plus the Apple Watch will launch with an impressive host of 3rd party applications.

Right now, as of early March 2015 when this review was published, the Fenix 3 is on my short list of wearables worth buying.

Do you need more smartwatch features than simply seeing notifications on your wrist? Then you should look elsewhere. Garmin likely will not be able to court enough developers to build a worthwhile application offering.

So should you buy the Fenix 3? Perhaps. By itself, it’s a great device and perhaps one of the best activity trackers on the market. If the Apple Watch isn’t for you (say if you use Android), then it deserves your buying consideration. It’s that good.