Popular security software company Avast is the latest overseas technology company to get caught in China’s censorship net after users began reporting that its service and website were blocked inside the country.

Data from GreatFire.org shows that Avast.com has been unavailable in China since Sunday. Users of Avast — which claims over 220 million global users of its antivirus and security products for Windows, Mac and Android — posted screenshots on Weibo, Avast’s forum and other sites showing issues.

Perhaps by coincidence, a recent Reuters report claimed that overseas antivirus firms Symantec and Kaspersky Lab had been removed from a list of approved anti-virus software vendors for state organizations.

Update: “We can confirm that Avast is being blocked in China and that we are actively investigating the situation,” an Avast spokesperson told us.

Gmail, among other Google sites, has yet to return to its usual levels, which has caused issues for business that rely on it for communications, while the blocking of HSBC’s online banking service and Verizon’s Edgecast network had repercussions. The blocking of Avast may also trigger similar frustrations from companies based in China that rely on its service (which includes a dedicated enterprise service) to maintain their security. 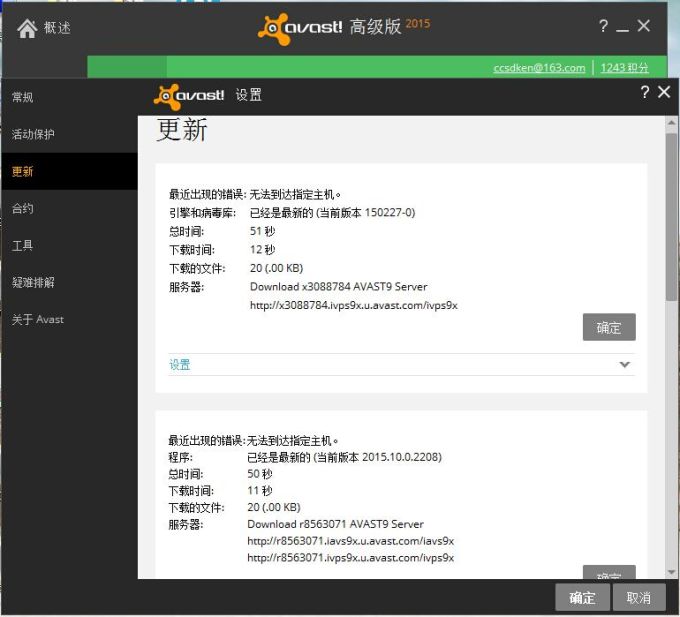 It has been suggested that the crackdown on Avast could be related to a recent clamp down on VPN services, which lets users access blocked websites from inside China. There is a VPN component to Avast’s software suite, but we’ve also heard unsubstantiated rumors that the company recently refused to provide its source code to the Chinese government, as tech firms are now required to do according to a new draft law. If the latter is true, that may have led to its censoring.

It isn’t clear why Avast is blocked, as is very often the case with censorship in China, but the incident is another factor that underscores the growing challenge of doing business in China. While there are plenty of local alternatives, many companies are preferential to services from established overseas vendors.

Other notable companies blocked in China in recent times have included Instagram, Line, Kakao Talk, and Viber. Facebook and Twitter are, of course, among the long-standing absentees from China’s internet space due to censorship.