Samsung has indeed revealed its new flagship smartphone today, but there are actually two: The Galaxy S6, and the Galaxy S6 edge. The company’s latest premier smartphones are mostly similar on the inside, but with different external body designs, both of which push the envelope in terms of what Samsung has done with its Galaxy lineup in the past.

The Galaxy S6 and S6 edge combine metal and glass, eschewing almost entirely the standard plastic setup that Samsung has show a preference before in previous smartphone designs. A metal frame runs throughout, sandwiched between two panes of durable Gorilla Glass 4, which has also been treated on the inside with a special reflective material coating, giving them a jeweled-metal look that explains why some early leaks made it seem like Samsung had opted for metallic rear casing surfaces.

While both are marked departures for Samsung, the Galaxy S6 edge may be its most ambitious design to date, with a screen that curves away on either side of the front of the device, and a subtler, matching curve on the back surface, too. The effect is both visually stunning and pleasant to hold, as you can read in our first hands on impressions of both devices.

Of course, the S6 lineup also boasts improved specs, including a slimmer and lighter design, compared to the S5 and older Galaxy hardware. Here’s a breakdown of the primary improvements:

Specs never tell the full story, and Samsung has done plenty more to try to make this a significant flagship reboot inside and out. The f/1.9 aperture on those front and back cameras should translate to improved low-light function on each, and the auto HDR and image stabilization options also help contribute to the goal of making it much easier for device owners to snap great pics. Samsung has also added a feature whereby double pressing the home button launches the camera instantly, in what it claims is just 0.7 seconds, no matter where you happen to be or from device lock. A subject lock borrowed from the NX-1 dedicated Samsung camera lets you continually autofocus on a specific subject, too. 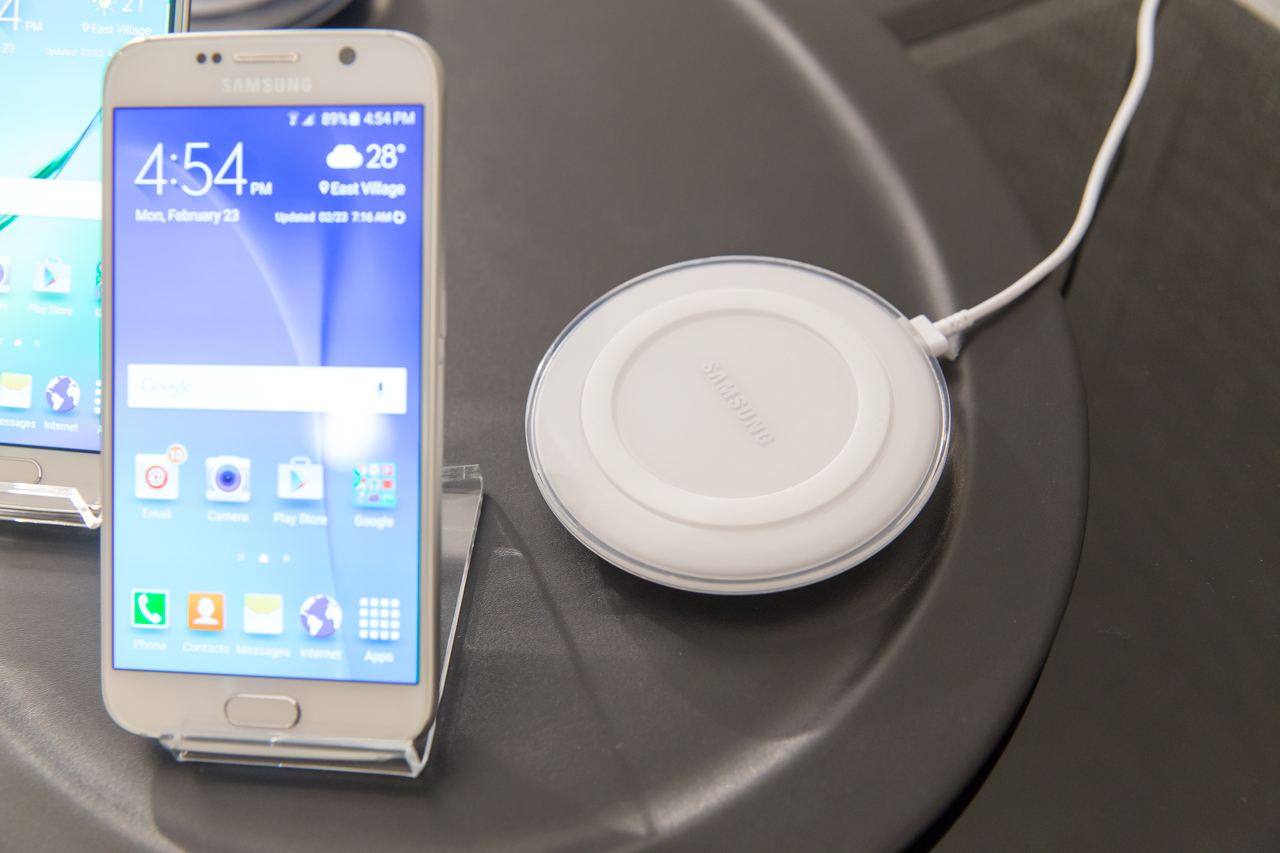 As rumored, the phone also has embedded wireless charging tech, which includes support for both WPC and PMA standards, meaning you can use it with Starbucks, as well as with the more prevalent Qi-enabled home chargers. Samsung is also going to sell its own charging pucks, of course, and on the power front they’ve also upped wired charging by a factor of 1.5x, meaning you should get around 4 hours-worth of battery out of 10 minutes of plugged-in charging.

There’s no swappable memory card support, but the new UFS 2.0 tech Samsung used for its internal flash memory is much faster than any external card or previous internal storage, the company says, and it now offers that 128GB option for those who need ore space, as well as cloud services for remote storage.

Samsung has also redone the fingerprint scanner in the home button so that you no longer have to swipe, and they’re going to use that with the launch of their Samsung Pay tech coming later this year. Finally, they’ve lightened up their approach to skinning Android (UI add-ons removed by 40 percent, in fact, according to Samsung), and don’t even mention the word ‘TouchWiz’ anywhere, which is great news.

The Galaxy S6 and S6 edge go on sale starting April 10  in markets around the world, with White Pearl, Black Sapphire, and Gold Platinum color options for both, plus a special Blue Topaz for the Galaxy S6, and Green Emerald reserved for the Galaxy S6 edge. In the U.S., they’ll be available at AT&T, Sprint, T-Mobile, U.S. Cellular and Verizon, as well as Samsung’s micro-stores within Best Buy locations, Amazon.com, Costco, Sam’s Club, Target and Walmart.