Anyone who has worked a retail job knows what a pain it is to take time off. You usually have to find someone to cover your shift and, unless you’ve managed to arrange your schedule in advance, that often entails panicked texts and phone calls to co-workers. A new startup called Shift Messenger wants to make the process less painful.

Backed by Y Combinator, Shift Messenger was founded by Austin Vedder and Matt Tognetti. Former Redbeacon employees, the two got a look at the scheduling problems faced by retail workers after the home services marketplace was acquired by Home Depot.

Since most retail employees don’t have company email addresses or tools like Slack, they usually depend on a handful of co-workers that they can text or call for last-minute shift changes.

Complicating things further is the fact that many retail and restaurant workers have schedules that change every week or month. About 30 percent of shift workers also juggle multiple part-time jobs.

“In an office environment, you can rely on co-workers who work at the same time as you, but the shift environment is constantly changing,” says Vedder. “At Redbeacon, we had Gmail, Slack, Asana, a Path group, Gchat, but in a retail environment you are dependent on those three or four people on your smartphone list.” 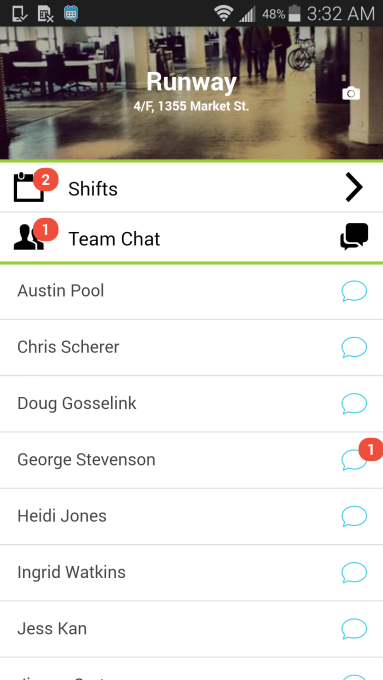 Shift Messenger solves the problem by giving employees a messaging app that is specifically designed to help them swap shifts. Workers create a group with colleagues at the same location to share requests, and then send messages individually or in groups.

You don’t need to connect your phone number or Facebook account to Shift Messenger, which is a plus for privacy because retail stores and chain restaurants sometimes have hundreds of employees.

Alternatives to Shift Messenger include other apps like ShiftSmart, but Vedder and Tognetti view their stiffest competition as the ad-hoc solutions shift workers at individual stores have cobbled together. Text message threads and Facebook groups might not be the most efficient way to swap shifts, but once people get used to a system, it’s hard to persuade them to try something new.

To convince workers to try the app, Vedder and Tognetti previewed the app in about 30 restaurants and stores, ranging from small establishments with just 10 employees to big box stores with 100. Feedback so far has been positive, and Shift Messenger will eventually be localized into other languages to target the 500 million to 600 million shift workers around the world who work in stores, hospitals, restaurants, and hotels.

Shift Messenger will also add a calendar function in the future. Vedder says that many retail workers take a photo or screenshot of their latest schedule for quick access, so that feature will make shift trading much easier. (The problem of time management for shift workers has given rise to specially designed calendar apps, including the recently launched Shifts).

The app is free to download and use. Its founders are thinking about monetizing by adding premium features geared toward supervisors, since they are ultimately responsible for making sure all shifts are adequately staffed. These might include scheduling tools for managers, as well as the ability to broadcast last-minute requests to all employees.