If you’re a writer, you’ve probably heard horror stories about the publishing industry — books that are rejected by publisher after publisher, books that sit in submission piles for years, books that are published but basically disappear without publisher support.

At the same time, self-publishing has its risks for authors, too. You might spend a lot of your own money for an editor and/or a designer, or else you could end up with a poorly edited book and a lame cover that looks, well, self-published.

So Booktrope, part of the current class of startups at Y Combinator, is taking a different approach. On one level, Booktrope is a publisher itself, but one that allows authors to go around the gatekeepers of traditional publishing while still working with a professional team.

Chief Marketing Officer Katherine Sears said that she and her co-founders don’t come from the publishing world, which she argued is a good thing: “We’re coming at this from an unbiased and fresh perspective, but all of us have a passion and a love for books.”

Now, as someone who’s published a book with a small press, and who’s met a number of smart publishing pros, that statement isn’t entirely reassuring — shouldn’t you understand the industry you’re trying to fix? But talking to Sears, CEO Ken Shear (father of TwitchTV co-founder Emmett Shear), and CTO Andy Roberts convinced me they may not come from the publishing industry, but they’re plenty knowledgeable about it, and they’ve also thought through the details of their model.

So if you’re a writer who wants to publish a book, you go on Booktrope and provide information about yourself and your work. Sears said Booktrope doesn’t accept every author, with a selection process mixing automation and human judgment.

However, the company is less focused on assessing literary quality and more on making sure an author will be a good fit for the Booktrope platform. After all, there are plenty of poorly written, badly reviewed books that still sell incredibly well and find a devoted audience.

“I really feel like literary snobbery is not what the public needs,” Sears said.

To be clear, she’s not saying that every title will be a huge success, but Booktrope’s approach is all about letting readers, rather than editors, provide that filter. 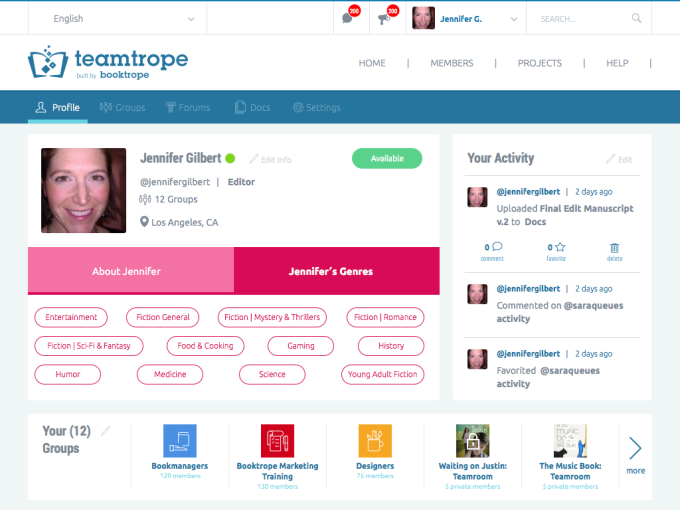 Anyway, if you’re accepted into the system, you then post your completed manuscript on Booktrope and try to attract a team of editors, designers and marketers, who can then collaborate through Booktrope’s online tools. Authors aren’t paying other team members directly, but offering them a share of the royalties. That means the author doesn’t have to pay out of their own pocket for these services, and the team members will have an incentive for the book to do well.

Booktrope distributes both digital and print-on-demand copies of the books through a number of the standard channels, including Amazon, brick-and-mortar bookstores, and subscription e-book services like Scribd. Many of those books come from authors who’ve tried self-publishing but weren’t happy with the results, Sears said, while most of the other team members come from the freelance side of the publishing world.

The company takes 30 percent of profits while the team gets the remaining 70 percent, split in whatever proportions they’ve negotiated. (Shear also emphasized that when Booktrope calculates profit and royalties for each title, it’s not including general company overhead, just production costs for a specific book.)

Sears and Shear said they’ve been working on Booktrope for nearly three years, but they argued their real launch came later, after Roberts joined and built out the technology. Since then, they’ve published nearly 400 titles and distributed 2.5 million copies of those books.