TechCrunch’s startup launch events go back to 2007 with TC40. That inaugural event surfaced some pretty amazing companies, including Mint, TripIt, Xobni and ZocDoc. The conference grew and in 2010, was re-named Disrupt featuring the Startup Battlefield competition. Over the years it grew into a Mecca for young teams to lay it all it on the line in front of top VCs, CEOs and technologists. To date, 508 companies from more than 25 countries have appeared on the Battlefield stage. More than 72% of those startups are still operational, and an additional 13% have exited, including two IPOs. In total, the startups have raised $4.4 billion.

Thanks to Crunchbase we’ve been able to track all that data.

Today, we’re excited to launch a new channel dedicated to Startup Battlefield. It will serve as a hub for past, present and future Battlefield founders, interested investors, media and the tech community. Each Battlefield contestant has a page with TechCrunch stories and company details from Crunchbase as well a leaderboard showing how they are fare against their Battlefield batch. Battlefield events also have their own pages, bringing together all the content, videos, startups details and judges from a given competition.

The real fun is the overall Battlefield leaderboard, which lists all companies that have ever competed, and allows sorting and filtering by event, outcome, operating status and funds raised. The data is also downloadable in a CSV file. Startups can now see for themselves the benefits and outcomes for Battlefield companies. 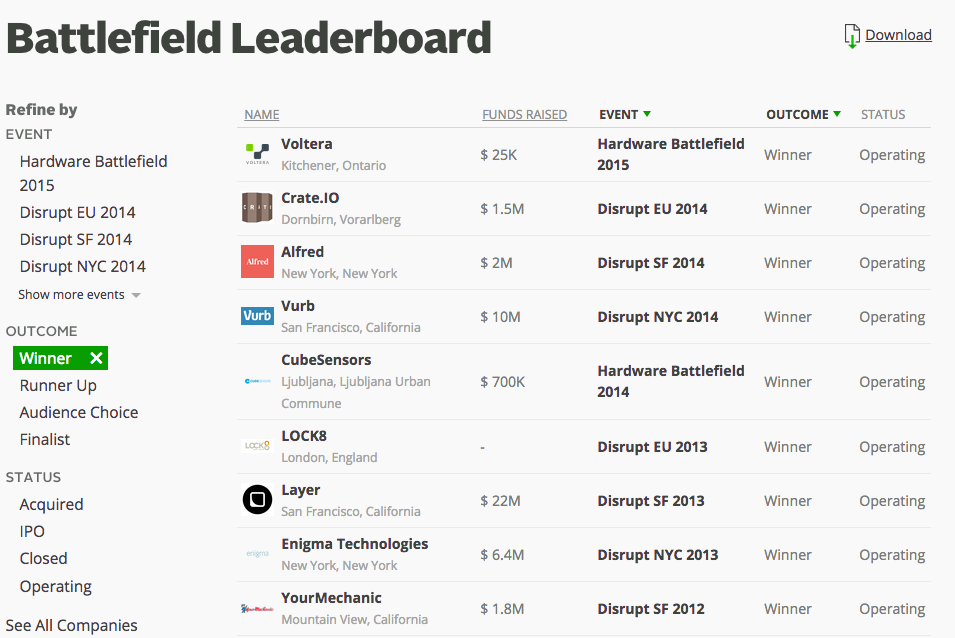 You may have heard of a few of our bigger name exits: Yammer and Mint, or some of our fast growing alums, like Zenefits and Dropbox, but more broadly, who is the Battlefield community and what have they accomplished?

To start, companies are usually between 1-2 years old when they participate in the Battlefield. There are of course outliers, like the 5-year old wireless power company, but since 2011 startups on average are trending younger.

Prior to participation, 31% percent of companies have raised funds and of those who have raised, the median amount was $1.1M. We’ve found median is the most accurate representation of the dataset, taking into considering that startups in certain verticals, for example medical and hardware, tend to raise significantly more than their mobile software counterparts. Among the most common funders are Y Combinator (7 startups), TechStars (6 startups) and SV Angel (15 startups). Benchmark Capital has put the most, 38M, into our startups prior to the Battlefield.

After participation, 27.5% percent of companies go on to raise within 18 months, the average amount being $6.4M, more or less a Series A. The most frequent investor post-Battlefield is First Round Capital, backing 13 companies for a total of $135M. Menlo Ventures follows with SV Angel and Crunchfund who have each closed 14 deals for 13 companies.

Outside of this timebox, Benchmark, Accel and Index Ventures are the most prolific investors with 9+ rounds each and over $300M of capital committed.

Some batches have been more successful than others in the years following the Battlefield event with TC50 2008 year leading the way for average amount raised per startup ($9.5M) as well as for total amount raised. The same is true with our acquisitions over time. The TC50 2007 year leads with 13 acquisitions but of course, newer Battlefield batches could ultimately steal this title as time goes on. On average, companies who exit do so about 2 years after participating in the Battlefield.

On the subject of diversity: While we do not collect gender or racial statistics on our applicants, in 2014, twenty-two female founders competed, and the winners in Disrupt SF were the two female founders of Alfred. In the first competition of 2015, Hardware Battlefield, over a quarter of the startups were founded by women. We also pride ourselves on recruiting not just the strongest startups in San Francisco but quite simply, the strongest startups. Our 2014 applicant pool had startups representing 90 countries and of the actual contestants, 73% were from outside Silicon Valley.

These are just a few of the interesting nuggets in our dataset. We’re confident that the community will find many others.

A note to our alumni: If you see data that is incorrect or incomplete, please let us know and update the Crunchbase profile accordingly. We do our best to ensure data is up to date, however, as with any publicly maintained database, the data is not always perfect.

And of course, no Battlefield post would be complete without a shameless plug for startups to apply. Applications are open on to participate in the Battlefield at Disrupt NY. In fact, in honor of this next step in the program we’re extending the application deadline. That’s right, startups now have until 9pm PT on Sunday, March 1 to submit their applications.