Anthony David Adams has been living with a woman he just met for the past three weeks. According to Adams, the two met and became enamored with one another using an app he created.

His app, Love Actualized, leads couples through a series of 36 increasingly personal questions meant to make any two people fall madly in love. It ends with the couple staring intensely into each others’ eyes for four minutes. The process is based on the work of love psychologist Arthur Aron that was featured in a New York Times article that went viral. Soon, intense online conversations and meet ups started popping up around the idea.

The timing of that article was a catalyst for Adams. It came out a year to the day his girlfriend of three years broke up with him. He woke up, read the article and went on a 24-hour code bender.

Adams is not a programmer by trade, but he can drum up enough code to put together a simple web app. He and his new lady are both life and love coaches at the moment. They met while on a retreat in the mountains. But it’s not clear if the two are actually in love after going through the game.

“I don’t even know how to define what we are right now,” Adams says. “We haven’t said we are boyfriend and girlfriend but I’m living in her house. I just know I’ve never liked someone this intensely, ever.”

The relationship seems a bit weird. Adams moved in pretty quick but his new    housemate has just left for a meditation retreat. He’s now house sitting and taking care of her cat till she gets back.

One might conclude this is a relationship of situational convenience. But Adams says he can list off hundreds of other couples he’s helped fall in love with the app.

“I’m helping couples on the brink of divorce and leading groups through the love process. People are writing me that they fell in love on my app,” Adams told me over the phone.

Love Actualized had 200,000 players within the first two days of its creation. It was featured on Product Hunt and was a popular topic of discussion on Reddit and Hacker News when it came out last month. “Mark Zuckerberg even liked it on Facebook,” says Adams. 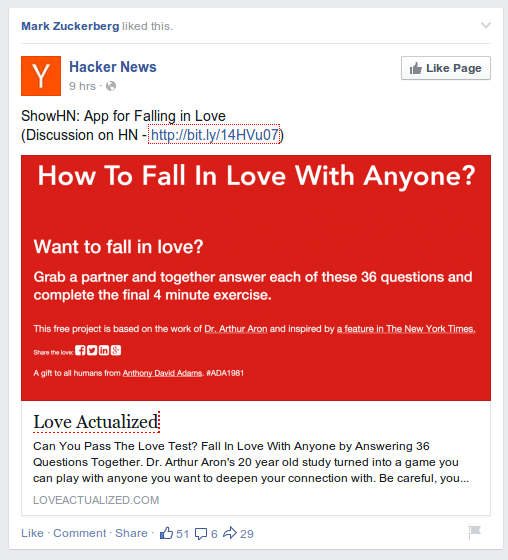 As for the author of that New York Times article that kicked this whole thing off? “You’re probably wondering if he and I fell in love. Well, we did,” she writes.

Not everyone is so lucky. Product Hunt’s Erik Torenberg put together a series of 36 Questions events for couples. He went through the process himself at the first one earlier this month. “I didn’t fall in love, but at our last event we did see two people making out,” he told me.

He says part of that may have been because he was hosting the event and was distracted with that. “We did become friends, though,” he says. There’s another meet up set for Valentine’s Day. Torenberg says he does not have a partner yet for that one (he’s single, ladies).

There are other apps out there besides Adams’ at the moment. There are even a few that adapt the original idea to related subjects, such as matrimony. Marriage Material is one such app that converts the 36 questions into a way to find out if you should marry each other. But Adams claims his app was the first to put together the series.

My boyfriend and I started going through the Love Actualized app version on a recent road trip, but never finished. We were doing it to pass the time before the restaurant we were at could seat us, got interrupted in the middle of it and so far haven’t gone back to it.

I can say, however, that the few questions we were able to get through helped me have a better understanding and appreciation of him. There were little things I didn’t even know we had in common like that we were both born three weeks late. It made me love him more, in a different and deeper way. It seems like a pretty good way to get to know someone on an intimate level that would normally take possibly years to do.

Torenberg says that’s what attracts him to the questions. “A lot of people don’t have space or make time to have deep and intimate conversations. To know and to be known. [The series] provides that space. Whether someone falls in love or wants to be friends or wants nothing further is immaterial. For 45 minutes, you connected deeply with a person. It’s a pretty special thing in and of itself.”