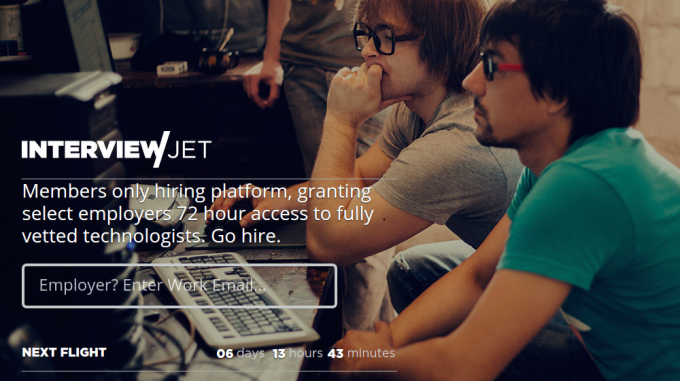 Given the current job market in Silicon Valley, one of the biggest challenges faced by startups and established companies alike is the difficulty in finding and recruiting the best engineers.

If you’re a company that’s got a lot of mindshare, you might not have much trouble getting those hot applicants — or you can raise enough to buy smaller teams. But for those without years worth of networking under their belts, finding new engineers can be a real struggle that takes focus away from the task of actually building a product.

Enter InterviewJet, which gives employers who sign up a weekly curated introduction to experienced engineers with in-demand skill sets — think Ruby on Rails, Python, and mobile developers. Once the introduction has been made, potential employers have 72 hours to lock down an interview with candidates.

InterviewJet co-founder and CEO Joshua Holtzman says the startup has facilitated 1,000 interviews and signed up more than 450 employers to their network since rolling out as a beta in early 2014. With just ten employees, InterviewJet is currently signing up approximately half of the 40-50 companies that apply to join each week and vetting 10-12 new candidates to show off to its member companies.

“Our biggest issue for the foreseeable future is getting more candidates,” Holtzman told TechCrunch in a phone call yesterday. “We’ve built our own sourcing technology that takes advantage of marketing automation and crowd-source lead-gen, we have people scouring the internet looking for individuals with particular skill sets.” But even with all of that, the job market is so hot in tech that Holtzman says many of the potential candidates they reach out to end up asking instead if they could apply to become an employer because their own teams desperately need talent.

Once it’s managed to find suitable candidates interested in seeking new opportunities, InterviewJet takes time to dress up their profiles to improve their chances of landing an interview. Examples of things that might be changed from a candidate’s LinkedIn page/resume include more descriptive titles (which vary between companies) and emphasizing side projects that candidates themselves often undervalue.

On the business side of things, InterviewJet takes a flat fee for every hire it facilitates — $9,500 to be more precise, which Holtzman says often undercuts the finders fee usually paid to headhunters working for top firms. That rate might change in the future based on factors like candidate skill sets or when companies use the service to hire multiple engineers in one pass as an acquisition. That’s happened three times now, including an acqui-hire arranged last summer by Samsung that was facilitated entirely through the service.

Since launching its beta version, InterviewJet went through the Talent Tech Labs incubator in New York, which is dedicated to bolstering startups in the talent acquisition space. Post-incubator, the startup has raised $750,000 in seed funding from Mitchell Martin, an IT and healthcare staffing company. Holtzman says that money will go to expanding InterviewJet’s sales and product teams, increasing staff on both by half.