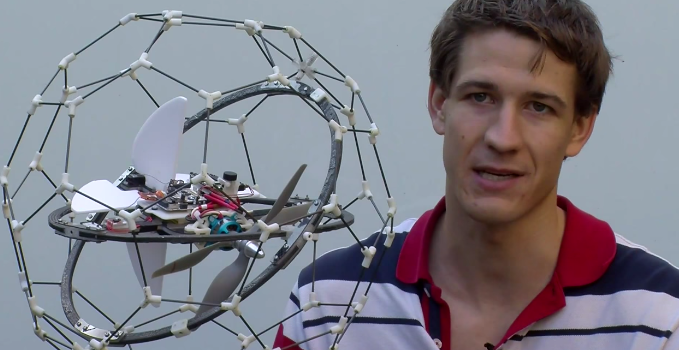 A building is on fire. There might still be people inside.

Traditionally, we’d send in a firefighter to scout — but that puts more lives at risk. There has to be a better way, right?

We could send in a robot, but the vast majority of modern robots will fail miserably the second they go up such a dastardly foe as, say, a flight of stairs.

We could send in a drone to fly about, but drones are notoriously hard to handle indoors. If any of its propellers clip a wall, it’ll go spiraling to the ground in no time flat.

Worse yet: if it clips a human, many drone propellers are plenty capable of breaking skin. Now you’re stuck in a burning building and being attacked by the thing meant to help save you.

Meet the GimBall, a damned brilliant (and I don’t use that word too often) spin on the standard drone.

Surrounding the GimBall’s drone core is a spherical cage which serves three purposes: letting it roll along the wall or ceiling, keeping the device’s propellers away from your skin, and absorbing shock to keep the device in the air.

The cage is held in place by a multi-axis gimbal system (thus the “GimBall” name), allowing the cage to rotate and roll indepedently of the propeller/camera rig at its core.

Sure, it looks like something ripped straight out of a dystopian sci-fi nightmare — like a Droideka from Star Wars mashed up with Manhack out of Half Life. But rather than hunt down rebels, this thing is meant to save lives — and between the IR camera (for seeing through smoke) and that crash resistant shell, it’s easy to imagine it doing just that in the not-too-distant future.

And it seems others would agree: Flyability, the company behind the GimBall, has just taken home a million bucks in the international Drones For Good competition, beating out 20+ other teams for the prize.

Alas, it’s still a prototype for now — while the company hopes to turn it into a commercial product within the next year or so, it’s not available just yet.