Google may be soon adding more offline and private sharing features to its Google+ Photos service. It has acquired Odysee, an iOS and Android app that let users automatically back up photos and videos taken on their cameras or tablets to their home computers. It also let users set up private, automatic sharing with other people, and it had an API for integrating the service with other apps (read our longer article about it here). The app will be shut down effective February 23, with the team behind it joining Google+ to “continue to focus on building amazing products that people love.”

The acquisition was announced via a note on Odysee’s home page, as well as through a notification being sent out to app users. In it, the startup thanks users and also notes the details of the shut-down process. Essentially, after Odysee ceases backup operations on February 23, all photos and videos already passed through the service will be available as a downloadable archive. We’re embedding the full note below.

Furthermore, we’ve found that Odysee the app is no longer available in Apple’s App Store and in Google Play; and it looks like the account for its maker, Nimbuz Inc ., has also been pulled.

We have contacted Odysee, Nimbuz Inc . and Google to see if we can get any more details about the acquisition and the decision to sell rather than remain a standalone service. It’s unclear how many users Odysee had attracted in its lifetime, or whether it had managed to attracted more investors beyond the $760k it had raised in seed money. Previous investors included Ed Han, a repeat entrepreneur, including as founder of Tiny Prints (acquired by Shutterstock) and Alex Shubat, the CEO of food tech company Goji Food Solutions, among other things.

For now you can see where the acquisition makes a lot of sense for Google.

There have been rumors swirling that Google might launch Photos as a standalone service, independent of Google+. Adding in options to save photos offline, and more features to better control how you share pictures, are logical additions that would give Google Photos service a more rounded offering, and help differentiate it more from other competing photo services. Others in the crowded space of online photo services include Facebook/Instagram, Yahoo’s Flickr, Dropbox and many more.

And even as a part of Google+, considering how wary some people are these days of giving over more data to Google’s cloud — or any other cloud-based service like Dropbox or iCloud, for that matter — it makes sense to enhance Photos with offline features for that reason, too.

Odysee, which let people log in with Facebook or by creating an account, was an app created by Nimbuz, co-founded by Raghavan Menon and Shiva Javalagi. As Sarah wrote in a profile of the app last year, both founders have a background in networking, algorithms, caching and embedded software. Menon previously co-founded chip designer Ingot Systems, which was acquired by Virage Logic (and later acquired by Synopsys).

One of the interesting things about Odysee — “especially designed for people who take a lot of videos and would like the option of saving them at their full quality” — was that it shifted the storage option to your own computer rather than any public cloud. At the same time it had developed a caching feature that let users access those pictures even if the computer was offline or working on a slow Internet connection.

Another feature that set it apart from other photo services was the apps’s approach to sharing with others. It had its own “follower and following network” that was based around the idea of adding a small group of close family and friends who would also be on the app, with the option of sharing more pictures to “non-Odysee users” by way of URL links rather than embeds.

Like other many other apps, Odysee was built around a freemium model: free for the first year, and then $5/year thereafter. The founders had at one point estimated that they could keep the business sustainable if they reached 3 million users.

Update: Google confirmed the acquisition but nothing more. “I can confirm the news and that they’re joining the Google+ team. We aren’t sharing more beyond that at this point,” a spokesperson wrote in an email.

A video of the service is below, and the farewell letter is underneath that: 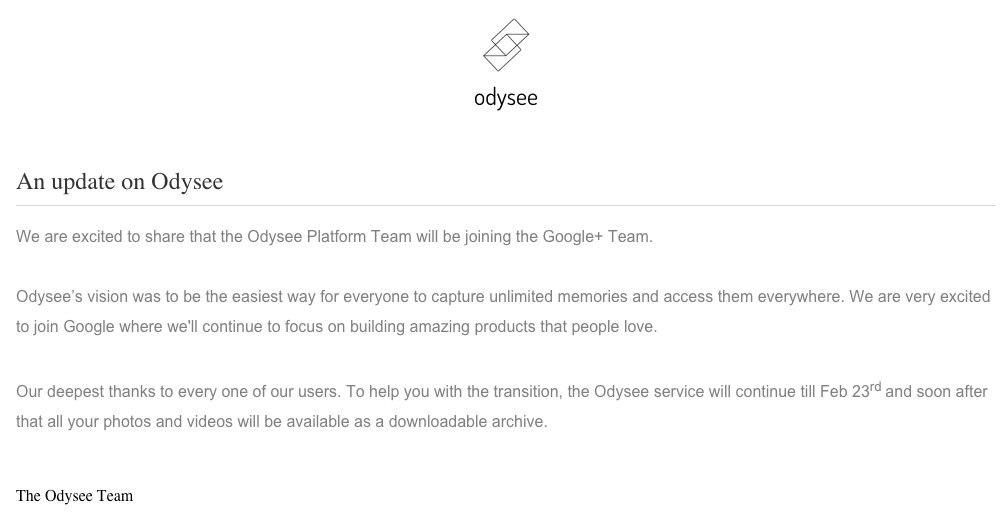