For the past couple of years, the team at Industrial Toys has been talking about building mobile games for the “core” gaming audience — the kind of player who’s more interested in shooting aliens on their Xbox than flinging Angry Birds on their iPhone. Today, the company is launching its first game, Midnight Star.

Alex Seropian is Industrial Toys’ CEO — he previously co-founded Bungie Studios, developer of the blockbuster Halo franchise. I first spoke to Seropian in March 2014, when he’d just raised a $5 million round from Accel Partners.

Looking back this week, he told me that even then, the company had “a game that was playable” and “a book that was readable” (more on that in a second). The past year has been all about building on that foundation — or, as Seropian put it, “turning every dial up to 11.”

“We were going after a certain kind of gamer on mobile, and I wanted to bring a fricking mallet to hit that nail on the head,” he said.

Midnight Star is his team’s attempt to rethink the first-person shooter for smartphones and tablets — so instead of using a joystick or game controller, you tap the screen to zoom in on enemies and fire your weapons.

While I focused on tablets when I wrote about the company last year, the game will work on smartphones too. (Today’s launch is for iOS devices.) President Tim Harris admitted that some of the initial thinking was, “Oh, we’d better develop for phones as well,” but Seropian said smartphones have gotten good enough that this no longer seems like a compromise. He’s been particularly impressed by the latest generation of iPhones, to the point where he plays the game more on his iPhone 6 than his iPad Mini.

Midnight Star offers both single-player and multi-player mode, and it’s available free-to-play — the company makes money when you buy items in the game. Seropian admitted that the free-to-play model required a shift in mindset.

“There’s just so much free content out there — one of our designers compared it to speed dating,” he said. “You’ve got like 15 seconds to make an impression. That’s just so different from making a console game, where your job is to get people to pay 50 bucks, and once they’ve paid, they’re going to stick with it.”

Seropian and Harris argued that this approach is ultimately better for gamers and developers. In this case, it meant that they had to constantly refine the game’s beginning to ensure that it was hooking players from the start.

At the same time, they emphasized that this isn’t the kind of free-to-play game that’s all about “accumulating stuff” — doing well in the game requires “real skill.” Put another way, you can’t just buy your way to victory. Seropian said that you might be able to purchase “really awesome guns,” but that doesn’t mean you’ll be able to use them well. 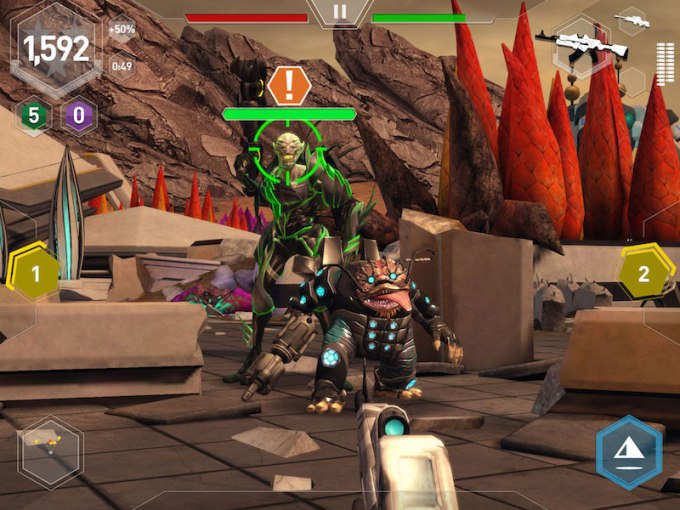 Although today is the official launch, beta versions of the game have been available for several months. From the initial testers, Seropian said he learned that the game was just “way too hard,” something the team has since adjusted for.

“We made a conscious decision not to treat this as a product, but as a constant conversation,” Harris added. And he said the conversation will continue post-launch: “If Midnight Star looks the same a year from now as it does [at launch], then we aren’t doing our job.”

In addition to the game itself, Industrial Toys has released an interactive graphic novel called Midnight Rises. It introduces you to main character, a low-ranking West Point grad on the spaceship Joplin, and it drops hints about the crew’s mysterious mission in space. Midnight Rises was written by science fiction novelist John Scalzi and drawn by comics artist Mike Choi, and while I haven’t played the game yet, I read the graphic novel as soon as it was released last week.

Midnight Rises is clearly setting the stage for the game, but it also has a self-contained plot of its own, kind like the first episode of a TV show (or the opening chapter of Scalzi’s serialized novel The Human Division). And I was impressed by how it looked on my iPad — for large stretches it reads like a regular comic book, without going crazy with the digital bells and whistles, but there are some transitions and animations that you couldn’t pull off in print, and every once in a while you’re also asked to make Choose Your Own Adventure-style choices.

Looking ahead, well, there are there are the continued refinements and additional content that Harris alluded to. As for the next game, when I asked about it, Seropian said, “You got any ideas?” (He was joking, I think.) Here’s a better clue: The company describes Midnight Star as “the first adventure in the M* universe.”