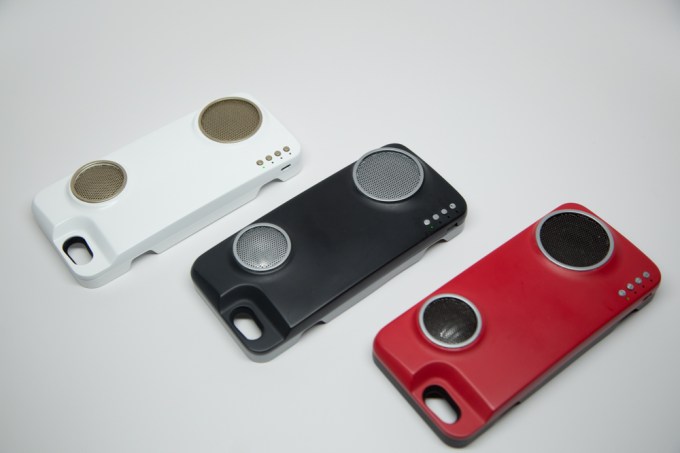 The PERI Duo is an iPhone battery case for the frequent entertainer — those who go out with friends and find that they’re the one stuck hooking their phone up to a speaker and doing some impromptu DJing.

Slightly bulkier than a Mophie, the Duo packs two powerful (for their size) speakers that can push a surprising amount of sound. While it’s not going to be the best sound you’ve ever heard (especially if you’re all about that bass), it’s certainly a better solution than putting your phone in a cup to amplify its built-in speakers. The battery can charge your phone by 170% (so fully, and then a bit more) or keep you fully charged and give you 3-4 hours of music over the speakers.

There are a few use cases where you’d want giant speakers attached directly to your phone on the go — PERI co-founder Michael Hsu suggested groups that go running together and want some jams when we met this week — but generally you want a stationary speaker pointing to the rest of the group.

That kind of sucks if you also want to use your phone while entertaining everyone else, so the Duo actually works as a Wi-Fi speaker when disconnected from your iPhone. If you use it at home a lot, you can configure it to connect to your home router and let people control it who are connected to the same network. If you take it out to the beach or a friend’s place, you can set it to generate its own local network.

If you several friends pick up Duos, you can do some neat tricks with the case’s peer-to-peer networking functions. You can set multiple speakers to play the same music, but change the volume levels on individual cases so some rooms can be for dancing and others for hanging out. You could set several up on each side of a room and send the right and left channels of music to each side. Or you could control multiple speakers in different rooms playing different songs, all from one phone.

PERI successfully funded its Indiegogo campaign and sold out of its early-bird specials, but if you’re still interested in picking one up (there’s a version for the iPhone 5/5s and one for the 6) the campaign is still going for another week. They’re going for $99 each, and Hsu says backers can expect to receive their final units towards the end of Q2 2015.