Editor’s note: Dr. Erez Podoly is an Entrepreneur in Residence with Artiman Ventures, founder and CEO of AcheroMetrics and a research associate in the Department of Structural Biology at Stanford University.

In 2014, Nike abandoned its FuelBand fitness tracker and Sergey Brin “left his Google Glass in his car.” In 2015, Apple will launch its Watch and Sony will enter the eyewear space. More kinds of wearables were introduced in CES 2015 just to leave us wondering whether what happens in Vegas stays in Vegas, physically.

Following the D-Day analogy of Moore, none of the giants mentioned above have crossed the chasm with their wearables. D-Day starts with identifying the point of attack, and there are three beachheads approaching which may lead to a successful invasion, taking us all across the chasm. 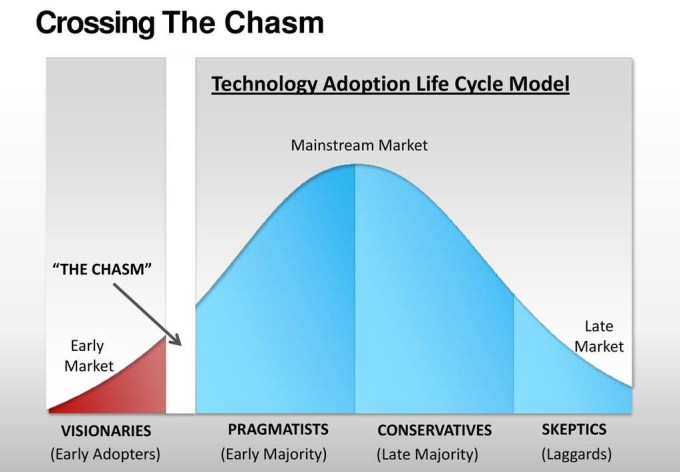 New types of wearables are slated to be launched in 2015, many of which were presented at CES: MOTA, a smart ring; Belty, a smart belt; BitBite, a smart earbud; and DUSH and HUSH, smart earplugs. Steven Holmes, VP of new devices group and GM at Intel shared in CES 2015 the most compelling new developments arising from Intel’s “make it wearable” challenge. Although it seems that this industry is thriving and prospering, what we actually have with wearables is limited penetration (10-20 percent) and high abandonment (40 percent), which fits Moore’s model precisely.

And it’s no surprise why: Fitness bands, for example, don’t work very well (see this article from The New York Times for a good rundown of their shortcomings). Smart glasses, for instance, have too many flaws and too few real applications to appeal even to open-minded and tech-savvy engineers. Other wearables violate the action-reaction principle: They supply too much information and too little insight. People are not interested in full synoptic scale meteorology, but rather they seek simple advice: “Take a coat and umbrella.”

It’s the same case with all wearables: People want a closed loop of action-reaction, simple do’s and don’ts, not the information and unprocessed measured numbers. Most wearables are still dumb-goods, rather than smartwatches, smart glasses and so forth. Right now, we’re transitioning between product generations. For this new generation of devices, wearables 2.0, potential beachheads are the market niches where people can benefit the most from simple advice and clear insights.

A handful of evidence supports the notion that wearables may take off in the workplace before other niches:

Attack the Internet of me

The Internet of me is a digital world in which the consumer is the CEO, the board and the sole shareholder. To become a part of the personalization trend, a provider has to serve the user’s specific needs in real time.

But better is to try to predict what the consumer might want next, like this newly developed smart-wristband, KipstR, which senses when the wearer has fallen asleep or wakes up again. The band then mimics a TV remote by pausing, recording or resuming the show and “rescues” sleeping sofa bears from missing their favorite show. “The Future of Awesome,” anyone?

Minority Report’s (the film) multi-touch interface (demonstrated in this TED talk by the developers) and eyeball-tracking technology are fine examples for personalization that delivers an intimate tech experience, a space that becomes crowded with more payers and a lot of handwaving, literally: Reemo plans to ship a waterproofed wristband that can control by simple hand gestures lightings, TVs, sound systems, door, windows, vents, fireplaces, thermostats, security and door locks, window shades, garage doors, and more.

Fin robotics will launch a smart-ring, which makes the user’s hand a gesture interface to activate smartphones, smart-TVs, cars, and home automation devices. Google has applied for a “Seeing with your hand” patent, and independently allowed voice-control of its smart thermostat, Nest, two nice ‘first-downs’. A touchdown will be a future hybrid of both technologies – a wearable that can automatically guide the smart thermostat to control the air conditioning system based on personal temperature sensing and person positioning.

As law requires many to wear eyeglasses or contact lenses when driving, wearing driving smart glasses in the car may cause less friction compared to restaurants and movie theaters. Currently, wearing smart glasses when driving may cost you a ticket. However, smart glasses may serve as the helmet-mounted display equivalent for vehicles: Text messages and navigation instructions, traffic alerts and car control information (alerts for fuel, air pressure, oil temperature) are some of the obvious ideas – even while studies have suggested that smart glasses might distract drivers, and specifically targeted texting as a major safety obstacle.

Well, smart glasses can become the state-of-the-art device for safe driving. They could preven you from falling asleep while driving or screen the rear view camera. Integration of Mobileye’s vision-based Advanced Driver Assistance Systems may provide warnings for collision prevention. An automotive night-vision system to increase a driver’s perception and seeing distance in darkness or poor weather conditions is another safety measure that can be embedded into the smart-glasses. Wired published an article with many more ideas.

One principle above all others should be kept in mind: “Sell dreams, not products.” When wearables execs stop measuring how long someone sleeps and start sensing what people desire, only then will wearables cross the chasm.