Virtual reality is as different from movies as movies are from novels. It’s hard to port one into another without losing a lot. New storytelling mediums need new creation tools, and Visionary VR is making them.

But this isn’t some Final Cut clone. Visionary’s editing suite lives entirely in VR. Directors use their hands to manipulate a 3D timeline, and select camera angles and cuts. Most uniquely VRographers can divide scenes into passive viewing area where the primary action occurs, and an interactive secondary zone where looking will pause the narrative so you can explore at your own pace. 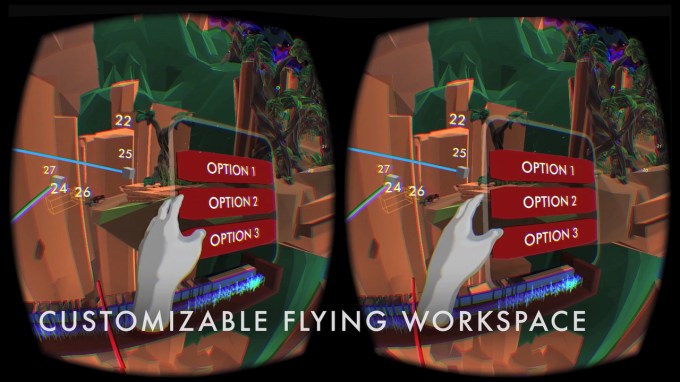 Visionary VR co-founder and CMO Cosmo Scharf explains that today, “VR experiences aren’t set in their own storytelling language.” Most of the little VR movies and demos available aren’t interactive. They’re just video clips where you can look in any direction.

The Visionary Focus editing suite gives artists the tools and framework for taking advantage of what’s special about VR: the viewer controls the perspective and the scene can react to their choices.

Here’s a primer video on how Visionary’s technology works and why it’s so important. It starts with some background on why VR necessitates new tools, but I’ve cued it to where Visionary shows how its editing suite works. Skip to 4:12 to see a demo of Visionary Focus in action:

By building the entire editing suite inside VR with two Wii nunchuk-style hand-held Razer Hydras for control, directors can seamlessly edit and watch their creations. It lets them maintain Focus. They can conjure a floating workspace and timeline, and physically grab clips to edit them or drag cameras around in an environment to set default viewing angles.

These concepts should be familiar to filmmakers, but what’s foreign (and exciting) is how Visionary Focus lets them define the frame in which the narrative takes place. Traditionally in film, that frame is all viewers are allowed to see. But in VR, viewers are free to look away from the action. That makes VR immersive, but also introduces the risk the audience will miss the action or important plot points as they curiously gaze around.

Visionary introduces the concept of partitioning a 3D world into zones, dividing the narrative frame from everything else. 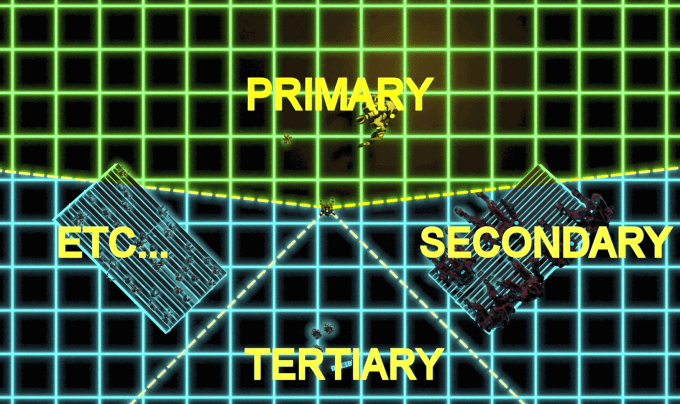 While looking at the primary zone, the narrative flows along as it would in a movie with the viewer looking from wherever the director chooses. But look away and sensory cues tell you you’re entering a secondary zone where the narrative will pause. Those cues can include a dotted line border, hazy black vignetting, a slowing of movement in the scene, and a whoosh-to-a-stop of sound like touch a vinyl record.

Once the viewer firmly crosses the threshold into a secondary zone, the viewers can use joysticks to move around and explore their environment with the narrative paused. When they’re ready to resume the action, they cross back over the border into the primary frame, and the story springs to life.

The yellow dotted border line in the demo looked a bit cheesy, but overall the effect functions intelligently to ensure viewers don’t miss anything crucial. It eliminates the need for clumsy prods like a primary frame character yelling “Over here!”, suspicious sounds coming from the center of the action, or secondary characters looking or pointing that way. 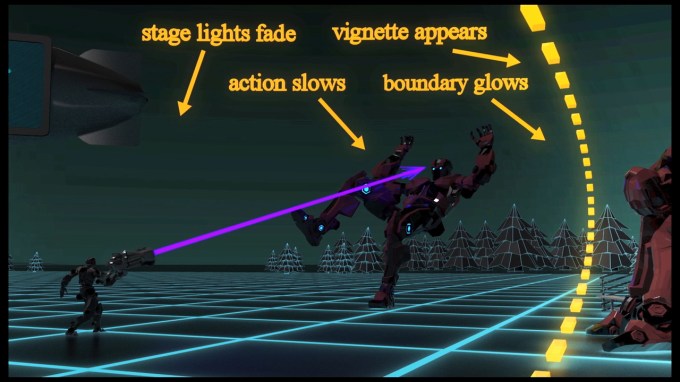 Visionary was started by VR meetup VRLA’s Cosmo Scharf, Jonnie Ross, and Adam Levin, as well as virtual reality effects makers Gil Baron and Luke Patterson. For now, the Visionary Focus system only works on graphically rendered VR experiences built on the Unity gaming engine. Eventually, the goal is to have a version that works with live footage shot with 360-degree cameras, but for now there’s no scheduled release date for the software.

Everyone in VR I talk to, from investors to technology founders to content makers, say interest in producing VR experiences is exploding, especially amongst filmmakers. 11 of the 14 works in Sundance Film Festival’s experimental New Frontiers program feature virtual reality. The problem is most directors aren’t sure how to conceptualize or actually build experiences that aren’t simply movies in 360.

Visionary VR could teach filmmakers how to create VRart, not just VR.