In Japan, where iPhones have been the top handset by market share since the fourth-quarter of 2012, Apple accounted for 51 percent of all smartphone sales in October and November. 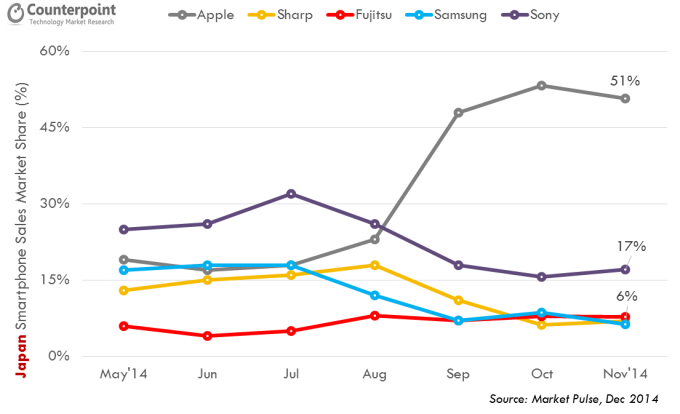 Samsung still dominates in its home market of Korea, but Apple took more than 30 percent of total smartphone sales there in November. Counterpoint Research says this marks the first time it has posed a real challenge to the chaebol’s market share because the iPhone 6 Plus finally gave phablet fans an iOS option. 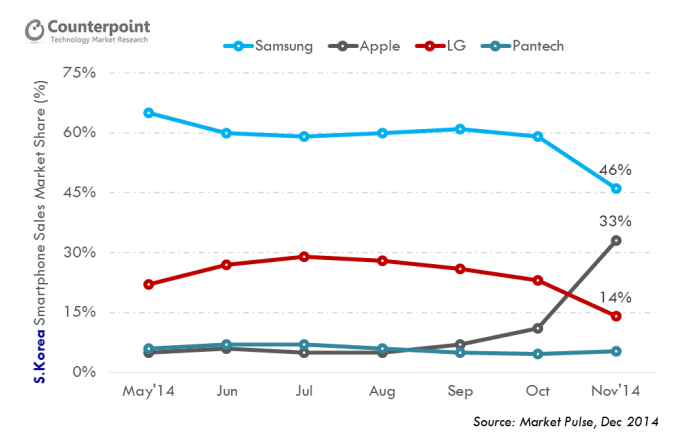 “No foreign brand has gone beyond the 20 percent market share in the history of Korea’s smartphone industry. It has always been dominated by the global smartphone leader, Samsung. But iPhone 6 and 6 Plus have made a difference here, denting the competition’s phablet sales,” wrote Tom Kang, Counterpoint’s research director based in Korea.

He added that Apple could have sold even more phones, but there weren’t enough iPhone 6 and 6 Plus 64GB and 128GB devices available to meet demand.

The iPhone 6 Plus also helped iPhone sales in China increase by 45 percent year-over-year in November. Though China is Apple’s most important growth market, its dominance there has been challenged by the rapid increase of inexpensive Android smartphones made by fast-growing competitors like Xiaomi.

Furthermore, iPhone sales in China dipped at the beginning of fall thanks to a combination of regulatory and inventory issues.

They began to recover in November, however, and iPhone sales that month pushed Apple’s market share to above 12 percent, putting it behind Xiaomi and Lenovo, the number one and two smartphone vendors in China, and taking further market share away from Samsung, which was once at the lead but has been struggling with slowing mobile sales.

“Apple with iPhone 6 and 6 Plus have been able to impact Samsung’s premium Galaxy S5 and Note 4 sales. But with the launch of Xiaomi and Note Pro it is going to be a fierce battle in the premium segment, with Samsung being attacked from both ends,” wrote Counterpoint research director Neil Shah.