A new application called Workestra for iOS, Android and Windows Phone turns your push notifications from various apps and services into tasks you can “snooze” or mark as done. The idea is to offer a more inbox-like tool for managing the various updates from your apps, allowing you to better control which sorts of notifications you want to see, and which accounts you want to see them from, among other things.

According to Workestra founder Omid Borjian, one of the bigger advantages to using this service is its support for multiple accounts, and the control it offers over those accounts’ updates.

For instance, if you’re managing multiple social media accounts for your organization or clients, you often have to log in and out of your different accounts in each app in order to see all the updates. 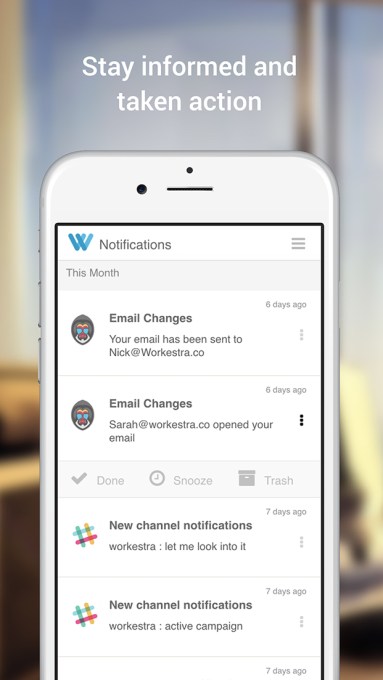 In addition, when you tap on the push notification sent to your phone to view the update, the notification itself disappears. Workestra instead lets you keep track of these notifications in a more centralized, organized fashion where you can also control what type of notifications appear in the first place.

Longer-term, Workestra’s larger goal is to support enterprise apps and services that may not even be available in a native mobile format, or don’t offer their own APIs.

“A lot of companies have all these apps out there that no one wants to log into,” explains Borjian. “And we’re already bogged down with all these apps we have on our phones. So you get all these notifications, and it’s very hard to control it nowadays because you get notifications about things you don’t even care about.”

This problem led him to thinking about a different way to manage notifications.

With Workestra, users can currently choose from around 50 different “channels,” (think: Instagram, Twitter, Slack, Facebook, MailChimp, Salesforce, etc.) as well as which type of notifications they want to see from that channel. These are then sent to the Workestra app, where they can be treated as tasks you mark done or save for later. 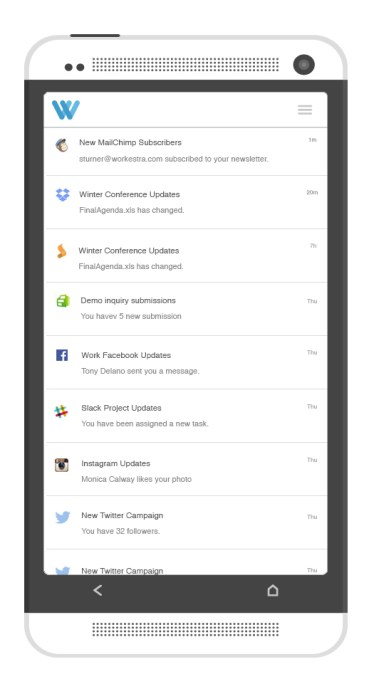 You can also turn your notifications off entirely, as needed – like if you’re determined not to work during your vacation, for example.

Plus, through the Workestra API, developers can send anything to Workestra, including updates from services that weren’t designed for the cloud, or for mobile platforms. Currently, developers can choose from Java, Python, PHP, Ruby, Node.js and .Net third-party libraries to make this integration possible.

The app is mainly targeted at business users, and, in a future release, will support the ability for I.T. to manage the notifications for a group or groups of people. That will also be useful for businesses where they maintain a third-party account (e.g. Twitter, LinkedIn) without giving passwords to the entire team, but still want team members to know when the account has received an update.

Also soon, users will also be about to perform actions related to the specific type of notification they receive directly in the Workestra app, as well.

Borjian, who currently works as a UX/interaction designer with cloud company ServiceNow, has been bootstrapping Workestra on the side since last March. To date, the app has been in private beta testing with just 100 users so far since it first launched on Android a month and a half ago. Today, the app is also supported on iOS, Windows Phone and the web.

Now the plan is to make the app available to the public within a week’s time. Interested users can sign up here for an invite. 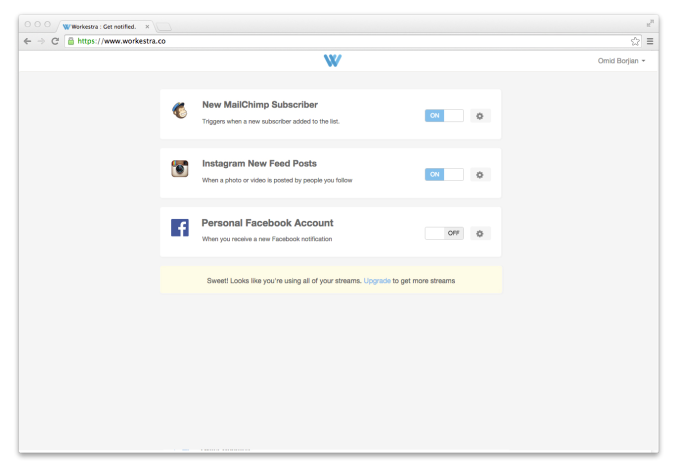