Aoliday, a Shanghai-based travel site and mobile app that helps Chinese tourists arrange oversea trips, has raised $1.5 million in seed funding from Gobi Partners. This is Aoliday’s first round of investment and will be used to hire more employees, improve its offline services, and expand into new markets, founder and CEO James He (pictured above) told TechCrunch.

Aoliday (a romanized version of the company’s Chinese name that is pronounced “ao-li-day” and unrelated to TechCrunch’s parent company AOL, in case you were wondering) opened its China office in June 2013, but began operating in Australia three years earlier. During a stint working Down Under, He launched a travel forum for Chinese tourists interested in traveling to Australia. The site grew and He eventually decided to turn it into an e-commerce business. Aoliday is now the only partner of Tourism Australia, a government organization, in mainland China.

Along with its rivals, Aoliday is tapping into the rapid growth of China’s outbound tourism industry. In 2013, Chinese tourists spent a total of $129 billion, the most out of all countries. The number of trips taken is expected to double by 2020, reports The Economist.

According to He, the increase in travel is driven by a growing middle class, less restrictive visa policies for Chinese tourists (including the U.S.-China joint 10-year visa policy announced at last fall’s APEC), the growing number of air routes from China to overseas destinations, and regulations designed to improve the quality of travel services to protect consumers. 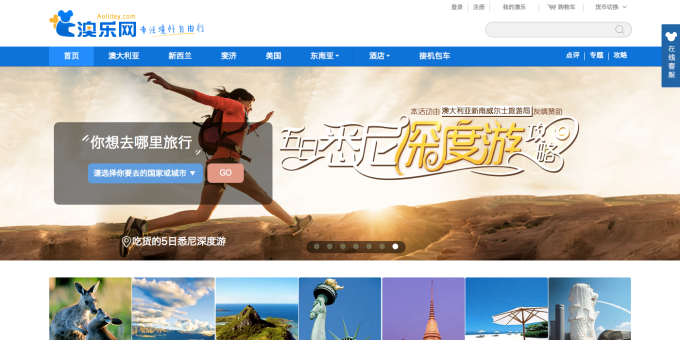 Aoliday’s direct competitors include Toursforfun.com, Woqu, and Haiwan, but Aoliday seeks to stand apart by focusing on offline services, including airport pickup at destinations; sourcing and developing its own packages to allow the company to retain more control over quality and margins; and taking an “a la carte” approach that lets customers customize an itinerary instead of just ordering a traditional tour package, which appeals to younger travelers.

Tourists can book hotels, tickets, tours, and transportation through the site, which includes destinations in Australia, Fiji, New Zealand, Southeast Asia, and the U.S. Aoliday currently offers 3,000 independent tour packages, which it plans to increase to 10,000 by the end of this year. The company claims that it has been profitable since it was first founded.

He says that in 2014, over 30,000 tourists purchased Aoliday products, more than four times than the site’s 2013 total, and generated “several million” dollars in revenue.

Aoliday is the latest in several Chinese travel startups Gobi Partners has invested in. Other companies in its portfolio include Spottly, Tuniu (which held its initial public offering on Nasdaq last May), and Yododo.

In a statement, Gobi Partners managing partner Thomas G. Tsao said “In recent years, Chinese outbound tourism has shown remarkable growth. With this, independent travel offerings are increasingly in demand as more travelers break away from traditional tour groups. We believe Aoliday is well-positioned to capitalize on this shift in consumer habits and we look forward to their continued success moving forward.”