“In five years, the notion of a drone crashing will be a weird, foreign thing” says Adam Bry, co-founder of drone auto-pilot startup Skydio and founding member of Google’s Project Wing drone delivery project. Skydio connects a drone’s cameras to its flight computer so it can avoid obstacles and maneuver on its own without GPS.

Today Skydio announced it’s raised a $3 million seed round led by Andreessen Horowitz and joined by Accel Partners to start assembling custom hardware and move toward getting its technology to market.

To demo its auto-pilot system, it’s built a drone “magic wand” that lets you direct a drone by simply pointing your phone where you want it go. That means you don’t need the traditional, clunky dual joystick drone controller. Here’s a quick demo video of Skydio’s drone magic wand in action:

“I grew up flying radio controlled airplanes” Bry, Skydio’s CEO, tells me on a sunny day out on San Francisco’s waterside Embarcadero. “I took it too seriously and won a couple of national championships in high school. Not the most popular hobby as a teenager.”

But Bry nerding out in the skies brought the team together. It delivered him to MIT’s computer science and artificial intelligence where he met future Skydio CTO Abe Bachrach.

The startup’s CXO Matt Donahoe was more into film and gaming, but recalls working at MIT’s media lab when he became fascinated by Bry whirling drones around outside. “I said ‘putting a camera on a drone is going to be really powerful'” Donahoe tells me. “Putting cameras on tripods is a pain. I think drones are going to be the most incredible creative tools we’ve seen in a long time.” 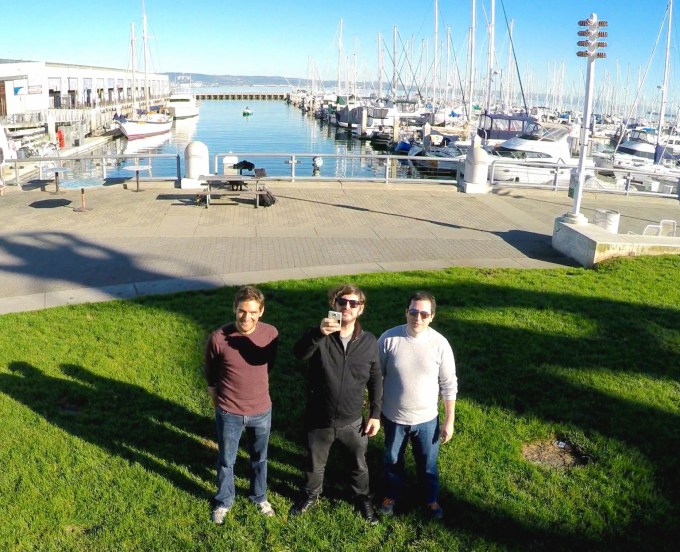 Bry’s Master’s thesis was a fixed-wing drone that could fly 25mph around a tight parking garage (video below), and this GPS-denied flight technology would become the basis of Skydio. Him and Bachrach stayed in touch with Donahoe as he worked at gaming startups while they founded Project Wing at Google[x]. Building drones that could deliver disaster relief supplies primed Bry and Bachrach to strike out on their own and form Skydio.

Dual joystick drone controllers today are like the Command Prompt interfaces for old computers: you have to be an expert to get any value out of them, limiting their accessibility. Yet CES this year proved that drones are going mainstream. The Skydio team wanted to build a way for anyone to fly drones, and that means taking responsibility for maneuvering off the user and putting it on the propellered-shoulders of the drones themselves.

Most unmanned aerial vehicles need GPS to know where they are. That can lead to some hilarious malfunctions, like when a bug resets a drone’s intended location to 0° latitude, 0° longitude, sending it hurdling towards Africa. The reliance on GPS seems silly, though, considering drones are now equipped with high-grade video cameras.

So Skydio set out to forge a “drone visual cortex” that takes the feed from the cameras and runs it through their computer vision algorithms that detect placement or obstacles in 2D and converts the image to a 3D map of the drone’s surroundings. This map and navigation instructions are then passed to the drone’s flight computer.

At a basic level, this keeps drones from crashing. They can see a nearby tree or the ground, and know not to run into them even if a human tells them to. But Bry says it’s the ability to unlock new interface options that really gets him excited about Skydio. They can replace the Command Prompt with a Graphic User Interface. 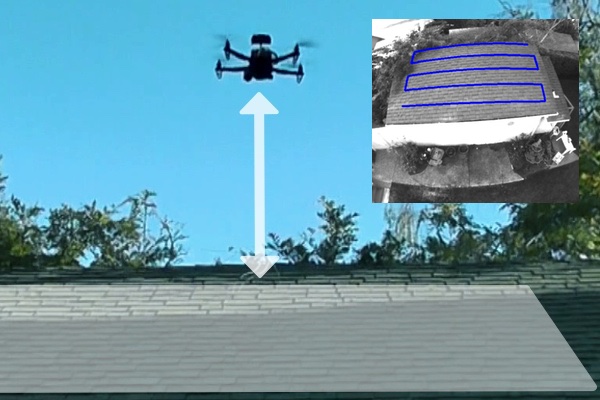 One example is the magic wand. A second is an auto-follow program that lets the drone pilot itself while keeping you in its camera frame. You could simply mark a location on your phone and have the drone do a reconnaissance run, automatically planning a route that will capture every inch of the target zone on camera as shown in the image above. Or you could line up a drone camera angle by watching on your phone screen, swiping or pinching to adjust the perspective as the drone maneuvers to get your desired shot.

Here’s a demo reel of what Skydio-equipped drones can do:

Skydio is still in the prototype phase, hacking together off-the-shelf materials. The new $3 million from Andreessen Horowitz, Accel, and a squad of secret angels will fund the purchase of custom hardware for Skydio’s visual cortex, plus hiring computer vision geniuses. After a year, the company is still just the three founders.

“We’re not going to make the whole drone” says Bry. But the team does need to build more computational power into drones so they can do the computer vision processing locally rather than sending it somewhere else. Still, Donahoe jokes “We’re much closer physically to cloud computing.”

Eventually, Skydio expects to partner with drone manufacturers to get its technology in the air. It could work with fellow Andreessen-backed startup Airware, which makes a drone operating system and flight computer that can be programmed for commercial missions. Bry admits top drone makers like DJI and Parrot could get more serious about computer vision auto-pilot. But the bigger threat is beating science to make the technology work.

Skydio doesn’t have a concrete release date for its system, but is pushing to get software out the door this year. Drones are still widely banned from commercial use by the FAA but new regulations could soon give them limited airspace. Silicon Valley’s investors clearly want to be waiting in the wings.

Donahoe concludes “Between drones and VR, the future’s definitely going to be sweet.”