Apps like Flipboard, SmartNews, Nuzzel and a rush of others have tapped into the rise of social networking to offer a new way of discovering things to read and see online. Now add another app to the mix called Starlike that’s taking this idea to a new level. 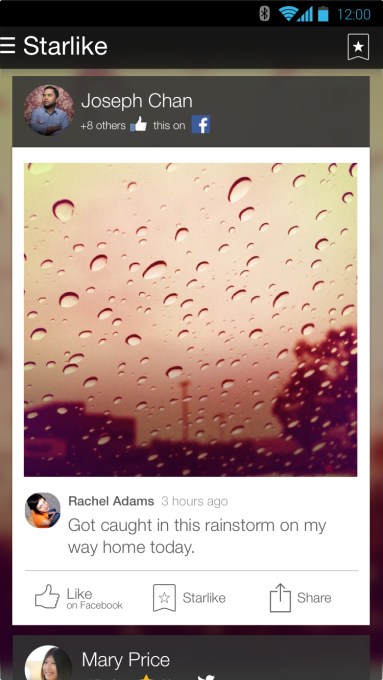 Like the others, Starlike (out on iOS and Android) creates a social newsfeed of a sort based on our friends’ and contacts’ social activity. But instead of news or other links shared by them, it’s based around what people star/favorite on Twitter, or like on Facebook and LinkedIn (hence the eponymous name “Starlike”). Yes, that faved item could be a news story, but it could also just as easily be a funny joke someone made, or a photo someone took.

Starlike is the latest app to come out of Aol’s Alpha — a new, independent (ie no tie to promoting any other Aol product) app studio of 20 people run by Ryan Block and Peter Rojas to develop “low stakes experiments,” in the words of Rojas.

With Alpha, Aol is making the most of the entrepreneurial talent it has to see if it can build something new: this is the same duo that founded and/or ran not one but two blogs bought by Aol, which also owns TechCrunch. It is Alpha’s second app. The first was a messaging app called Pip, launched in December 2014.

Ironically, some of the early inspiration for Starlike came from when Rojas was leading strategy for the Brand Group at Aol. “A lot of people there were saying we should build a news reader app,” he recalls. (No, not this one. And not this one, either. Something else.) “I thought that besides that having been done to death, it didn’t feel like that interesting of an idea. There are a lot of good solutions out there for a personalised news experience so I thought of the white spaces.”

The premise of Starlike is an interesting one. Facebook and Twitter introduced their thumbs-up and star buttons as an easy way to encourage engagement with content from people who may not be inspired or interested enough to produce some of their own.

Faves and likes are somewhat static and hidden, though: generally the only people who can see what you’ve liked has been the recipient of it. In effect, what Starlike is trying to do is to turn those little, distant blinks into bigger, flashing lights.

“I was surprised by how much cool stuff you could surface just by looking at what your friends were faving,” Rojas tells me. “It’s a bit like having a curated version of Twitter where you’re seeing just what your friends think is interesting.” 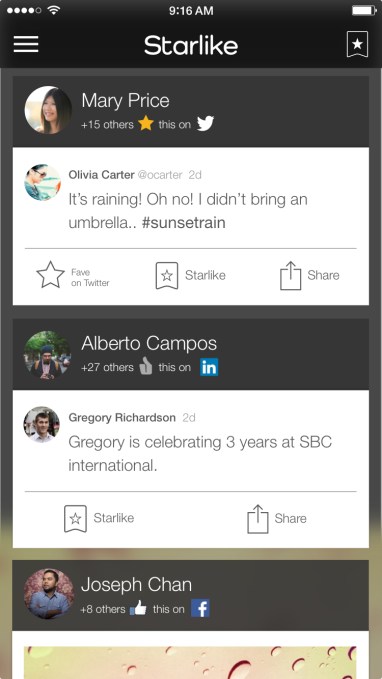 Rojas tells me that Alpha chose those three social networks in part because they’ve been some of the most popular for people favoriting content, but also because their APIs allow for aggregating the actions (while Instagram is another obvious addition, there is no API available yet to extract people’s endorsing hearts).

Also, they have been slow to covert those actions into something more interesting, and the user experience for reading on them is not always great. “LinkedIn can be very difficult to use, and so we’re offering a format that is much easier to read,” he says.

And so far the platforms have been playing nice. “We worked with Twitter for elevated access,” he says. He is also today flying across the U.S. to meet with Twitter to keep the conversation going. “It’s still working to make it a better experience. They’ve been a great partner for us and very supportive.”

That’s for now, at least. Twitter has been running some experiments of its own trying to extend the half-life of its starred Tweets, but some of those have backfired pretty badly, so it’s no surprise that for now it doesn’t mind handing that that kind of work over to someone else, in a separate experience. But just as it has made moves to keep the Twitter experience on Twitter for other aspects of the service, it may choose to reign in faves eventually too.

Nevertheless, for now those likes and stars are free for anyone to catch, and that’s where Starlike is jumping in.

For now, the project is pretty early in its conception. No ability to edit or tailor your feeds to focus on specific subjects, only the option to fully mute those who are extra keen on faving and liking content. There is a bookmarking feature to save content for later, and the ability to fave content from within the app to then show up on the other networks. But there is no monetization of any kind, including no ads while Alpha focuses solely “on seeing if this is something people will use.”

And indeed, the Alpha folks know that it’s tough out there in the apps world, and it may not turn out to be used.

In that sense, they are following on in what seems like current trend, of studios creating several different apps at once and watching to see which of them works, and which do not, focusing on the positives and moving forward. (Another two studios with a similar ethos are Kevin Rose’s North and Garrett Camp’s Expa. Rose has now left Google Ventures to focus on North full time, and it has just raised $5 million to continue its efforts.)

And Alpha plans to do the same. So far, Pip — a Yo-like app that lets you quickly send contacts pre-made phrases — is a go-er.

“We’re looking at releasing the next version already, with changes made in response to user feedback,” he says. No word on numbers for Pip except that it’s seen “great reception and we’re happy.” But they know that won’t always be the case. “I’m not sure we have hard and fast rules on iterations on a product before we decide to sunset or shut it down. We’re trying not to have a rigid playbook. It’s a product methodology that makes sense for this space. App stores are a hit-driven business, and it’s hard to know what will be the most successful app.”