Terrorists tried to silence the voices of people with different opinions in the Charlie Hebdo attack, and that’s why Facebook CEO Mark Zuckerberg spoke out against these terrorists and not others elsewhere in the world. At a public Q&A today, Zuckerberg explained his perspective on Facebook’s quest to give people a voice, and why it’s the company’s mission, not business, that drives it to continue operating in countries that restrict free speech.

This is Zuck’s third monthly public Q&A, and his first away from Facebook’s headquarters in Menlo Park, California. Previous sessions addressed the forced migration to Messenger to increase chat speed, how competition for feed space is decreasing organic reach for Pages, and why Facebook wants more nuanced expression but won’t build a dislike button. 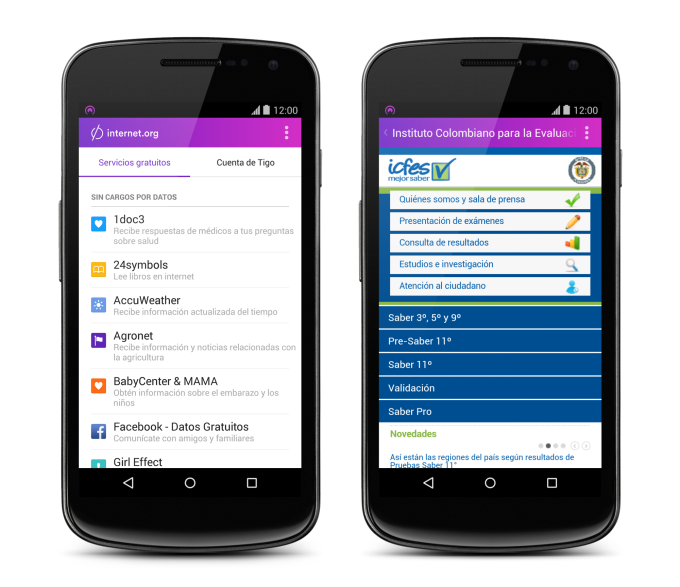 Zuckerberg was in Bogota, Colombia today to meet with President Juan Manuel Santos and telecom minister Diego Molano. Their discussion coincides with the release of Facebook’s Internet.org app in Colombia.

Powered by a partnership with local telecom Tigo, the app gives residents free data access to a variety of services including Facebook, Messenger, health information, and government resources. Until now, only 50% of Colombians had Internet access. The app was previously released in Kenya, Zambia, and Tanzania, and is part of a Facebook’s partnership with big telecoms to get everyone in the world connected to the Internet.

Zuckerberg started the Q&A by repeating some old statements he made. He explained how Facebook is using Internet.org to give away free access to the Internet, and demonstrate to people why they would want to be on the web.

Then when asked if Facebook could add a “mark as read” button to feed people don’t see the same posts multiple times. He responded that sometimes you’ll see a post from a friend, but then there will be a new comment and Facebook will bump it up in the feed again. There is a Hide button on every post in the News Feed if you don’t want to see certain posts. He then recounted how added competition for limited space in the feed means Facebook can’t show everything.

Later in the talk, Zuckerberg said that smart eyewear could be one of the next big computing platforms. Throwing shade on Google Glass, he said, “The future of tech could be glasses…that don’t look weird like the ones we have today”.

But the meat of the talk was about freedom of speech.

The CEO was asked why he didn’t speak out against other terrorist attacks, like those in Africa, but did condemn the attack on Charlie Hebdo, in the post shown below: 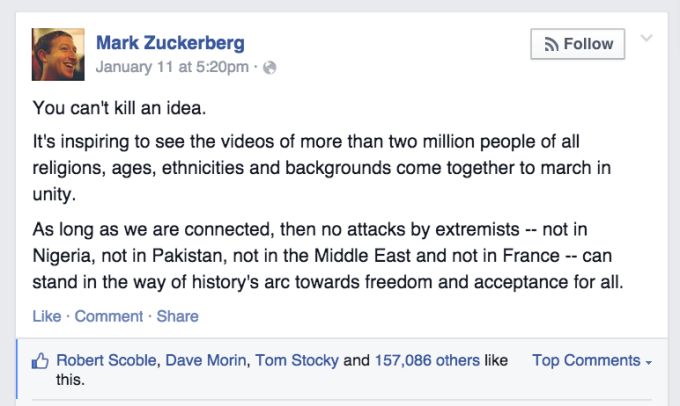 All of these terrorist attacks are terrible. We really need to do whatever we can to prevent them. There are certain topics that I speak about, mostly that are related to Facebook’s efforts, like connecting everyone and giving everyone a voice. That’s why I thought the attacks in France were important for me to speak about. This was specifically about people’s freedom of expression.

This attack was to silence people who had offended someone else. There are a lot of different things that can stand in the way of you having a voice. A government can create a law blocking free speech. You might not have the tools like the Internet to share your voice. But if you live in fear that you’re going to get hurt because some extremist might not like what you say and might kill you, that’s not freedom of expression.

We stand up and try to let people have as much of a voice as possible. This was an event where I thought people didn’t just need to stand up against terrorism, but to stand up for everyone having a voice and the ability to share as many things as possible. But that doesn’t mean I don’t care about the other terrorist attacks.

The next question followed up with why Facebook continues to operate in countries that have laws restrict freedom of speech, including on Facebook, and whether he thinks Facebook should break these laws. For example, at times Facebook has had to screen content to filter out anti-government sentiment in India and Turkey. 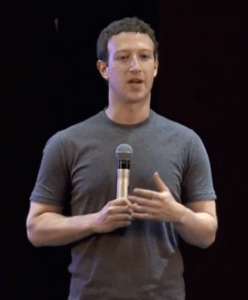 This gets to the heart of our mission. We want to help connect everyone and give people a voice. A government passing a law that you can’t say something is one barrier against people having a voice.

We try to push back whenever we get requests to block something. We review every request to make sure it’s within the law.

I can’t think of many examples in history when a company not shutting down in the face of a law and getting banned helped change that law. But continuing to operate can help the country in other ways, such as allowing people to connect with loved ones, learn, and find jobs. So I think overwhelmingly our responsibility is to continue operating.

Some people say that we do this because it’s good for our business, but there are several countries we’re not operating in and we’re doing just fine financially. If we got blocked in a few more countries, it wouldn’t matter that much. This is about our mission, not some short-term business decision. I believe we’re best serving the world by continuing to push for as much expression as possible.”

Essentially, Zuckerberg believes that Facebook’s benefit to a society outweighs the moral objection to complying with laws that restrict free speech. They could pull out entirely or flaunt restrictions and get banned in restrictive countries, but that would just further silence the voices of citizens. The hope is that through access to human connection, discussion, and education on Facebook, a nation’s people will be able to change their society to be more free.