Non-profit digital rights organization EFF rolled out a new mobile application this morning, which allows users to more easily access the group’s “action center” from their smartphone. However, the new app is only being made available to Android users, the EFF explains, because the group has issues with Apple’s Developer Agreement. The EFF says it could not agree to its terms, which it calls “outrageous” and “bad for developers and users alike.”

The organization is known for taking a hard line on matters related to digital privacy, free speech, fighting online surveillance, and supporting free and open software and technologies. It’s not, then, all that surprising that it wants to push back against the more restrictive terms that go along with being an Apple iOS developer submitting an application to the iTunes App Store.

Apple, of course, has the right as a private company to manage its store as it sees fit, and some of the terms the EFF rages against are focused on protecting its investment in its mobile app ecosystem – for example, its rule that apps using Apple’s SDK can’t be distributed in other app stores. Meanwhile, other rules – like the one  that says Apple can kill an app at any time – are focused on protecting users against security threats.

Specifically, the EFF took issue with Apple’s reported “kill switch” for apps, which is something that makes sense to have as a protection in the event that an app that’s able to serve up malicious code or malware was accidentally allowed into the App Store and downloaded to users’ phones and tablets. Apple doesn’t use that switch to just arbitrarily pull apps off devices.

Said Steve Jobs of the switch, “Hopefully we never have to pull that lever, but we would be irresponsible not to have a lever like that to pull.”

Other terms the EFF worried about included Apple’s ban on public statements about the Developer Agreement, its ban on reverse engineering the SDK or iOS, and its ban on jailbreaking. Apple also says that it has to approve an app’s bug fixes or security releases, which the EFF describes as Apple “owning your security.”

“If Apple does not approve such updates very quickly, this requirement could put many people in jeopardy,” the EFF writes. On this point, the EFF could make more headway – for users’ safety, there should be a better way to speed through critical security patches without having to go through the usual review process. (Apple lets developers request an expedited review, but Apple does not have to approve that request. And while it’s faster, it’s not fast.)

In addition, the EFF says that it would be required to include a form of DRM (Digital Rights Management) on its app, which is something it vehemently opposes. 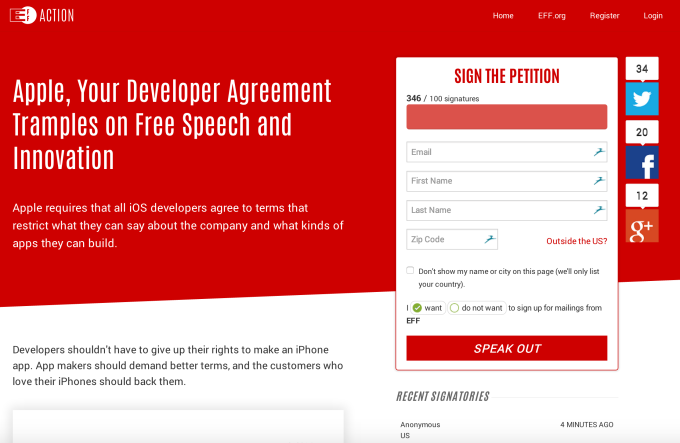 The EFF didn’t build a native iOS version of its app, and it doesn’t appear to have submitted one to the App Store, as this complaint indicates. (It couldn’t have, because that would require it agreeing to the terms. The organization built a cross-platform app using Cordova and Ionic, but wouldn’t be able to integrate the SDK without agreeing to Apple’s terms.)

Instead, the organization is using the launch of its Android app as an opportunity to drive up support for a petition asking Apple to revisit its App Store terms.

This petition states that: “Developers shouldn’t have to give up their rights to make an iPhone app. App makers should demand better terms, and the customers who love their iPhones should back them.”

While some may disagree with the EFF’s somewhat black-and-white stance when it comes to the openness, or lack thereof, in today’s mobile application marketplaces, it’s important that the organization exists and that it continually raises questions for the industry to consider. Even if Apple never capitulates to any of the EFF’s demands here – and it’s not likely it will – the group’s awareness-raising efforts may at least give a corporation like Apple something to think about. For instance, giving developers a faster App Store review queue for pushing out critical bug fixes and security updates would be a welcome change on both developers’ and users’ parts. While it’s doubtful that Apple would ever just allow app developers to publish directly, it could make improvements in this area.

The EFF could serve the needs of iOS users with an HTML5 version of its new app, but apparently, it did not. (Or at the very least, it’s not touting that in its announcement, even if the website act.eff.org is mobile-optimized.)

In the meantime, Android users can download the EFF mobile app now. The app itself is pretty basic – it notifies you via push notifications to respond to the EFF’s various calls to action, which you can do by tweeting, calling, emailing and more. But there’s not much to the app, really – it seems it was created more so to be a pawn in the EFF’s battle with Apple than something that thoughtfully addresses the needs of mobile users.

“We’ve been working on revamping our online activism tools for the last year (well, frankly, longer) and the mobile app is part of that process. It’s actually a pretty enormous undertaking, rebuilding everything from the ground up including mapping every Congressional contact form — https://www.eff.org/deeplinks/2014/04/tech-volunteers-eff-needs-your-help
– and moving to a free software activism platform. Our next step is internationalizing the entire action center, so it’s a useful tool for people outside of the US.”