CES kind of feels like my own personal hell, in that it takes the coolest technology in the world and surrounds it with marketing gimmickry. I noticed this the most in the way companies were pitching their TVs, which you can’t help but look at because they’re all at eye-level and bursting with color.

The UHD stands for ultra high definition, which isn’t too bad. With the right footage (more on that in a bit), these TVs can look way better than what you see on a typical screen at Best Buy.

But what the heck does the “S” stand for? According to signage throughout CES, “Seductive.” Which, at first glance, doesn’t seem that far-fetched: after all, these things draw your attention. They’re alluring.

But, in the context of the show, it’s hard not to read it as something a bit sadder. Between the James Dean-like silhouette on the poster as you walk into the central hall and the footage of beautiful women on TVs in Samsung’s area, the impression the campaign gives off is: “Hey, you’re a nerd. You have trouble picking up women, right? Buy this TV, and women will be seduced by the blacker blacks and color reproduction in your living room.”

Maybe I’m reading too into it, and it’s just lame. But Samsung wasn’t the only booth to use loops of beautiful women in unnatural poses to show off how nice their 4K TVs are: in fact, one Haier station *only* had videos of women on the screens, with no other signage. Yeah, this is how me market tech to consumers in 2015! 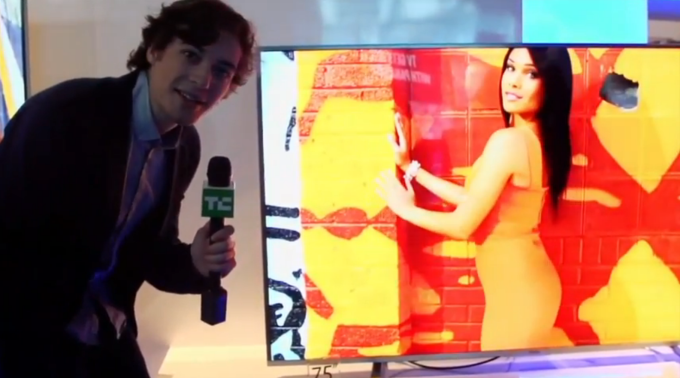 Other brands had footage that looked like soap operas at 4K resolution. Your one shot to put your product in the best light possible, and you don’t get the settings *exactly* right for the show floor? Fired.

The crème de la crème of the experience was the massive 4K-3D wall. Apparently someone actually thought, “Maybe if we take these two pointless, unwanted things and mash them together, people will love them!”