At its CES keynote today, Ford announced its Smart Mobility initiative, a set of 25 experiments ranging from big data analytics to a car swap service that let you swap your Mustang in for a minivan for the weekend. The company also talked about its plans for autonomous cars.

Ford CEO Mark Fields noted four trends for the auto industry’s future: Increasing urbanization, and its constituent clogging of roads; a growing global middle class; air quality, or what you could call a lack thereof in many parts of the world; and finally, changing consumer sentiment, with shifts in the global economy seeing youths, for example, have different buying patterns than their parents. 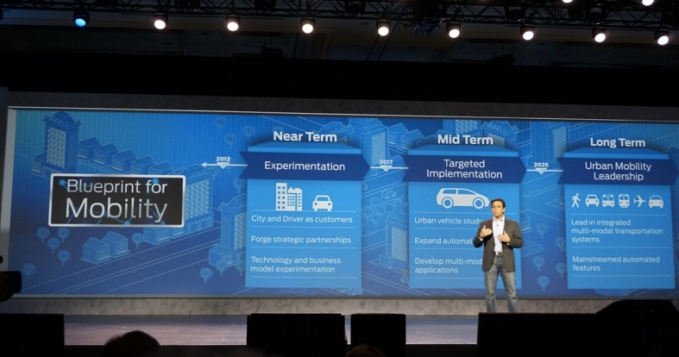 Ford CTO Raj Nair also talked about Ford’s initiatives around autonomous and assisted driving. The key enablers for this, he believes, are smart software development and improved sensor capabilities in cars. As Nair noted at a press dinner ahead of the keynote, he believes we will see autonomous vehicles on the road in at least some clearly defined locations within five years. He has no doubts that Ford will also offer an autonomous car in the future and the company already has prototypes of its autonomous cars on the road right now.

But the car industry still faces numerous challenges — not just technological ones, but also cultural ones. Ford, for example, is also thinking about what that experience will look like. Will there still be a place for a performance car, for example? Or how do you keep drivers from getting car sick when they essentially become passengers? And how do you keep those ‘drivers’ from becoming complacent so they don’t miss their queue when they suddenly have to take the steering wheel again? The path, however, isn’t an all or nothing according to Ford, but will instead be achieved via increasing “semi-autonomous” features. The company also claimed that “vehicle-to-vehicle” communication is not a required component of car autonomy, a claim that some will certainly dispute.

Ford received applause for promising to respect user data, and focus on opt-in options for consumers. With one of the experiments, Big Data Drive, Ford is working on is a big data experiment in Detroit. Per hour, these cars can collect up to 25 gigabytes of data.

Fields asked, “What if you owned a database of all your driving experience since you got your driving license?” Another one of Ford’s experiments is offering just that from a fleet of cars in London to see how, for example, you can use this data to lower insurance rates. 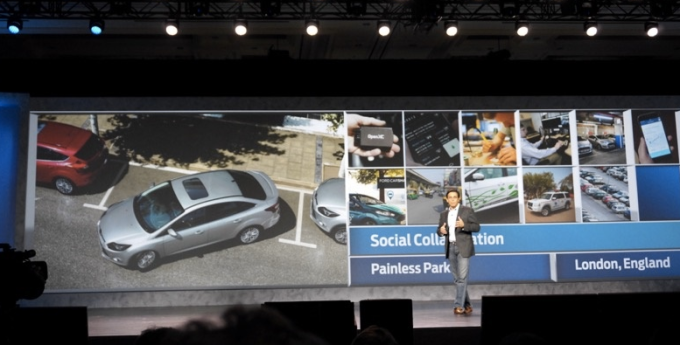 Other experiments in the Smart Mobility initiative focus on car sharing in London, an Uber-like mini-bus service in New York, and a car-swapping service in Dearborn, MI. Using sensors and GPS data, Ford is also working on mapping and its using those same sensors to look for open parking spaces so it can share this data with others.

Interestingly, Ford is also looking at how it can use its OpenXC platform for other forms of transportation, including cycling and, as a Ford representative told me yesterday, the company has even looked at how it can bring this technology to boats.

For recently saw its December auto sales rise at a far slower pace than its rivals, only notching a 1.2 percent increase in the month. The company’s shares have slid thus far in 2015, leaving it with a market cap of just over $56 billion.