According to a year-end report put out by the now Yahoo-owned mobile analytics firm Flurry, mobile app usage continued to see significant growth over the past year, with overall app usage up by 76% in 2014. Top app categories including Shopping, Utilities & Productivity, and Messaging also saw triple-digit growth in the past year, and contributed greatly to the overall increased usage of apps. Notably, growth in the Games category continues, but has slowed, along with slowing growth in Music, Media, and Entertainment categories.

To clarify: Flurry defines “app usage” as a user opening an app and then recording a session in the app – meaning the user actually engaged with the app for some period of time.

Every app store category saw session growth in 2014, but growth within the Shopping category was the largest. On iOS and Android, sessions in Shopping apps increased by 174% in 2014, while on Android alone, sessions were up by 220%, the report finds. Says Flurry, “if 2013 was the year messaging apps took off, 2014 was the year retail came to mobile in a big way.” 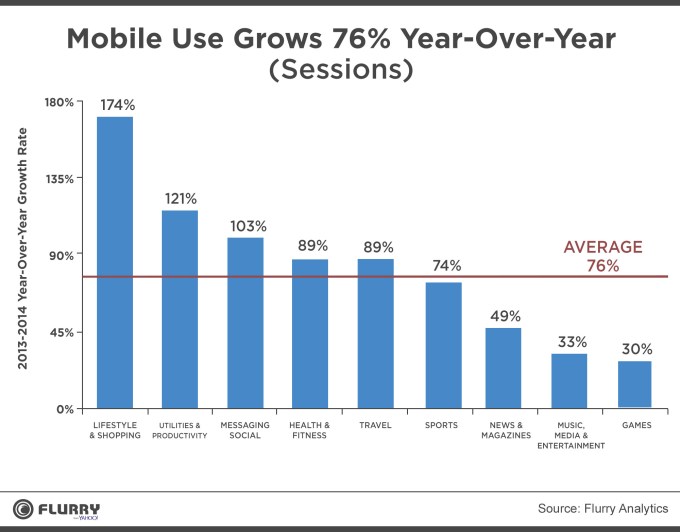 A number of e-commerce startups launched on mobile last year, many of which we reported on here at TechCrunch, including Threadless, Shop-Hers, Spring, Curbside, Downtown, Paytm, House, Kwoller, and Strut, to name just a few. But the category growth isn’t only about users trying new apps – it’s about them getting more comfortable shopping on their smartphones and tablets in general, whether that’s buying from big retailers Amazon or Walmart, comparison shopping with barcode scanners, checking out coupons and offers on apps like Coupons.com, Ibotta, or Target’s Cartwheel, social shopping in Wanelo or Wish, browsing marketplaces like eBay’s, buying and reselling secondhand clothes, as on Twice or thredUP, and more.

Flurry took a deep dive into Shopping apps and user behavior and found that users shop on their smartphones while out and about during the day, with Shopping app use spiking during the commute time of 9 AM and at noon (likely, lunchtime). Shopping also spikes again during “prime time” at 8 PM, making it something of a leisure activity that takes place as users unwind after work and dinner. 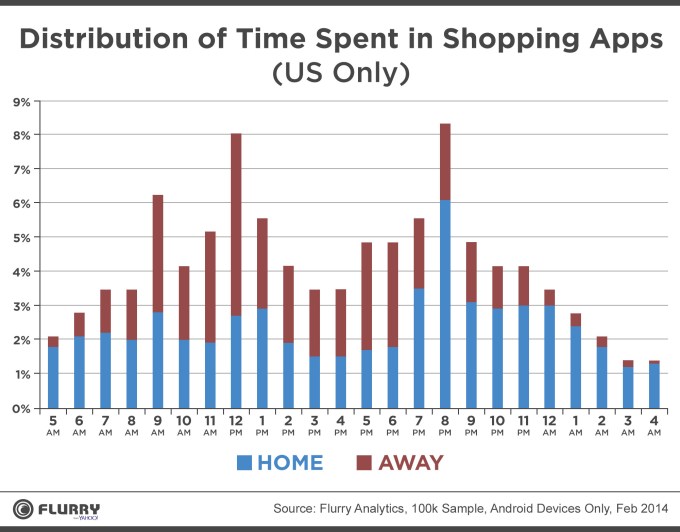 Meanwhile, growth in the Utilities & Productivity category last year indicates that users are also getting more comfortable from doing real work from their mobile devices. In 2014, Microsoft brought Office to mobile, making the suite available not only on Windows devices, but also iOS and Android. It also bought a work-focused mobile emailing app Acompli, which wasn’t even available on Windows Phone.

Messaging apps saw triple-digit growth in 2014, as the apps themselves became platforms that offer more than communications – apps like Snapchat, LINE, and WeChat added things like payments and games. Facebook bought WhatsApp for $22 billion last year, finding itself a new platform besides Messenger for the coming age of private messaging, which has called the “new social media.”

What’s interesting is that some of what Flurry calls the “early mainstays of mobile” saw slowing growth, as their market matured in 2014. Games growth, for instance, slowed from 61% in 2013 to 30% in 2014. Music, Media, and Entertainment: growth is now down to 33% from 79% in 2013. It’s still double-digit growth, which is notable, but it’s still a shift worth pointing out.