Payments are finally cool. And the more than 1,500 payments startups on Angel List that believe they have cracked the code to solve a piece of the payments puzzle attest to this.

Given all the noise in the tech community this year with the introduction of technologies like One Touch payments and Apple Pay, you would think that digital payments have taken over the world.

But it hasn’t quite happened. Today, 85 percent of transactions are still done via cash.

2014 started changing the game for payments, and I believe we’re at an inflection point to push more payments than ever into the digital realm for 2015 thanks to innovations in authentication, shopping on social networks, and near field communication-based payment technology.

The truth is only about 1 percent of commerce happens on mobile today, which is hard to believe considering there are now more mobile devices than people in the world. But I think that’s all about to change, and authentication is going to be an even bigger driver in mobile shopping and conversion in 2015.

As shoppers, we want security, but we don’t want to give up any convenience. The technology is there to power payment experiences that don’t require entering a password or sharing credit card details. We already have invisible payment experiences that are actually more secure and allow people to pay for an Uber ride, rent a room on AirBnB or Venmo a friend after grabbing a meal out. But more companies need to get on board.

With the increasing number of security breaches this year, businesses have every reason to re-evaluate the way they protect their customers. Nobody likes typing in a credit card, and it’s simply not very secure to share that data with sellers. But, that’s only part of the equation. Authentication is a major factor.

Today, Apple and Samsung’s latest smartphones and tablets have fingerprint authentication to make secure, one touch mobile payments a reality. In 2015, every company is positioned to make authentication – and shopping – much easier and more secure.

We recently saw Alibaba partner with smartphone manufacturer Huawei to let Alipay users pay with their fingerprint. This fall, Apple opened up Touch ID to third-party apps. And, this month the FIDO (Fast Identification Online) Alliance released version 1.0 of its open authentication standard, so we can expect fewer passwords and more secure login systems in 2015.

Frost & Sullivan predicts the number of global biometrics smartphone users is expected to reach 471 million in 2017. So, when you add up all the pieces of the equation, it’s pretty clear by next holiday season you won’t be using a password or typing in a credit card on your mobile device to buy that 65-inch TV.

Every Social Media Platform Will Start To Be Shoppable 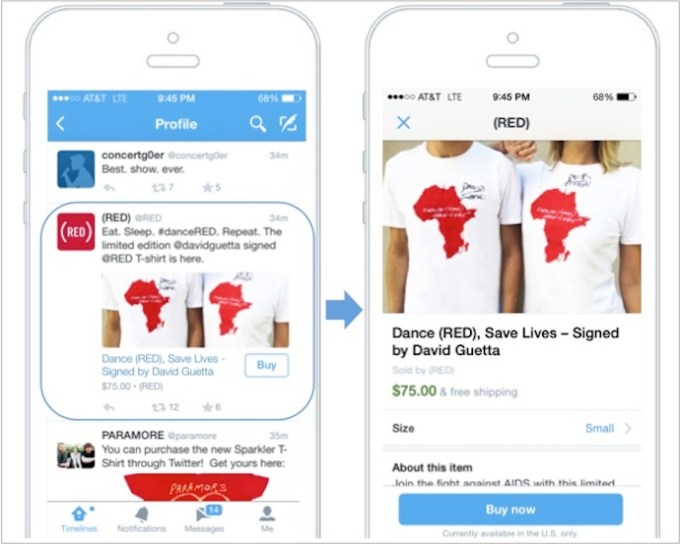 In the mid-2000’s, Facebook and Twitter came along and we started having open conversations about our likes and dislikes, and we started sharing more and more data about ourselves and our preferences. Today, Facebook alone is up to 1.3 billion users worldwide. That’s a lot of people and data to not have shopping happen here. Facebook and Twitter seem to agree. That’s why we saw both social media platforms try out “buy” buttons (a way to buy something directly from their sites) this year.

Then we have apps like Pinterest that help us share and discover products we’re interested in, creating a strong social context around these products. Instagram has also moved beyond peer-to-peer photo-sharing and now has the brands we love sharing photos of the things we love. What’s happened is social networks and apps are creating new opportunities for retailers to connect their customers with products and services in the moment they want to buy them.

We’ve seen encouraging signs this year for the future of near field communications (NFC) in the U.S. (a technology that’s long been used around the world). You might be asking yourself why will it still be two years before everyone uses it?

Today, only two percent of U.S. retailers have point-of-sale systems that are NFC-enabled, and there’s around nine million retailers in the country. It’s expensive for retailers to upgrade their hardware and the consumer demand hasn’t been there. Many consumers have yet to try out NFC payment solutions like Apple Pay, Softcard and Google Wallet on their phones. And, after three years, only 20 percent of Android phones are using Gingerbread, which was the first HCE NFC capable Android OS.

Today, only two percent of U.S. retailers have point-of-sale systems that are NFC-enabled, and there’s around nine million retailers in the country.


In 2015, the infrastructure needed for NFC to succeed will start to scale more quickly. In the U.S., there is an accelerated pace for retailers to move to Europay Mastercard and Visa (called EMV), which is a chip and PIN technology vs. magenetic stripe on a card), since card networks dictated that by October 2015 they would pass risk of fraudulent charges to retailers who haven’t adopted the new standard. So, many retailers are going to be taking a closer look at their existing POS experience to figure out where there’s room for improvement.

We’ll also start to see more innovation in how companies address what’s in it for the consumer to use NFC. People need something extra that is going to push them to start using their mobile phone to pay in store – whether it’s loyalty or offers integration – but they need to feel this is an experience they cannot live without, just like television did for us almost a century ago.

2014 was the turning point — the year that more payments finally became more digital. A lot of mobile transactions have already ditched the password, and the technology exists to make a simpler more secure mobile payment – we know because many of us are already using this. Most of us are on social media and as we share more information about ourselves the growing expectation is that the products we want will be available to buy in seconds.

And as retailers and consumers start integrating these new mobile and online buying experiences into their daily lives, more people will start using NFC to make digital payments increasingly available in the offline world.