Some folks look away from homelessness. Jeremy Cowart looks straight at it, with kindness.

Cowart is a Nashville-based celebrity photographer and founded Help-Portrait, a global event that invites photographers to shoot and print portraits of the homeless and people in need in an effort to help people “smile, come together, and remember.” The last event, held in early December, resulted in over 40,000 portraits worldwide.

Cowart has begun using the tools of mobile photography – a ring of programmable LED lights and an iPhone – to shoot the homeless in his town. Cowart’s goal is to give homelessness a face by taking and printing beautiful portraits of people in need.

“In 2008 I decided I wanted to do something a little more meaningful,” he said. “I just went locally and did a photo shoot for them locally in Nashville. I realized this could be a bigger thing so I put the word out on social media.”

In 2009 thousands of photographers responded in dozens of countries countries. The last event brought together 10,000 volunteers in 28 countries.

This year he updated his rig to create a slightly less invasive photographic style. 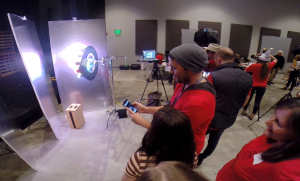 “Sometimes a big fat DSLR can be pretty daunting,” he said. “I just thought it would be fun to downscale to do something a little less intimidating.”

Cowart built a custom light ring using LIFX lights, a wireless lightbulb solution. This allowed him to control the brightness and color of the lighting from his phone. He then shot the portrait through the ring. Because he wanted things to work as quickly as possible he then sent the photos to Lightroom or even directly to an Epson printer he had on location.

“The goal is to not make people wait and to make it as quick as possible without sacrificing quality,” he said.

Cowart, who also founded photography request site OKDoThis, expects to have an even bigger turnout next year, on the first Saturday of December 2015.

“I started this in Nashville and now this is happening in over seventy countries and every US state,” said Cowart, surprised. For a photographer familiar to shooting celebrity glamor, he said, shooting average people and offering them pride, beauty, and attention is its own reward.