“Isn’t that a dating app,” you say. Yes, but one enterprising victim of repeat thefts used the popular mobile app to ID the person he claimed is responsible for stealing $30,000 worth of computers and gadgets from his company.

NBC reports that David Petersen, co-founder of San Francisco-based startup Buildzoom, turned to Tinder after CCTV photos of a woman sneaking into the company’s offices generated no leads via more traditional social networks and Buildzoom’s own blog. 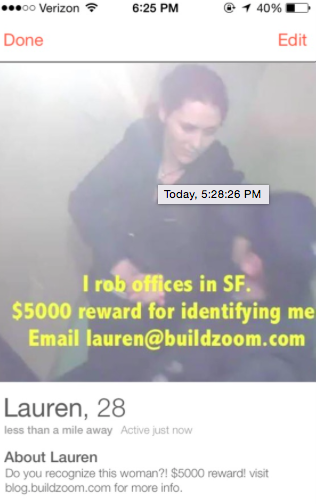 Petersen initially filed a report with police back in July, but last week he opened a Tinder account, uploading the suspected thief’s photo alongside the words “I rob offices in SF, $5,000 reward for identifying me.”

Hey presto, he told NBC that Buildzoom received an email with her name and a photo just two days later.

Petersen has since passed the information on to police, although they are yet to make an arrest based on the new information.

Nonetheless, the use of Tinder is particularly interesting, highlighting the fact that open social networks like Facebook and Twitter aren’t necessarily the answer, particularly when so much information flows across them.

Tinder told NBC that the case was “a very creative use” of its service, adding that it is “happy to hear that Tinder is helping people connect for a variety of reasons.”

Tinder is planning to introduce its first paid features next year, which are likely to include an undo button. Despite the potential success of this case, we don’t expect to crime-fighting options any time soon.