I’m reluctant to cite what I’m about to cite. It’s scathing. It’s scurrilous. It’s caustic criticism that seems often overblown and, in some cases, deliberately devoid of context. It’s the New York Times Magazine‘s condensation of Nicholas Carlson’s book about Marissa Mayer, and it’s clearly an attempt to do to her what Hatching Twitter did to Jack Dorsey.

But here it is — and I’m linking to it because I feel like I have a dog in this fight. You see, unusually for a tech columnist / software engineer, I am, to my increasing regret, a frequent and longtime Yahoo! user. Flickr is still my primary photo repository. My vanity site is still hosted on Yahoo!, and the email address it points visitors towards leads to a Yahoo! Mail account.

It says something that I actually feel I need to quickly follow the above paragraph with a lengthy disclaimer lest I immediately lose all tech credibility. Yahoo! is not well-respected among the tech cognoscenti. A cutting-edge close friend once looked over my shoulder at the Y! Mail client and said, with undisguised horror, “That’s not where the email I send you goes, is it?” She was visibly relieved when I assured her otherwise.

But back when I started using it, during the first dot-boom, Yahoo! had the best webmail service there was. Back then they were a tech company. I can easily move my vanity email address to GMail–I own the domain–but I feel like the many-eyed hydra of Mountain View knows enough about my life already. I’m holding out for some fully decentralized Maelstrom email service. Until that arrives, Yahoo! is…

…probably not good enough. Alas. Every few months I find myself confronting this: 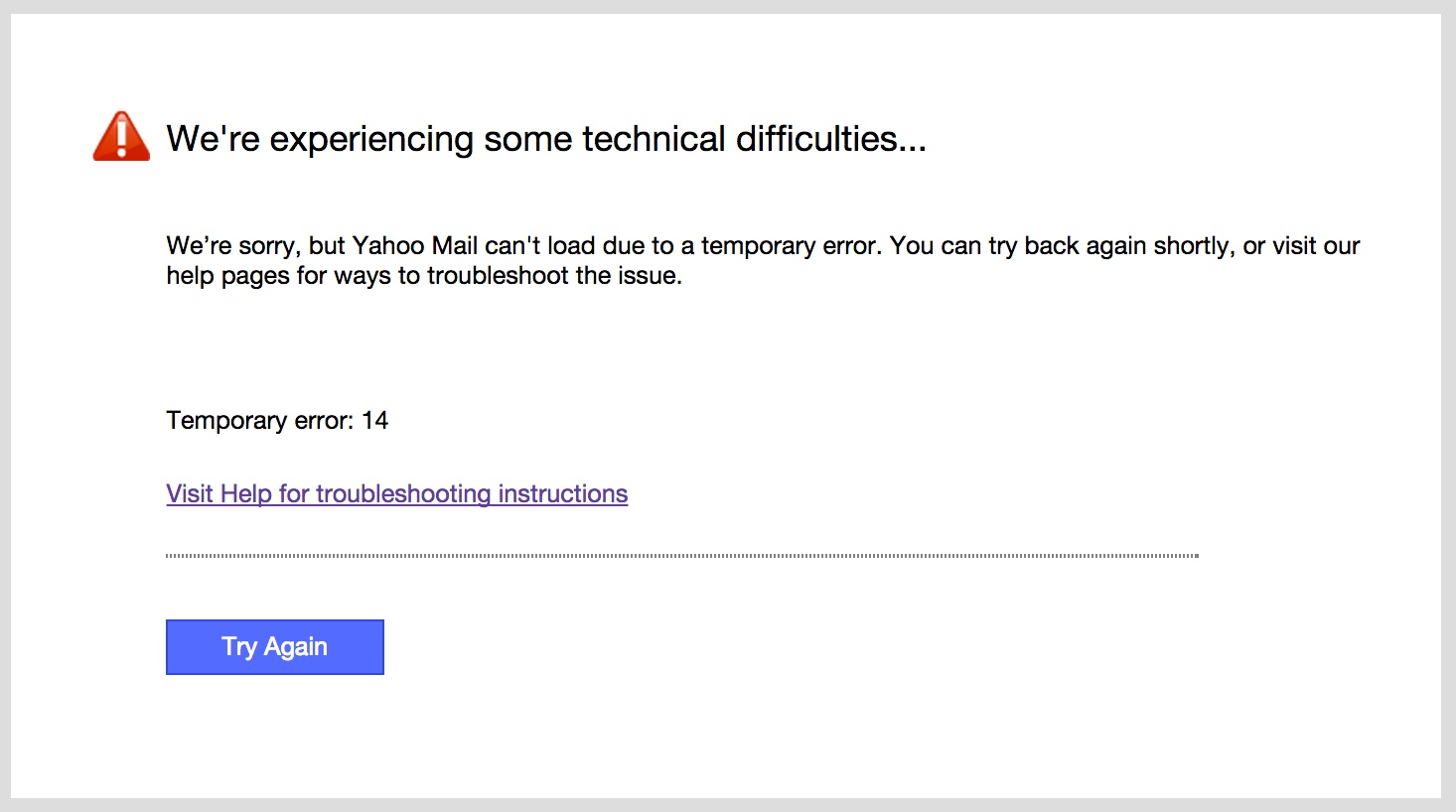 and/or the banner image atop this article. Sometimes for hours, intermittently, over a period of some days. Then, eventually, presumably in a dark windowless dungeon somewhere in Sunnyvale, Yahoo!’s engineers get their act back together, and my email starts working again … for another couple of months, until the cycle begins again. And I think to myself, yet again: “I know webscale email is hard, but I also know that other companies of a similar size seem to manage it a lot more competently. What’s wrong with Yahoo!?”

It’s not just mail. I also used to follow NFL/NHL/NBA scores/games on Yahoo! Sports — until, earlier this year, some crazed ad embedded in their mobile site started popping up a modal dialog box on every single pageview. For days. And I thought to myself: “You know, quite aside from that maddening ad, for a company allegedly focused on mobile, their mobile sports news site is terrible, clumsy and so ugly that it hurts the eyes. How could this be? What’s wrong with Yahoo!?”

Well. Thanks to Nicholas Carlson, I now have some idea.

I don’t care about Marissa Mayer’s alleged color-scheme micromanagement, or lateness for dinner with ad execs, or whim purchase of the “Saturday Night Live” archives. I am, however, flabbergasted that:

Mayer also favored a system of quarterly performance reviews, or Q.P.R.s, that required every Yahoo employee, on every team, be ranked from 1 to 5. The system was meant to encourage hard work and weed out underperformers, but it soon produced the exact opposite. Because only so many 4s and 5s could be allotted, talented people no longer wanted to work together; strategic goals were sacrificed, as employees did not want to change projects and leave themselves open to a lower score.

Stack ranking! They adopted stack ranking! The obviously internally destructive system (at least for software companies) that helped to drive Microsoft into irrelevance, and was finally abandoned in Redmond last year! What were they thinking? You don’t pay back technical debt by introducing stack ranking.

(Note: Yahoo seems not to have learned what Microsoft did, which is that "forced ranking" is 100% counterproductive.)

I’m not saying this is the cause of all their problems; those long predated Ms. Mayer. I can see the case for stack ranking as a temporary measure to remove deadwood (although that still only makes it slightly less terrible.) And I admit that every now and then she makes a really smart move, like hiring Alex Stamos as CISO and Yan Zhu as a security engineer.

But it sure seems that no matter how sleek and newly painted the Good Ship Yahoo! may seem from a distance, it’s still taking on a lot of water, while its sailors keep fighting each other to stay above its slowly rising waterline. A boat that big is hard to sink, but also hard to steer.

I remember when Yahoo! was a technology company. Then, famously, it started treating technology as a commodity. It seems that once that kind of rot gets into your business, it’s almost ineradicable. I can’t help but think that not even Marissa Mayer can turn Yahoo! back into a technology company now — especially not with stack ranking.

There’s a larger lesson here. Technology is increasingly at the core of every major company. Eventually they’ll face the choice Yahoo! did a decade ago: explicitly embrace being a technology company, and ride the tsunami … or try to reject it, and, eventually, capsize. Whether Mayer manages a turnaround or not, Yahoo! will make for an interesting object lesson. My prediction: they continue to slowly flail their way into irrelevance.