Milliseconds make a difference when it comes to chat. The less lag, the more it feels like being in the same room. But with texting, we lost the cues like nods and “mmhmm”s that tell you someone heard what you said.

Today Facebook Messenger takes a leap forward on both fronts with a big speed improvement across all its versions, and a new animation that shows you whether your message is sending, sent, delivered, or read. And rather than some tiny gray text, Messenger uses your photos of your friends’ faces to show exactly who in the convo has seen what, the company tells me.

Facebook originally came up with the FacePile design about five years ago for a plugin that showed which of your friends Liked a website. Now it’s found to repurpose the design to let you know at a glance who has seen your messages.

The new Messenger design is now rolling out on iOS and Android in Europe and the US, and will go worldwide soon. You can see how the read receipts work in this quick demo video:

“What were really want is Messenger to feel like the fastest and most reliable mobile messaging product” Product Manager Lexy Franklin tells me. “We’ve done a lot of work on performance on the backend, reducing end-to-end latency…to improve efficiency on all device types.”

David Marcus, Facebook’s new head of Messenger and former PayPal president, explains speed is critical, saying “while most people don’t think about it, they can feel it”. 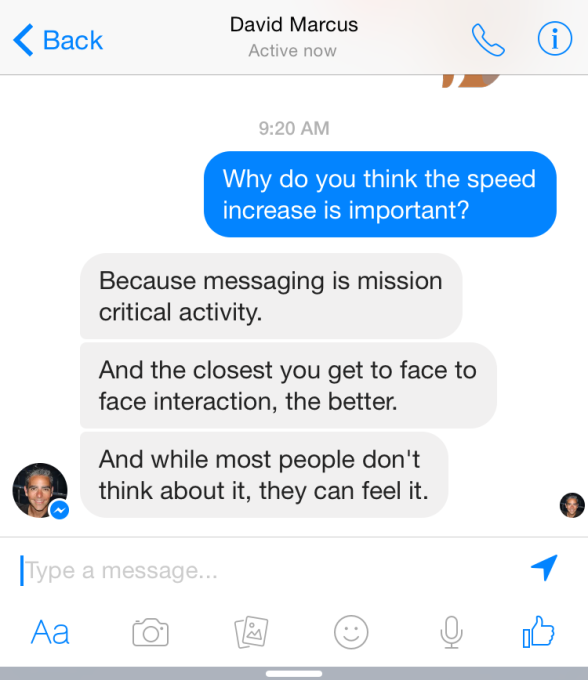 Facebook hopes doubling down on the core experience of chat will give it an edge as it fights a global war for messaging. WeChat, KakaoTalk, Kik, and more are all racing to be the quickest, slickest chat app. Simultaneously, Facebook has to fend off richer communication tools like Snapchat’s visual messaging, Line’s stickers, Google’s video chat, and Twitter’s worldwide town square.

Some of its competitors may try to squeeze money out of messaging directly, but after chatting with Marcus, it seems like Facebook’s strategy for now is to focus on utility that drives lock-in to its whole social platform. Facebook makes plenty of money from ads in its News Feed, it just needs to keep people bouncing around its blue and white apps.

That’s the same reason Facebook today launched “Stickered For Messenger”, a companion app for pasting stickers on top of photos and sending them to friends. It doesn’t monetize directly, at least not yet, but if it can make people use Messenger more, they’ll probably use Facebook more, and see more ads. 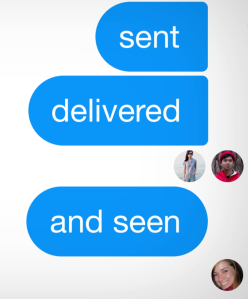 FacePile read receipts help with group chats, as they show who in the conversation has seen what message. Here two friends have made it as far as “delivered” while one has looked at the most recent message “and seen”.

In October, we scored screenshots showing Facebook was working on a peer-to-peer payments feature. I’ve learned from a source that that feature is still in development, with a “$” button on Messenger’s compose screen that lets you send money to friend.

But while at first I imagined Facebook’s putting a tax on those payments to earn revenue, perhaps even challenging the remittance industry that charges migrant workers exorbitant fees to send money home to their families. It increasingly seems like Facebook will try to offer payments for free to boost usage and loyalty to Messenger. It’s biggest competitor is still SMS, so any value it can add beyond what texting offers will help Messenger grow.

Franklin admits “There are tons of things we’re thinking about so we can create cool experience.” First thing’s first, though. Make messenger the fastest and clearest way to chat. Facebook might want you to spend as much time as possible on News Feed. But Franklin says the goal of Messenger and its new read receipts is to let you send a message and know it was delivered as quickly as possible so you can put your phone back in your pocket. That way you can go back to living.