Facebook has more news to share at f8 than can fit in a single day, so it’s adding a second for its developer conference now slated for March 25th and 26th, 2015 at San Francisco’s Fort Mason Center. Registration for the first two-day f8 will open in early 2015, but developers hoping to attend can sign up for a reminder of when they can vy for tickets.

Facebook explains the expansion, telling me “Facebook’s developer community is bigger today than it ever has been. The scope of the company’s products has broadened, and there’s more content to share than can fit into a single day. The additional day means double the number of technical sessions, product demos, and onsite experiences for Facebook’s growing developer community.”

Facebook’s previous f8 conferences includes the ones it held in 2011 and 2014 at the Concourse center in SF were all single day affairs.

Last year’s was jam-packed with announcements including its Audience Network mobile ad network, anonymous login, the App Links deep linking framework, the mobile Like button, and a massive reduction in what data about people’s friends apps are allowed to pull from users. CEO Mark Zuckerberg also announced the conference would now happen every year rather than every few years like before.

Similar to other big developer conferences like Google I/O, the events typically start with a a keynote full of news in the morning, then continue with deep dive info sessions and hands-on demos to teach developers how to use the new tools at their fingertips. 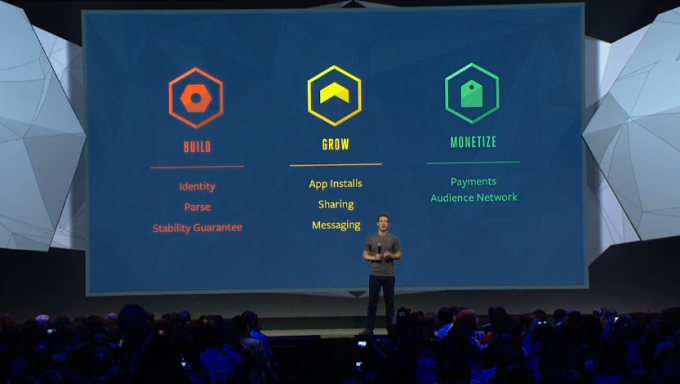 While we don’t know anything for sure, expect new developer capabilities, improvements to Facebook’s advertising system, and an expansion of the Parse mobile-backend-as-a-service development platform.

Yesterday, MixPanel raised a $65 million Series B round to fund expansion of its mobile analytics service that lets developers track everything users do in their apps, and even predict what they do next. I suspect Parse’s analytics, currently much more basic than MixPanel’s, will get a big upgrade.

Expect Facebook to strengthen each part of this sequence as it tries to keep developers and their advertising dollars away from competitors like Twitter and Google.