With the Cord Project, a pair of former Googlers are aiming to encourage people to use their smartphones for something a little unusual — talking to other people. You know, with your voice.

Now, the obvious question here is, “Uh, can’t I already do that with my phone? Isn’t that, like, the whole point?”

But literally right before I met up with Cord Project co-founders Thomas Gayno (CEO) and Jeff Baxter (designer), I had a moment that handily encapsulated some of the reasons behind the app. I was standing outside their office, shivering (it was a winter night in Brooklyn), struggling to text them (through gloves!) and let them know that I’d arrived. Then I remembered that I had this amazing device that could actually communicate instantaneously, and required only minimal use from my hands — why the heck was I bothering with text?

Now, my avoidance of phone calls has probably gotten more than a little out of hand, but people text a lot, is what I’m getting at. And while voice has been incorporated into other messaging apps, it’s usually shoehorned in there with text and/or photos, rather than creating a new or unique interface. (For example, Gayno said that when people send multiple voice messages in WhatsApp, you end up with “this thread of play buttons,” which isn’t very appealing.)

And plain old talking still has plenty of advantages — not just in situations where you really want to get ahold of someone so they can let you into their office, but also, as Gayno argued, when a little more emotion is called for.

So The Cord Project’s hope is to take the things that are good about texting (like the fact that you don’t have to answer right away, and you don’t have to listen to minute-long voicemails) and bring them back to voice messaging.

“You get the emotion and the nuance you get with a call with voice, but you also get the speed and asynchronous communication that you get with text,” Baxter said. “It’s this great middle ground that no one’s nailed yet.” 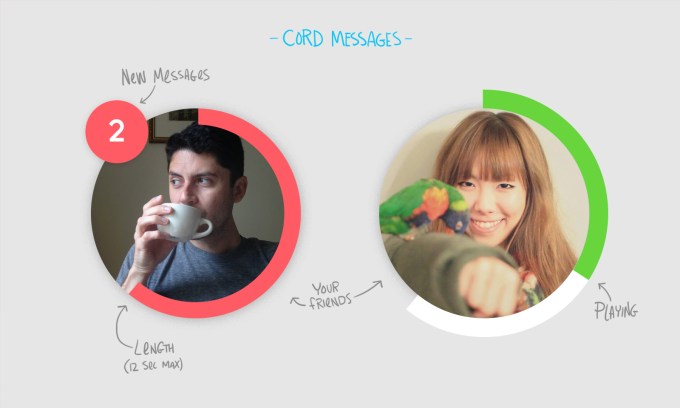 Gayno and Baxter gave me a quick demo of the app, which is called Cord, and I’ve been trying it out myself over the weekend (partly because other TC team members have started using it, too). It’s a pretty simple interface — you see a homescreen with images of people you’ve talked to recently, and if you tap on those icons, you can listen to their most recent message. You can also hit the microphone button to record a message of your own — the message has to be 12 seconds or or less, and there’s a little indicator that shows how much time you have left.

Other features include the ability to save your favorite messages, to send a message to multiple recipients, and to bring up your full phone book of contacts.

As soon as the demo ended, I brought up features that I’d want to add, like the ability to block other users, create groups, and search through my favorite voice messages. Apparently that’s all on the road map, though some of the items are probably closer to fruition than others — Baxter said blocking will be “the very next thing we implement.” And the long-term goal is also to move beyond smartphones to other devices, like smartwatches and other wearables. (After all, when Gayno and Baxter worked together at Google’s Creative Lab, a lot of their work involved Google Glass.)

The Cord Project raised $1.8 million in seed funding led by Lerer Hippeau Ventures and Metamorphic Ventures, with participation from Google Ventures, Greycroft, Dave Morin’s Slow Ventures, and Gary Vaynerchuk. Gayno and Baxter touched on a number of different possibilities for making money, like selling stickers or offering a version for team communication.

The company actually launched an iOS version of the app back in September, although Baxter and Gayno argued it was really just a test version — they consider today, with an improved iOS app and their first version on Android, as their true launch.

By the way, the Cord Project team also released an app called Shhout, with what Baxter called “anonymish” voice messaging. (It’s not completely anonymous because, well, your voice isn’t actually disguised.) Basically, it was an experiment with public messaging — Gayno said that while the company focus is on Cord itself, it may do other “little spinoff” apps in the future, with the aim of testing ideas that aren’t quite ready for the main product.

“We come from this culture at Creative Lab and Google of really experimenting and trying things even if they might seem weird,” Baxter said. “We wanted to continue that similar spirit.”