Later today, Tim Berners-Lee will be making an appearance in London to talk about how well the world is doing at making the Internet accessible to everyone and a place safe from commercial and political interference, themes that have been strong for the inventor of the World Wide Web. Ahead of that, the World Wide Web Foundation — an organisation started by Berners-Lee — has released its Web Index annual report, a global pulse check on these issues over the past year.

“It’s time to recognise the Internet as a basic human right. That means guaranteeing affordable access for all, ensuring Internet packets are delivered without commercial or political discrimination, and protecting the privacy and freedom of Web users regardless of where they live,” noted Berners-Lee, founder of the WWW Foundation and director of standards body the World Wide Web Consortium.

There are both interesting and frustrating conclusions in the report.

On the theme of accessibility, the foundation found that wealthy countries such as those in the northern part of Europe are continuing to top the rankings when it comes to reaping the benefits of Internet progress (faster speeds, easier and cheaper access, less information restriction).

However: more than 60% of the world’s population still cannot get online, working out to 4.3 billion people; and of those who can access the net, 1.8 billion — half of all current Web users — are seeing significant restrictions on what they can do online.

On the subject of privacy, it looked at how privacy questions play out in terms of government requests for data. Tapping into the new revelations we have had about how (and why) States access our private online data, the WWW Foundation found that Twitter saw the biggest rise in U.S. government information requests in the past year. Overall, privacy and freedom of expression violations are on the rise.

We’ve embedded the full report below, but here are a few of the notable data points contained in it. We’ll also report on what more comes out of this morning’s speech from Berners-Lee later today. 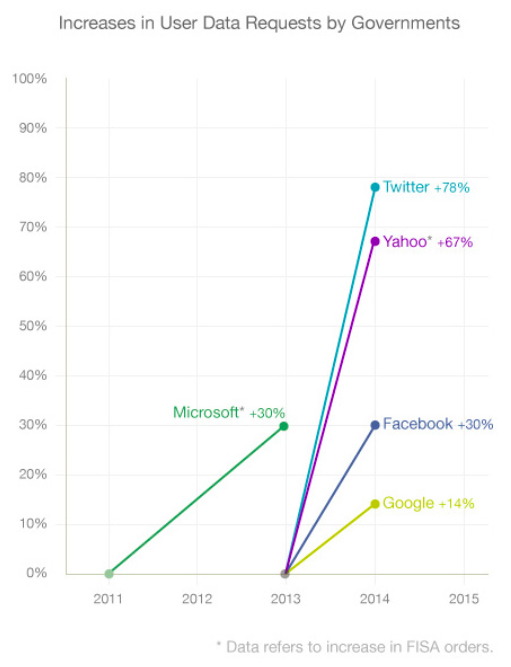 Twitter may have less monthly active users than Instagram at the moment, but its continuing growth, combined with its place as a center for real-time, active conversations among people, has seen its requests for information from the U.S. government rise starkly in the last year, up more than the rises of Microsoft, Facebook and Google combined. Yahoo — which has been an outspoken about being able to disclose this kind of data to users — saw nearly as much growth, up 67%. (That’s a number that may have something to do with the fact that Yahoo now owns Tumblr, which as we pointed out recently was the fastest-growing social network of the last year.)

Generally legal safeguards against surveillance are in decline 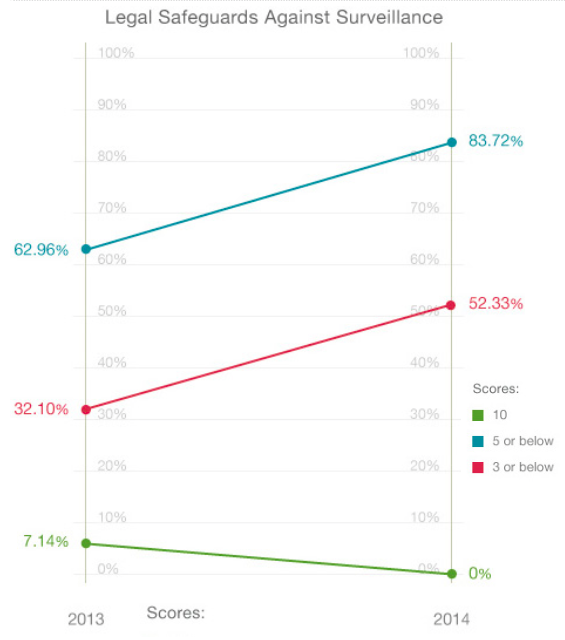 The table above looks like it’s showing safeguards against surveillance are on the rise, but in fact, what it is tracking are how those with the most safeguards — the green line — are actually on decline, with the number of countries scoring poorly for safeguards actually growing, with the proportion of countries whose legal safeguards for privacy were judged “weak to non-existent” now up to 83% from 63% a year ago. This works out to policies that affect 1.5 billion people, the foundation says.

There are a couple of things at play here. The first is that a 2013 UN resolution — calling on member states to review their laws and practices “to ensure that surveillance did not interfere with fundamental rights” — has proven so far to be totally ineffectual. The second is that, as the WWW Foundation points out, these changes in proportions are a result of “the fact that we now know a lot more about what governments are getting up to. Much new information has come to light in the past year about the ability of state and intelligence actors to circumvent due process and the rule of law, even where such safeguards are nominally on the books.”

Notably, it points out that the UK, US, Australia, Canada and France all score below three out of a possible 10, “placing them in the company of China, Russia, and Turkey, to name just a few.” Not great company, when civil rights are in question.

Surveillance, of course, is just one part of the mix when it comes to privacy issues. Another has to do with online censorship, where the WWWF found that it is growing an now seen in 38% of countries surveyed (versus 32% a year ago).

And freedom of expression is also being played out in the bigger issue of net neutrality. The report says that only 25% of countries “effectively enforce clear rules against commercial or political discrimination in the management of Internet traffic.”

The form this issue takes affects both more and less developed countries. In Europe, we are seeing a contentious implementation of the Right to be Forgotten, where individuals can ask search engines like Google to remove their data from searches. In Iran, the government is reportedly implementing a new way of identifying every user who goes online, one part of a bigger scheme of monitoring and limiting Internet access in the country. 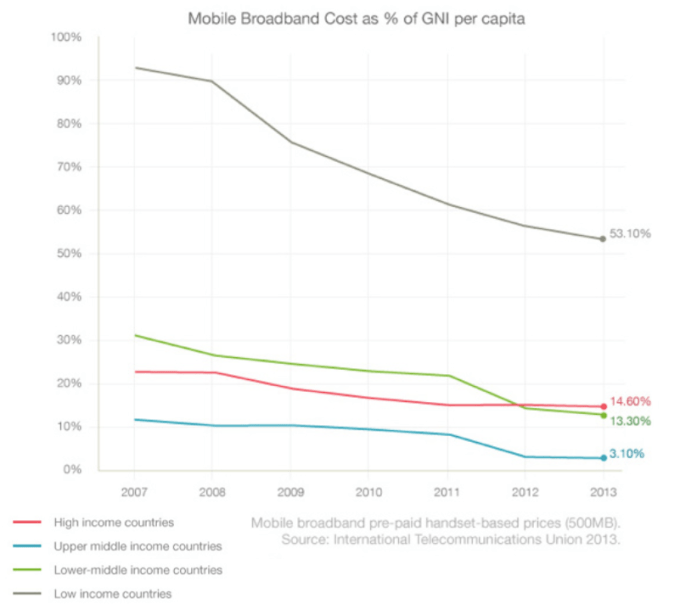 Mobile broadband is the main way that people in poorer, developing countries get online, and will continue to do so in the future, but ironically it remains a high cost for them. Meanwhile, those of us living in wealthier and developed countries are seeing pricing for mobile broadband continuing to drop and cost far less than it does in the markets where people can hardly afford it. In fact, the report notes that 225 million people live in countries where the ability to pay may limit the content and services they can access.

The WWW Foundation describes this in terms of how cost of data compares to pricing of handsets, citing figures from the ITU. It speaks to why companies like Facebook and Google, with initiatives like Internet.org, are seeing a lot of interest and are (whatever you think of their commercial opportunism) filling a big need.

Still, it’s notable that in the past seven years, the gap between the prices for the wealthiest and poorest countries appears to be narrowing, and in most cases we are all seeing price drops.

Something to possibly worry about, however, is the trend in the wealthiest countries: it looks like mobile broadband pricing is actually on the rise even as prices come down elsewhere. If you consider that the higher economies are often bellwethers for what trickles down, we may be in store for some growing prices in the future as carriers look for bigger margins against slowing growth due to handset saturation.

The top countries of the Web Index: dominated by northern Europe, USA, and Korea 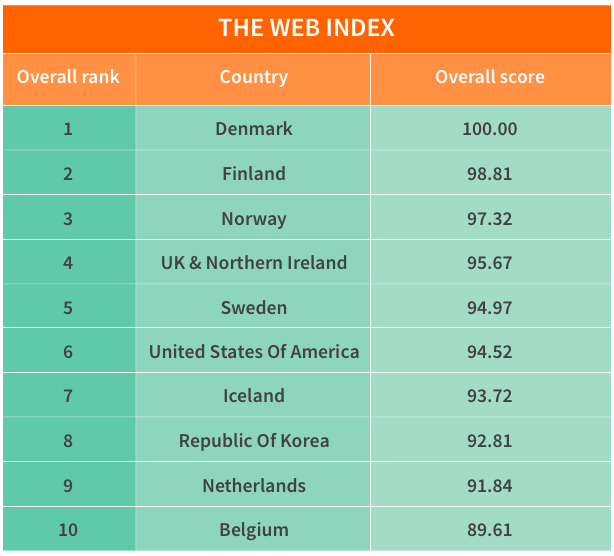 As you would expect, when it comes to the bigger picture for top-ranking countries across a composite of categories including Internet access, privacy, and access to information, out of 86 countries, Europe — specifically Scandinavia and other countries in the north — are scoring the best, led by Denmark. Their dominance is only broken by the U.S., which ranks at number-six, and South Korea.

Among middle income countries, Hungary was judged to be the highest ranking across these categories, while Kenya topped the list of low-income countries.

“The richer and better educated people are, the more benefit they are gaining from the digital revolution. This trend can and must be reversed,” said Anne Jellema, CEO of the World Wide Web Foundation, and the lead author of the report, in a statement. “Extreme disparities between rich and poor have been rightly identified as the defining challenge of our age, and we need to use technology to fight inequality, not increase it.”