The use of social networking websites such as Facebook has dipped in the U.S and U.K., according to research conducted by U.K. telecoms regulator, Ofcom. Visits to ‘traditional’ social networks also fell in Japan and China between September 2013 and October 2014, it found.

The research identified the largest drop in weekly visits to social networks as being in the U.K., with the proportion declining from 65 per cent accessing social networks weekly in September 2013 to 56 per cent in October 2014. In the U.S. the dip was far more marginal — dropping from 56 per cent to 54 per cent.

In most of the other countries surveyed by Ofcom, in Europe and also Australia, social network website use grew over the period, with usage in Italy seeing the biggest jump — rising from 69 per cent to 75 per cent. Weekly usage in Germany remained static at 54 per cent. 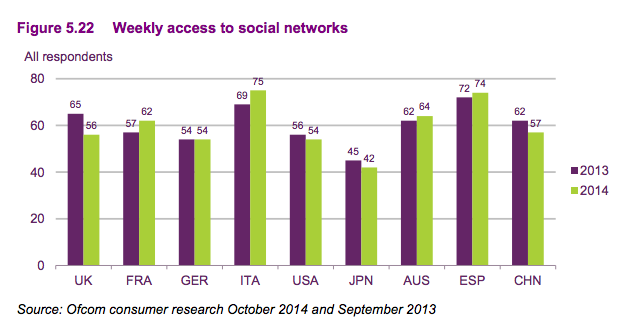 Ofcom suggests one reason for a decline in accessing social networks in the U.S., U.K., Japan and China may be the rise of other types of social media services which do not involve networks of connections — with the regulator specifically name-checking online video sites and instant messaging as cannibalizing social network usage.

Messaging apps have of course been the big growth and engagement success story of the digital space in recent years — underlined by Facebook’s $19 billion purchase of WhatsApp earlier this year.

Ofcom’s report also compared the popularity of Facebook and YouTube for accessing video on mobile devices — finding the latter outstripping the social network across all surveyed countries:

Despite identifying some loss of momentum for social networking in certain countries, Ofcom notes the activity remains hugely popular, especially on mobile. The research found it is the most popular mobile Internet activity for the majority of surveyed countries, with only Japan and China bucking the trend. 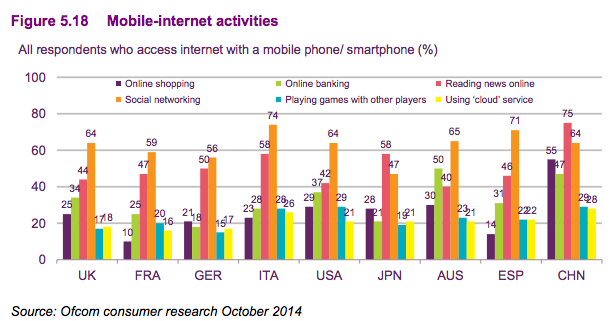