Apple has been seeing its smartphone market share erode over the last several years as its simple-and-small line up of iPhones competed against model after model of low-priced, big-screened, fancy-featured Android-based handsets. But it looks like its latest iPhone 6 models — with their larger faces, 4G compatibility and Apple Pay support — may be helping it turn the tide a bit.

The latest figures from Kantar Worldpanel, the WPP-owned market research firm, found that in the last three months up to October 31, Apple’s share of smartphone sales grew in nearly every market, against lower or even declining sales of Android handsets — which, to be perfectly clear, are still leading the market overall by some margin. 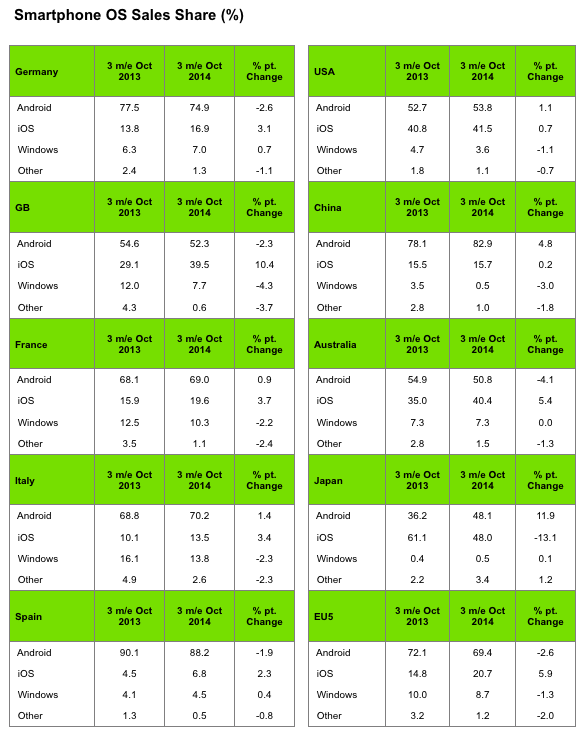 Within Android, it’s a mixed bag of who is in the lead, depending on which country you are looking at. In China, Xiaomi is the market leader overall (more on this below), but in most markets Samsung remains on top, with other players “getting share from each other more than share from Samsung,” Kantar’s chief researcher and U.S. head Carolina Milanesi tells me. The exception is the U.S., where LG is starting to woo some consumers away from its Korean rival.

Notably, the jump has been a drastic one in the UK — where Apple had only a 30% share of sales as recently as a month ago. This could be seen as a sign of each platform’s and brand’s sales pull going into the holiday season.

Commenting on Apple’s performance in Europe, Dominic Sunnebo, strategic insight director at Kantar Worldpanel ComTech, writes that part of the reason for Apple’s performance is its brand loyalty, on top of bringing in new users. “Apple has experienced a huge jump in sales share across almost all major markets thanks to the launch of the iPhone 6,” he notes. “Most of these sales were driven by loyal Apple users. Some 86% of British buyers upgraded from an older iPhone model, only 5% switched across from Samsung.”

Kantar does not break out how the smaller iPhone 6 has been faring against the iPhone 6 Plus across all markets (we’re asking) but it does give more detail for certain markets.

In Great Britain specifically, the iPhone 6 outsold the 6 Plus by a 4:1 ratio. Anecdotally, we’ve heard that the bigger model is skewing more to male users. But Kantar’s figures seem to indicate that in fact all the new models are catching men’s eyes. It notes that in its tracking, so far some 34% of sales were being made by 16-24 year olds, and about 64% of buyers are male.

Another interesting detail: the company’s own retail operation continues to pull in the punters. “Every time Apple releases a new iPhone the share of sales made through its own stores significantly increases, and this occasion was no different,” Kantar notes, pointing out that 31% of all iPhone 6 sales in Great Britain were sold directly through Apple’s retail operations.

The story for Apple is somewhat different in markets where it was already doing well. In the U.S. where iPhones made up four out of the five best-selling models over the past three months, Kantar notes that Apple sales rose by a “modest” 0.7%.

In a market where getting an unlocked phone is a lot less common, it also spelled out how the different carries fared. For now, it remains a two-horse show, with Verizon accounting for 42.2% and AT&T 41.4% of sales. AT&T however has a much higher share — 63% — of the the higher margin sales of the iPhone 6 Plus.

In the U.S. it notes that the iPhone 6 outsold the iPhone 6 Plus by a 3:1 ratio, with 6 Plus buyers tending to be older than iPhone 6 buyers.

Interestingly, after that, the iPhone 5s is still doing well, and the 5c, which some suspect may get discontinued, was not too shabby, either.

“Although selling for just over a month, the iPhone 6, with 33% market share, became the best-selling model among iOS devices for the three months ending in October 2014,” Milanesi says. “The iPhone 5s was the second best-selling iPhone model with 26%, and the iPhone 5c was third with 18%. The iPhone 6 Plus captured 10% of iOS sales.”

While Apple is seeing big gains in some markets, its growth is more tempered at the moment in Asia.

In China, Apple’s share was up by 0.2 percentage points and now stands at 15.7%. Part of the reason for the small rise, it seems, has to do with iPhone 6 availability only coming up in October. While Xiaomi continues to be the strongest smartphone brand in the country, with 30% of all sales, the iPhone 6 sold enough units between October 17 and 31 to become the third best-selling device in the month.

The one market where Apple didn’t do very well was Japan — surprising since this has been one of the most popular markets for iPhones in the last several years and appears to have been the top selling device according to another set of estimates. We’re asking why this may have been the case. It could be partly related to supply constraints, or again a later release date.

Here is a full interactive map of how the different markets are performing: