Mozilla today rolled out Firefox 34. While most browser updates these days aren’t all that exciting, this one includes a couple of interesting new features. What most users in North America will notice right off the bat, however, is that this is the first version of Firefox with Yahoo as its default search experience.

It’s easy enough to change the default search engine in Firefox, and I would guess that most current users will quickly switch back to Google. The Yahoo Search experience, which the company specifically tweaked for Firefox users, is perfectly all right for most searches. But at the end of the day, it feels like it doesn’t have some of Google’s smarts, especially when it comes to queries that would usually trigger Google’s Knowledge Graph. 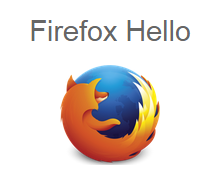 With today’s update, Mozilla is also moving its WebRTC-powered chat tool “Firefox Hello” out of the beta channel and into its mainstream release. The organization built this service, which allows you to start audio and video chats with other Firefox users right from the browser.

There is a good chance that you can’t see it right now, however, because Mozilla has rate limited access to it in order to prevent the system from getting overloaded. Only about 10 percent of all Firefox users currently see it.

Other updates include an improved search bar for users in the U.S. and the launch of WebIDE in the stable release channel. SSL 3.0, which has a number of known security issues, has been cut from this release. You can find the full release notes here.