Is there wriggle-room left in the last-minute offers space? U.K. startup Wriggle obviously thinks there is. The app, which matches you with last-minute availability at independent food, drink and entertainment establishments, is seeing its London launch today after initially being trialled in Bristol as part of accelerator Webstart Bristol.

It’s a familiar play: Users of the app get to discover new places to eat, drink and have other leisure experiences at a discount, in return for last-minute booking. And businesses get to shift unsold inventory, which in turn reduces waste and boosts revenue, with the possibility of picking up new customers along the way. 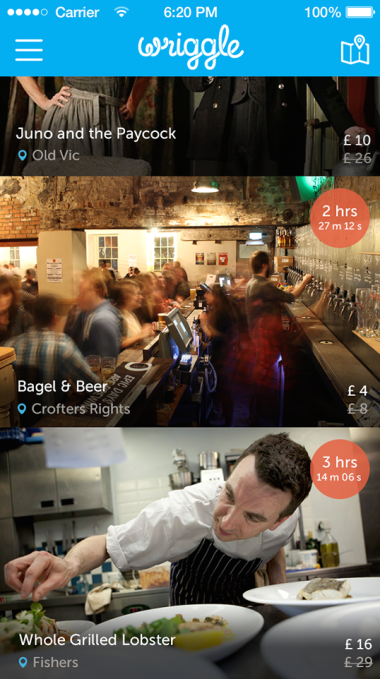 The difference, however, compared to a behemoth like Groupon — which made the daily deal concept both popular and subsequently toxic — is that Wriggle not only works with a ‘handpicked’ selection of independent businesses, but also that it takes a 9.5 per cent commission on each sale, which is usually significantly less than the likes of Groupon.

Here’s how founder and CEO Rob Hall explains it: “The problem for businesses is that all these restaurants, bars or events, even the successful and popular places that Wriggle works with, have excess capacity in the form of empty seats or perishable food that will go to waste that they would like to fill. Wriggle helps these businesses get new customers to fill empty space at the last moment — and importantly, in a way that protects their reputation.”

That last point is an obvious swipe at Groupon and the coupon chasers the service often attracts. “We fill a gap that Groupon can’t,” says Hall. “Groupon has done considerable damage to both their own reputation, and the reputations of the businesses that they work with, by not maintaining quality. Our partner businesses don’t often have empty space, but when they do, they can fill it in a very targeted way using Wriggle offers to customers.”

Funding-wise, Wriggle was initially backed by accelerator Webstart Bristol to the tune of £20,000. It’s since gone on to raise £156,000 via equity crowd funding platform Seedrs. And in September, Wriggle won a place in Seedcamp, the pan-European accelerator and investor.