Music while you shop? Two prominent startups in India have teamed up to push their respective causes and raise awareness of two nascent industries that could explode as smartphone adoption in the country grows.

Snapdeal may be India’s e-commerce underdog, since it competes with minted rivals Amazon and Flipkart, though it recently raised a whopping $627 million round of its own. Android accounts for as many as 90 percent of smartphones in India, and it almost certainly makes up a huge chunk of Snapdeal’s revenue — the company says 70 percent of its orders come from all types of smartphones and tablets, and it expects that figure to reach 90 percent within two years.

In pairing with Saavn, Snapdeal is giving India’s growing e-commerce customer base a further reason (beyond price and product exclusives) to point their mobile browser and money at its site. 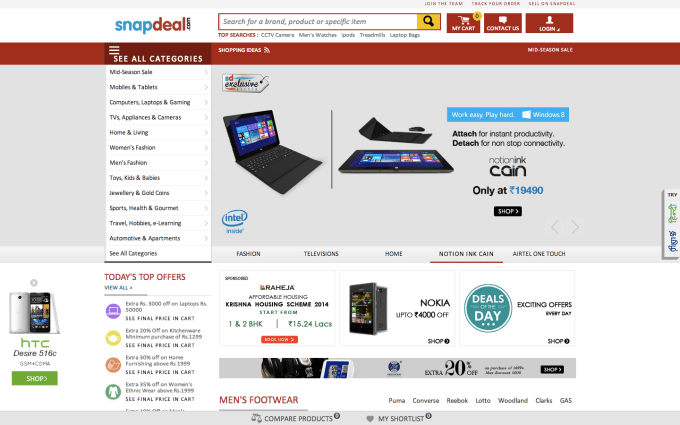 Saavn’s position isn’t that much different. It also competes with strong rivals and in an industry that could take off as India’s population buys increasing numbers of mobile devices.

The company offers “millions” of Indian music and international tracks in a similar manner to Spotify. It released a Pro version of its service last year, allowing users to pay 220 INR ($3.60) per month for ad-free listening and access to tracks offline — it also offers cheaper ‘lite’ plans. The startup, which is headquartered in New York with offices in India, recently raised undisclosed funding and reshuffled its leadership team, as it prepared to up its competition with Rdio — which snapped up Indian startup Dhingana — and local rival Gaana.com, a service from Indian media firm Times Internet, for the attention of the public.

Getting Snapdeal on Saavn’s side could give it vast exposure to new customers, many of whom it will hope are impressed enough by a two-month free trial that they buy Saavn Pro with their own money once it ends.

The deal is a first of its kind in India, and possible the world, and the heads of both companies are excited at the potential of their union.

“Music and shopping represent two of the most ubiquitous smartphone use cases in India, so it feels very natural to create an alliance that supports both of these activities simultaneously,” said Vinodh Bhat, co-founder and president of Saavn.

“This partnership with Saavn is in response to this growing penchant for mobile shopping amongst our customers. We want to encourage that trend by providing easy access to what they love most — a truly high quality, uninterrupted music experience,” commented Kunal Bahl, co-Founder and CEO of Snapdeal.

The giveaway is effective today. Shoppers who buy from Snapdeal’s mobile site using an Android device will receive a notification that contains a Saavn Pro promotion code and a prompt to get the Saavn Android app. Once they download it and redeem that code, they’ll have access to the Pro service for two months.

Some caveats apply though. Saavn tells us that its partnership with Snapdeal will run for a year, and could include different offers from time to time. This particular deal will last for at least one month — possibly three months, we hear — but each user can only redeem one promotion code — so repeat shopping on Android devices doesn’t mean repeat free trials of Saavn Pro. But, hey, people are still getting some for nothing here.