The Pew Research Center has published a new study into Americans’ attitudes to privacy in the digital age. The wide-ranging survey, called Public Perceptions of Privacy and Security in the Post-Snowden Era, includes plenty of interesting tidbits but one stat that really stands out is how overwhelmingly U.S. consumers believe they have lost control over their personal data, owing to a perception that online companies are doing what they like with harvested personal info.

A full 91 per cent in the nationally representative survey of 607 adults said they agree or strongly agree that consumers have lost control over how personal information is collected and used by companies. That breaks down to almost half (45 per cent) strongly agreeing with the statement and 46 per cent agreeing. Just 6 per cent disagreed, and only 1 per cent strongly disagreed.

The study also found an overwhelming majority (88 per cent) of Americans agreeing or strongly agreeing that it would be very difficult to remove inaccurate information about them online. (Those folk may wish for the type of legal data protection framework that Europeans currently enjoy — which now requires search engines to process requests for delinking private name searches that have been associated with inaccurate data.)

And a similar majority (80 per cent) of those who use social networking sites expressing concern about third parties such as advertisers and businesses accessing the data they share on these sites.

Of particular concern to startups building businesses by harvesting personal data and selling intel on users to advertisers is that a sizable majority (64 per cent) of those polled believe government should do more to regulate ad company behavior and rein in what advertisers can do with users’ personal data. Only a third (34 per cent) thought government should not get more involved.

Despite almost universal levels of concern over a lack of control over their personal data — and a majority of Americans welcoming the idea of more regulation to control how their person data can be used — a majority of those polled still professed themselves willing to trade some privacy for free online services.

The study found that 55 per cent of those polled agree or strongly agree with the statement: “I am willing to share some information about myself with companies in order to use online services for free.”

Albeit the emphasis there should be squarely on the word some. Americans are evidently comfortable trading a degree of privacy for free services. But what they are almost universally uncomfortable with is trading an unknown level of personal privacy, thanks to having so little control once their data has been sucked up into the cloud.

Survey respondents rated different types of personal data differently in terms of sensitivity — with social security number topping the very sensitive list, followed by health-related data, the content of phone conversations and emails, and a person’s physical location over time. 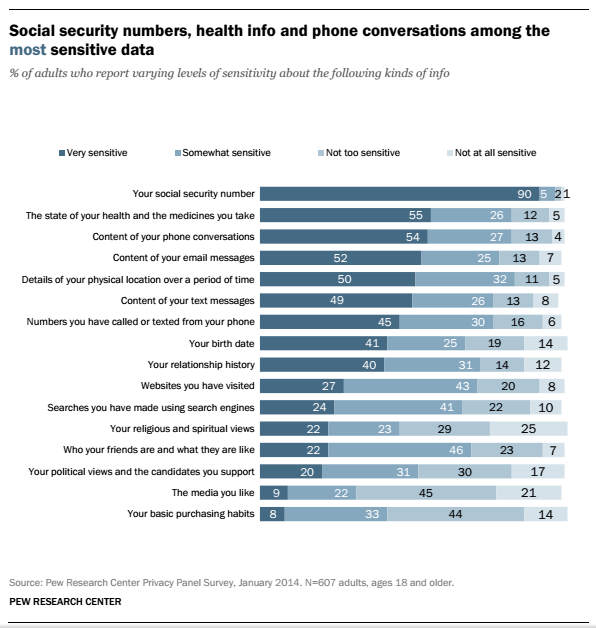 The Pew study also probed Americans’ attitudes to their government’s privacy infringements, in the wake of NSA whistleblower Edward Snowden’s revelations about the extent of dragnet digital surveillance programs. And again the research unearthed widespread levels of concern.

The survey found 80 per cent of adults agree or strongly agree that Americans should be concerned about the government’s monitoring of phone calls and internet communications. While just 18% disagree or strongly disagree with that notion.

The study also suggests concern about government spying is helping to feed general mistrust of digital services among Americans.

“One of the most notable findings in the study is that those who have heard the most about government surveillance are more privacy-sensitive across an array of questions in the survey,” noted Mary Madden, Senior Researcher at the Pew Research Center’s Internet Project and lead author of the report, in a statement. “Those who are more aware of the monitoring programs feel considerably less secure using any communications channel to share private information.”

When it comes to different types of communications technologies, the survey found social media sites attracted the highest levels of mistrust: 81 per cent of adults said they feel not very or not at all secure using social media sites when they want to share private information with another trusted person or organization.

While 68 per cent felt the same insecurities about using chat or instant messages to share private info. 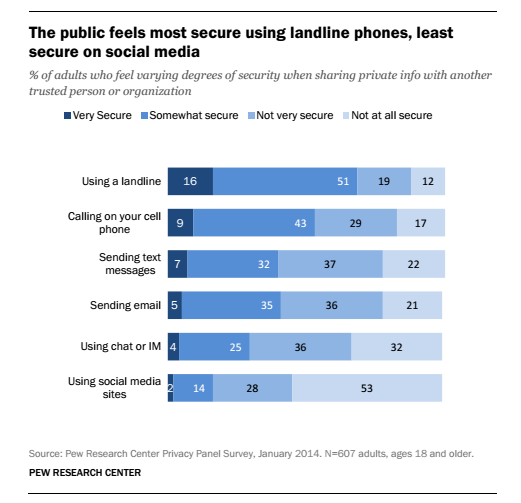 Pew’s study also asked respondents whether they feel their own efforts to protect the privacy of their personal data online are sufficient, and a majority (61 per cent) said they feel they would like to do more, vs just over a third (37 per cent) saying they do enough already.

That majority perception that web users could do more to safeguard their privacy represents an opportunity for pro-privacy startups seeking to make it easier for web users to secure their data. In the wake of the Snowden revelations last year we have already seen a swathe of privacy and security startup initiatives flourishing. This research underlines the underlying consumer concerns that are fueling that movement.