Editor’s note: Ian Thiel is the head of mobile at Optimizely, a provider of optimization software for web and native mobile apps.

Today’s consumers engage with their favorite brands through multiple touch points, ranging from social media, email and mobile. Smart marketers have embraced this cross-platform, cross-device ecosystem to uncover the growth levers that are integral to the success of their businesses. But many are hesitant to venture into the “new world” of mobile — they may not have a mobile strategy in place, or they may be unwilling to commit the capital to developing an effective one.

Fortunately, smart marketers have set impressive examples of using insights about their customers to figure out ways to engage them on mobile devices. Before we dive into these brand examples, however, it’s important to understand the market opportunity they recognized as a foundation for building their mobile presence.

To call the market for mobile apps “big” is an understatement, and businesses that don’t already have a mobile app should start thinking about developing one.

Ben Evans of Andreessen Horowitz forecasts the number of iOS and Android devices at 2 billion. It’s estimated that over the next few years, there will be approximately 3 to 4 billion mobile devices in use.

“Regardless of what you think of Yo as a product, one programmer got to 1 million pretty active users in a month with no funding,” Evans says. “How much would it have cost to support 1 million active users of anything in 2000? That is, mobile will expand the scale of the opportunity by 10x, while the cost to reach that  opportunity, at least in theory, has decreased by at least 10x as well.”

With the increase in devices in use, we also see how global spending on mobile advertising has advanced rapidly, nearly doubling to $19.3 billion between 2012 and 2013, according to the IAB. But Mary Meeker, an analyst at Kleiner Perkins, notes that mobile advertising has not kept pace with the amount of time people spend engaging with smartphone and mobile apps. In the next few years mobile will be the fastest-growing part of Internet advertising.

The ingredients that entrepreneurs and product owners need to produce a new website or smartphone app are readily available as open-source software or inexpensive pay-as-you-go services. A quick prototype can be put together in a matter of days.

L’Oréal’s Makeup Genius. In June, L’Oréal ventured to solve an ambitious problem. There are thousands of makeup colors out there, and it’s difficult for women to readily see what looks good and what doesn’t. The beauty giant built an app that instantly allows users to apply makeup to their reflections in real-time. 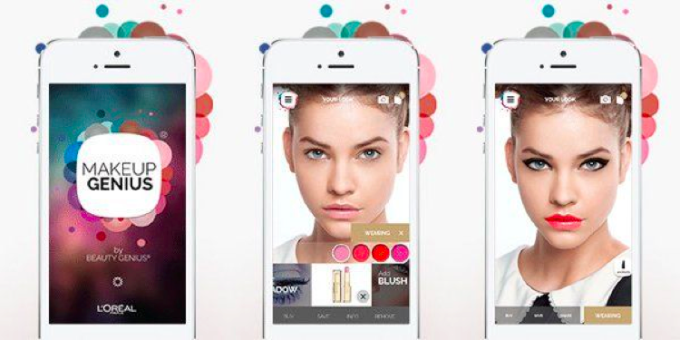 The company says the app has been downloaded more than 1.7 million times in the U.S. and France, the two countries where it’s available. Of course, L’Oréal hopes that this brand-building will lead to purchases, either through its built-in e-commerce platform or at a local store. L’Oreal, through mobile, has revamped a major part of the company’s core brand experience.

Comcast NBC Universal. In 2012, Comcast NBC Universal replaced traditional B2B sales tools with an interactive iPad app that featured the company’s catalog of films, TV series and other programming. The app, which was developed in three months, gave sales representatives in France a more compelling way to share the latest DVD and Blu-ray releases with retailers while using fewer resources.

Comedy Central. The Comedy Central app lets fans sync up with their cable or satellite providers and access full episodes of their favorite TV shows. The app promises full episodes, stand-up specials, and access to some older content – such as every episode of Chappelle’s Show. As a bonus, app users can also access “behind the scenes” interviews.

Services such as Netflix, HBO Go and Showtime Anytime offer enough content to bring out the TV aficionado in anyone. The flexibility of an on-demand streaming service offsets viewers’ overall propensity for watching ads, which represents a great opportunity for brands and advertisers.

So before building a mobile app, you need to ask yourself the following questions:

In a nutshell, you need to find out what your customers want.This process involves putting a prototype out there, measuring how users react, learning from the results and then starting all over again until you’re able to reach what is known as “product-market fit.”

There are a number of experiences your customers may have that brands are well-positioned to resolve through technology. Mobile apps can help you solve your customers’ pain points and craft innovative brand experiences in truly creative ways.

Every business does the best that it can with the resources it has. Mobile is a new resource. Use it.