A couple of new mobile applications for iPhone users offer a faster, and arguably more fun, way to free up storage space on your device by allowing you to quickly delete photos from your phone’s gallery. Both apps, Flic and the newly launched Cleen, are sort of like “Tinder for your Camera Roll.” As with the popular dating app, users swipe photos left or right (or up and down, in Cleen’s case) to delete photos, keep or favorite photos, as the case may be.

The two apps are very similar. Both are simply designed, require little set up and are easy to use.

With Flic, the experience is closer to that of Tinder. After launching the app and giving it access to your photos, you’re presented with one photo on the main screen. To trash the photo, you swipe left. To keep it, you swipe right. There’s also an “Undo” button if you make a mistake.

As you move through your gallery of photos, the “Trash” fills up. It even shows you the storage space you’ll regain as you delete photos from your phone – also done with a touch of a button, with a chance to review all the photos before their deletion. 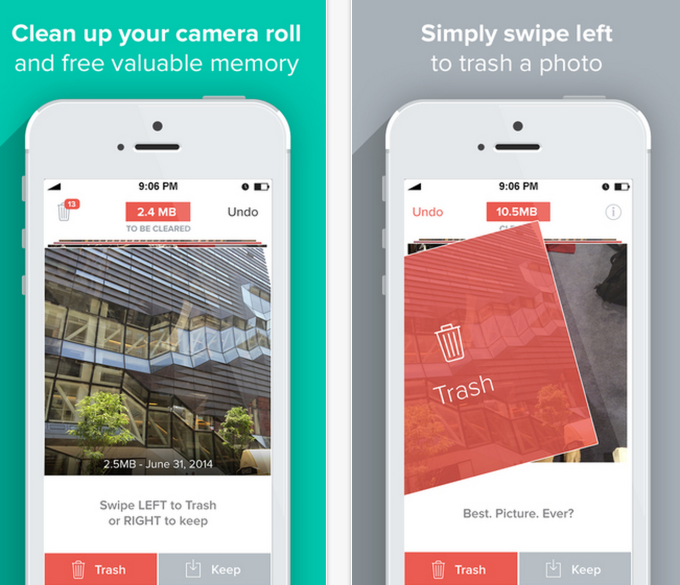 Launching today, a new app called Cleen from Tapsbook.com co-founder Sherwood Yao offers a slightly differentiated experience. Here, instead of swiping left to right to save or delete, you swipe up to favorite or down to delete. It also shows you how much room you’re saving via your deletions, and you can view your trash pile at any time.

In Cleen, photos are just a bit smaller than they are in competitor Flic, which can make it hard when trying to discern minor details when trying to decide what to keep, but it also introduces a few extra features. In addition to being about to recover storage space, the “favoriting” option means you’re able to fill up iOS’s “Favorites” album with your best photos more quickly than if you were swiping through iOS’s Photos app and tapping the heart icon on each one. And it also offers a “Later” functionality, which lets you bypass photos that aren’t either favorite-worthy or in need of trashing, but that you might want to review later. 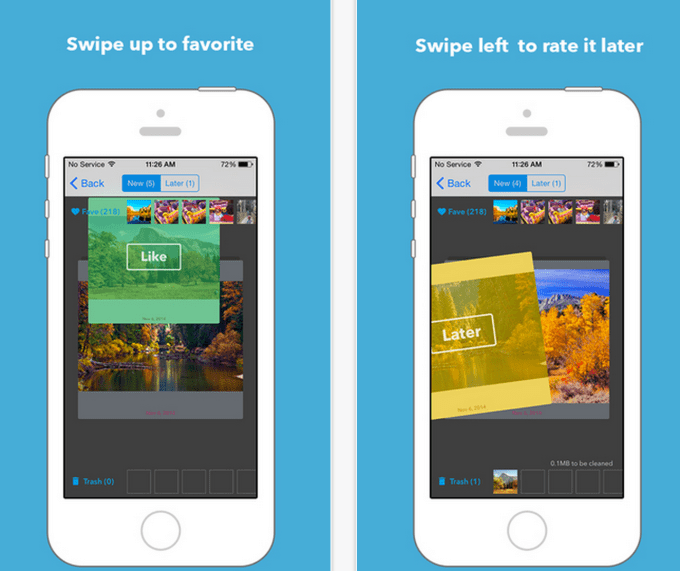 Though simple utilities, apps like Flic and Cleen can help play a vital role in managing iOS space in a world where users now rarely connect their devices to a desktop or laptop computer where they would otherwise have a more detailed view of what files are eating away at storage space.

As you may recall, when iOS 8 came out, a number of Apple consumers were slow to upgrade because the over-the-air download required a lot of space on end users’ devices in order to install. Users today will often delete apps and photos to free up space, but sometimes go about it without much guidance. With these photo management apps, you can now quickly see how much space you’re regaining as you move through your photos.

If only they made something like this for apps…