Motorola barely let the 2014 Moto X sink in before announcing essentially a beefed-up version of the same. The Verizon-exclusive Droid Turbo is a Moto X with a better battery and a better camera, but in a package that’s hard to describe as an “improvement” on the original. Where the Verizon phone excels, however, it really excels, which makes it a tempting proposition for those on or interested in Big Red’s network and services.

The Droid Turbo is basically anathema to my taste in smartphone design. It’s like the Ed Hardy T-shirt of smartphones. And some people will actually like that, as hard a time as I have understanding why. The materials that cover the device, including Kevlar finer and plastic, do seem to actually make it more durable as Motorola claims, but they also make it look like a misguided teenager’s Pinterest-fail budget version of a Fast and Furious street racer.

This version, which sports a backing material that feels like a backpack strap, is also fairly heavy in the hand, but there’s a very good reason for that – it’s packing a massive 3,900 mAH battery inside, which helps the Turbo claim battery life almost unheard of among today’s smartphones. The weight isn’t altogether unpleasant, either; after years of devices that compete with each other on drastic weight loss, having something a bit more substantial in the hand is actually nice.

Motorola has also opted for capacitive hardware buttons on the Droid Turbo, as opposed to the software keys now preferred by modern Android devices, including the Moto X. It’s a small thing, and on the one hand it means apps have more real estate in general. But it also means full screening won’t provide an entirely clean face, and it means that even when this phone gets its Android 5.0 update, it won’t change to the new button iconography Google has gone with.

Motorola offers some of the best software features in the business after recently shifting to a strategy of taking a mostly minimalistic approach to skinning Android. Its active notification screen is here, with battery-saving visual notifications of activity on your device when the phone is asleep, as is the ability to silence alerts or view notifications with gesture controls. Also here is the always-on voice assistant, which listens for a custom command of your choosing and stands ready for a litany of possible requests, including weather, traffic and just a general overview of the current state of your phone’s affairs.

All of Moto’s existing software features work as expected on the Droid Turbo, and they’re great. Without a doubt, Motorola is among the only companies to have actually done anything additive with its own spin on Android, whereas competitors like Samsung have generally thrown a lot of features ranging from useless to laughable into the mix. That said, this is a Verizon special, so the carrier couldn’t help but load up the device with some of its bloatware, including VZ Navigator. Droid Zap is genuinely cool, acting as a type of AirDrop service for quickly sending photos between devices, but the rest can go, since they really just do a subpar job of mimicking existing Android services.

The new features specific to the Droid Turbo are also great, insofar as they address the issues most people have with most devices. The Turbo has a huge battery that can sustain the device through 48 hours of normal use (and longer if you’re being conservative), plus it can load up eight hours of talk time in just 15 minutes, which is amazing for grab-and-go use during those busy days.

Droid Assist is also back, and is also a smart feature for remembering to do things like silence notifications when you forget. Also, the Gorilla Glass 3 screen, which Motorola advertises as “chemically strengthened,” is automatically insured for the first two years of ownership, meaning if you get the all-too-common spider shatter syndrome during the term of your wireless agreement, it’ll be replaced without pesky questions about your lifestyle choices.

The Droid Turbo packs a 2.7GHz Qualcomm quad-core processor and 3GB of RAM, meaning it’s no slouch in the CPU department. Its computing ability makes it more than able to handle the strains and stresses of running Android, and powering the animations that requires. It can also easily handle HD games and movies, and frankly at this point if I were to run into a flagship smartphone that encountered any kind of processing performance stutters, I would be very, very surprised.

It’s the performance of device-specific features that I’m much more interested in, and this is where the Droid Turbo can be better differentiated from the rest of the crop. The feature that lets it wake the screen when a hand approaches it, for instance, is too easy to set off accidentally, which means your screen will catch your eye, waking itself seemingly at random times while you’re working away at the computer or watching TV. Luckily, that doesn’t seem to impact the device’s battery life, thanks to its AMOLED display, which doesn’t activate areas displaying black, but it does manage to irk.

Motorola’s gesture-based camera activation is also a tough thing to actually activate in practice, requiring a very deliberate double-twist motion that feels ridiculous in real life and just isn’t something most users are going to take advantage of. A dedicated camera button would be awesome, especially given how crazy good the Droid Turbo’s shooter is, but this also isn’t a deal-breaking problem since it’s an optional feature that doesn’t really impact normal use of the device. 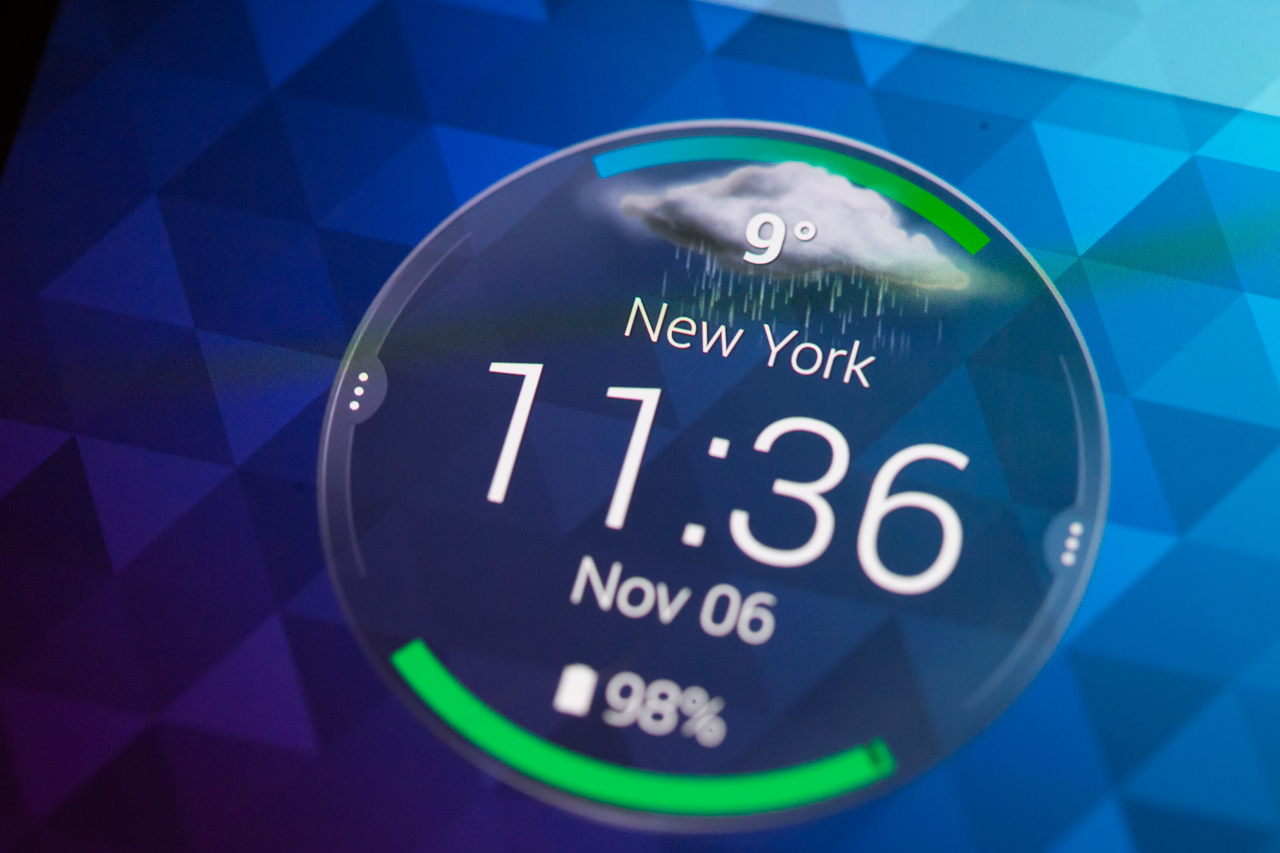 The Droid Turbo’s display isn’t one of my favourite aspects of the device. Motorola favors screens with high saturation and warmer colors, which aren’t my favourite. The displays tend to exaggerate, which results in unnatural images, which, while they definitely pop, don’t represent accurate color rendering. This probably helps the photos from the camera look as good as they do, but for general use of apps and web browsing it’s not ideal.

Advantages of the screen include the pure blacks of AMOLED, and the battery-saving features of said tech, which help the Droid Turbo last as long as it does. The display also claims a lot of durability, though I haven’t yet had any frightening drops to test Motorola’s claims. Lighting is evenly distributed, but you’ll probably have to crank brightness up and turn off the auto setting to get the most out of the screen in most indoor lighting situations. 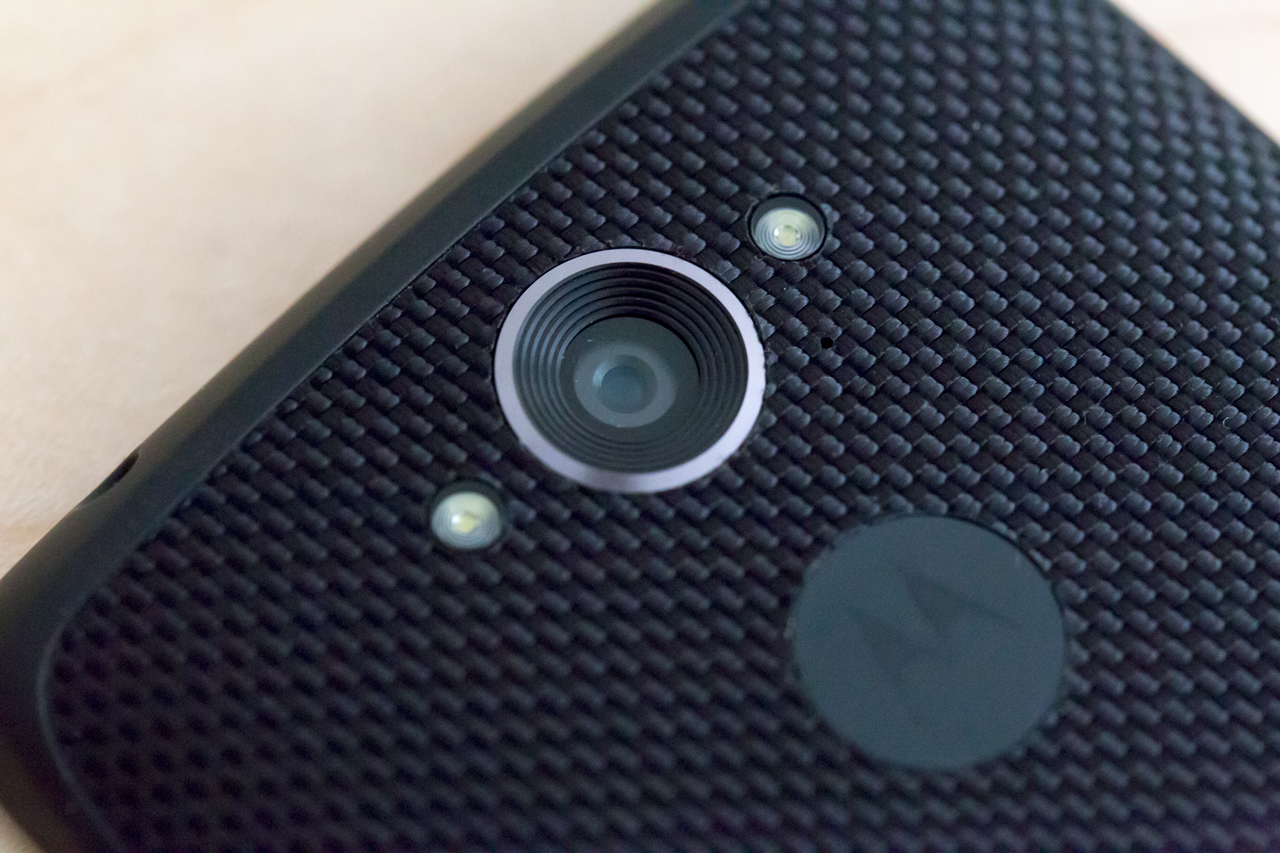 Motorola’s Droid Turbo shines especially bright in two areas, and this is one of them. The rear camera on the smartphone packs a 21-megapixel sensor and is capable of recording 4K video. It has a wide f/2.0 aperture and dual-led flash, and while it doesn’t have optical image stabilization, it’s very fast to lock in and shoot, and like a good photographer, it seldom seeks the crutch of flash firing, even in indoor lighting conditions.

The camera on the Droid Turbo is, quite simply, the best smartphone camera I’ve used outside of the iPhone 6 Plus. The 6 Plus probably has a slight edge over the Droid Turbo, but it’s a very slight one indeed, and the Droid Turbo might be better in some situations, like when it comes to achieving background blur effects on close-up shots like most of those in the gallery below.

Video captured on the Droid Turbo is likewise good, and 4K resolution will be a boon to some, but ultimately the lack of the kind of advanced cinematic stabilization that Apple has on their iPhones means it isn’t quite as good in this department. Still, as a still camera, the Droid Turbo is tops among currently available Android devices.

The other shining moment for the Droid Turbo comes with its amazing battery life performance. Motorola has indeed packed a huge powerhouse in this device, which in my experience has been good for two days of standard use, and more than that when used conservatively. I eked three days out of it with the kind of interaction you might expect from a user for whom a phone is just a phone, mostly good for occasional web browsing and checking maps, plus a few brief conversations.

The charge delivered to the phone in just 15 minutes of being plugged in also provides a lot of use time, and in general even when you’re in the red you can rest assured it won’t just give up the ghost right away. If battery life is a priority for you, this is the Android device you should get right now. Both with the Droid Turbo and the iPhone 6 Plus, this year I’ve felt like we’re reaching new standards of what constitutes long-lived, advanced mobile devices (and I do mean advanced, in case you were going to raise the spectre of BlackBerry devices of old).

The Droid Turbo is Motorola’s functional flagship, even if the Moto X gets that crown as a device available more generally, and with a design that’s much more palatable for general users. Luckily, it’s going to be available more widely under the name ‘Moto Maxx,’ which is good news for anyone not on Verizon. Those happy with, or willing to switch over to, Big Red should probably do so for the Droid Turbo — it’s that good of an Android device.

If there’s a caveat, it’s that the Droid Turbo is sort of fugly, heavy and big, which is not what everyone wants in their smartphone. Kudos to Motorola for focusing on packing as much functional excellence into this hardware as possible, however, even when that required sacrifices in terms of device bulk. As for the amateur street racer-inspired aesthetics – I guess you can’t have everything.