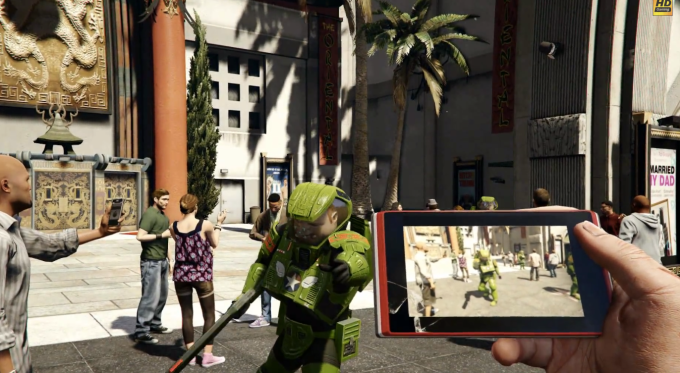 Today Rockstar Games unveiled some new footage of Grand Theft Auto from the version set for release on the PS4 and Xbox One on November 18 and the PC on January 27.

The biggest reveal: There’s now going to be a mode where you play as if it’s a giant open-world first-person shooter. This mode will be customizable, so you can play from a first-person perspective while walking around on foot and while driving but not while hiding behind cover during a gunfight.

This new perspective will give you a better view of the improved graphics throughout the game, including denser pedestrian population and traffic, a farther draw distance, and more complex weather effects. PC gamers with high-end rigs get the best visuals, as the PC port supports cranking the resolution up from the console’s max of 1080p all the way up to 4K. It also changes how you’ll experience the story, as events that take place in a mission happen around you rather than from the zoomed out view you got in the original (see: the scene where Trevor has to shake an unwanted passenger off of his plane in the footage below).

Along with better graphics, Rockstar has thrown a bunch of little improvements into the world of Grand Theft Auto V. The developer has stated that there will be 20 new species of wildlife, 150 new songs, more random chatter from pedestrians and 32 new vehicles.

Even though it’s only been a bit more than a year since the original’s record-setting release, Rockstar’s probably going to have quite a bit of success with this year’s revamp. In its most recent quarter, Grand Theft Auto V publisher Take-Two Interactive touted its continuing sales as a “key driver,” in part thanks to in-game purchases made in the multiplayer Grand Theft Auto Online, and this is the first opportunity PC gamers are getting to play and modify the game.

You can watch the footage below. Be sure to turn up the resolution so you can see the footage with more detail and at a smoother 60 frames per second: