Google today announced a number of new features for its Cloud Platform at its Cloud Platform Live event in San Francisco. True to form, the company also announced yet another round of price drops (and an unusual  price increase) for many of its cloud computing services.

Depending on how you use Google’s platform, those price drops could save you quite a bit of money.

In addition to these cuts, prices for Cloud SQL, Google’s relational database service, are also coming down by 25 percent, and that’s probably something more developers will notice on their monthly bills.

The company is also dropping bandwidth costs by quite a bit. Intercontinental network egress — traffic moving from the Google data center where you host your applications to a destination in the Asia-Pacific market — will now be up to 47 percent cheaper (from $0.21 to $0.12 per GB for the first TB of data, for example).

Sadly, though, it looks like Google couldn’t make those price drops happen for traffic to Australia — a country with notoriously high bandwidth rates. Also bucking the cost-reduction trend is Internet egress to China, which is actually becoming more expensive. Instead of charging users the same $0.21 per GB for the first TB of data it used to charge for all traffic to the APAC region (and which it still charges for traffic to Australia), Google has now raised this price to $0.25. 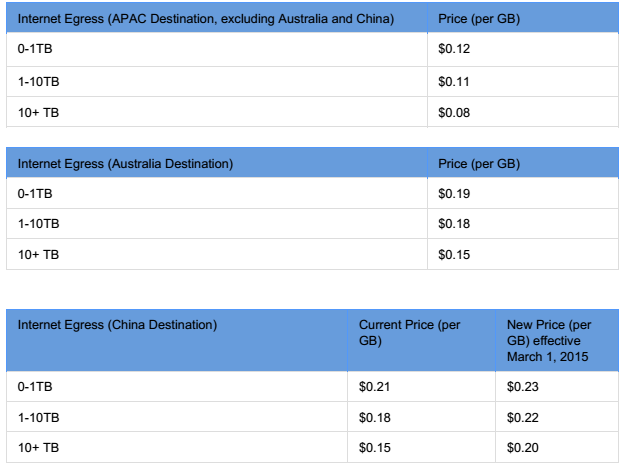